A climate change for the artisan

Will demand for eco-friendly goods mean a decline in artisnal skills?

In 1851, American writer Herman Melville wrote a novel that was then slammed as an apogee of American romanticism. A hundred and fifty years later, Moby Dick, the novel in question, appears wonderfully prescient. Now regarded as the Great American Novel, Moby Dic k is about the adventures of the wandering sailor Ishmael and his voyage on whaleship Pequod, commanded by Captain Ahab. Ishmael soon learns that Ahab seeks one specific whale, Moby Dick, a white sperm whale of tremendous size and ferocity. Ahab intends to take revenge. The novel is also a parable about where obsession takes us. Melville wrote Moby Dick when the industrial civilization was still incipient.

But much of the novel’s lessons ring true today, with climate change threatening us.

It is well known now that addressing the problem of climate change requires lifestyle changes. Some solutions might be difficult but others are not so. Consider handicrafts for example. A range of jute products—hand bags, files, office bags, table cloth and decorative wall hangings—can replace many utility and decorative pieces produced in factories. Utility and decorative items made by skilled artisans using bamboo, different kinds of grass and leaves are equally graceful and artistic.

Most states in India have hundreds of such biodegradable handicraft items. The classic Odissi paintings from Orissa, the delicate wood work of Bastar district of Chhattisgarh, the bamboo products from the northeast, the fine metal work from Tamil Nadu and Karnataka, Aranmula Kanaadi artwork of Kerala, terracotta and Kalighat paintings from West Bengal, the chikankari work of Uttar Pradesh, the Madhubani paintings from Bihar, miniature paintings from Bundi, the Batua craft of Bhopal and the Kangra paintings from Himachal Pradesh are some examples of India’s thriving craft traditions. Such a rich legacy, notwithstanding, India’s share in global handicraft market is only 2 per cent. The country’s Export Promotion Council is alive to such concerns. It has pegged the handicrafts export target at Rs 25,000 crore per annum by 2010.

On the face of it, the target does not seem unrealistic. Eco-friendly products are regarded savvy in the West and the developed world. This could work to the benefit of India’s more than five million artisans provided we have the right policy. But nurturing age-old skill amid commercialization might not be easy. Selling handicrafts is easy but preserving the age-old skill is difficult. History is testimony to the fact that mass production is inimical to the artisan’s skill. 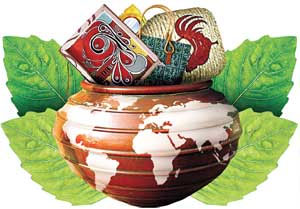 The market too demands diversity. But in the mad rush to produce for the market, the artisan does not get the time and support for quality and innovation. The design of mass produced items has been watered down or averaged to a level where idiosyncrasy has almost disappeared, and often is not valued. Artisanal production is contingent on moment-by-moment decisions, on innovations. In modern times, this has given way to rules, standards and procedures. So a number of artisans have lost the ability to create unique pieces in response to varying needs.

The present generation of artisans finds it difficult to recreate with sufficient artistry the more than 200-year-old pieces preserved in museums.

The Export Promotion Council’s ambitious target could be a mixed blessing for the artisan. The Indian handicraft sector must be ready to face the global demand in the changing global environment. But this should not mean sounding the death knell for age-old skills.

The government must identify senior artisans and give them the wherewithal and the time to bring innovation. Else the artisans could go the Moby Dick way.

Sudhansu Das is a journalist and writer in Pune