It is increasingly becoming evident that the world may not be ready for a binding international climate treaty at the ongoing climate summit in Cancun, Mexico. Global attention is now shifting towards domestic policies in the major economies.

Japan and South Korea plan to launch their own versions of national emissions trading scheme, while China is mixing command- and-control and clean energy promotion schemes to meet its energy intensity targets. The US is caught in a do-nothing trap and the EU is playing hide-and-seek to move towards its 30 per cent emission reductions target.

Amid these half-hearted but encouraging measures we also hear India is making noises about the launch of its domestic climate policy initiative, Perform, Achieve and Trade (PAT) scheme. To be launched in April 2011, the PAT scheme—announced as part of the National Mission for Enhanced Energy Efficiency (NMEEE)—is touted to be India’s version of a responsible citizens’ action on climate mitigation.

As per the new blueprint, specific energy consumption (SEC) targets are to be fixed for large energy-guzzling installations in the country and credits called Energy Saving Certificates, or ESCerts, issued for those exceeding their goals. ESCerts can be sold to installations which fail to meet their required cuts, thereby forming a new market-based mechanism over a period of time. 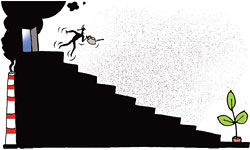 The Bureau of Energy Efficiency, with German agency GTZ, plans to cover 700 installations in nine sectors—thermal power, cement, steel, fertilisers, aluminium, chlor-alkali, paper, textiles and railways. It claims 10 million tonnes of oil equivalent of energy savings is expected by 2015. Besides, it claims the scheme will aid in energy security, technology upgrade and lower environmental impacts. However, a closer look at the policy design shows pitfalls.

Essentially PAT will be structured on the basis of unit-level benchmarking of energy used per unit of output, that is, SEC. This can vary widely across two units making the same product, but with different manufacturing processes. It can also vary among old and new plants that have different plant sizes, capacity utilisation levels and grades of raw material used.

This could well mean a number of outdated public sector factories are to be clubbed with their private counterparts. Over time it could emerge that due to wide performance variations, public sector undertakings (PSU) mostly end up buying credits generated from private entities.

Any attempts by BEE to soften targets for PSUs will create doubts about fair play, lower price of the certificate, or disrupt the scheme altogether. Second, since the scheme is devised on energy consumption alone, benefits gained from CO2 emissions due to types of fuels used are ignored. As a result, units may not be able to claim their due for using a low-carbon but expensive fuel like natural gas or renewable biomass.

One may argue that using such fuels depends on availability and infrastructure, but discounting higher environmental benefit may harm long-term promotion of low-carbon fuels. Third, mechanisms for price stability are yet to be announced. When asked, a senior government official admitted that the government under international pressure announced a scheme hastily in 2008, even before working out modalities. Now it is left to the staff to physically measure individual baselines for hundreds of factories within a short span and prepare a face-saving mechanism.

Thorough, unbiased research is needed on PAT’s environmental, economic and social implications. Uniform benchmarking, modest carbon taxation, among others need to be explored. The announcement of a national clean energy cess of Rs 50 (US $1) per tonne of coal in the 2010-11 budget indicates that the alternative policy ideas for climate mitigation are indeed not out-of-bounds.