India’s population and cities are set to double by 2030. Can it cope with the pressures?

The population of India would double over the next 20 years; almost all its cities would experience a twofold expansion during this period. No part of the world has ever seen such staggering urban growth.

Cities like Paris stabilized their population sizes at about two million. Although Greater Paris has six-seven million people, its population growth is nearly zero. Cities like Brussels are seeing a decline in population and the governments are worried about the challenges of re-urbanization. But this is not the case with Indian cities.

Take Thane, a Mumbai suburb, for example. Its population, currently at 1.4 million, is expected to rise to three million by 2030; its area is set to expand to 170 sq km from the present 105 sq km.

The pressure on land, energy, water and waste disposal is mounting. While the man on the street expects the government to pull rabbits out of the hat, the fact is there is no way we can generate the amount of water and energy we need in the future. So what does one do?

Builders over the past 100 years had the luxury of managing the supply-side. It is time for planners and engineers, be they in government or in businesses, to manage the demand-side. They need to engineer sustainability in buildings without compromising the convenience of the occupant. This is possible with some simple and affordable technologies. By putting basic regulations in place at the municipality level any city can reduce energy demand by 50 per cent and freshwater use by up to 60 per cent. For instance, regulations on waste disposal for houses and offices can save millions of litres of diesel burned to transport the waste across the city. US city, San Francisco, has reached a point where it aims at zero dumping in scientific landfills—our municipal corporations have defied for three years a Supreme Court directive that mandates the creation of such landfills to prevent groundwater contamination. 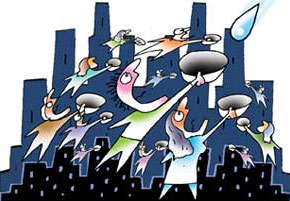 In water supply, 24x7 has been a pipedream for India (to mix a metaphor). The pipe culture that came to India in the 1960s sounded the death knell for the thousand years of sustainable water supply and water treatment systems our culture was renowned for. To conceal their lack of expertise and vision, governments and municipalities said smugly that people would use more water if offered 24x7, and so they restricted the supply to one day a week. In the 1980s, they sort-of admitted they didn’t have the capital to create additional infrastructure to meet the growing demand. Into the 1990s, they still refused to accept it was their inability to plan the source of water, storage capacities, efficient distribution and disposal, including recycling of wastewater.

It is in the past five to eight years that a few cities have woken up, mostly because of a few unsung heroes in government. Bhopal for instance, had one engineer displaying ingenuity. He asked a simple question: “Why would I recycle the wastewater for industrial use? Can I not treat the water at a lower level of purity and supply it to outlying farmlands?” It took him a few months to show how to save money on water-recycling plants in cities. He cut the cost involved in maintaining pipelines to industries that were not willing to pay; supplied farmers who paid the same tariff as industries; and saved expenditure on the water-treatment equipment because he did not have to purify water to the requirement of industry. The engineer recognized the opportunity to earn from wastewater. He did not stop there. He ensured that the water supplied to farmers also recharges the groundwater. Now he plans to see to it that the outlying agricultural districts of Bhopal turn away from farm practices that contaminate the groundwater with toxic chemicals. This would also close the loop on sourcing and managing one’s own freshwater.

Several city administrators, like the Pune municipal corporation, are also leading the green charge, with incentives to encourage builders to go green and by punishing those who flout the thresholds of resource management or disposal. All the urban planners need is to devise simple technologies and apply common sense to lead the 3,600 Indian cities into the future.

Chandrashekar Hariharan is the CEO of Biodiversity Conservation India in Bengaluru