The International Rice Research Institute (IRRI) completed 50 years in December 2010. Its gene bank holds over 100,000 accessions of rice from 125 countries. Roughly 80 per cent of these are varieties developed by farmers. Since 1959 when IRRI was conceived as a benevolent corporation, much has changed in research and development in agriculture.

The private sector has emerged as a major player in the development and spread of agricultural technologies. Today seed technologies are subject to various forms of intellectual property regimes. The rice research institute has embraced corporates and IPR, and not countered them. This is not because it has to, but because it wants to. In doing so the institute has compromised its intended service to “poor rice farmers” and National Agriculture Research and Extension Systems in developing countries. India and the many rice-growing farmers across Asia will now see reduced public services of IRRI as it cosies up to the corporate sector even more and begins to look and behave more like a private company.

IRRI’s Board of Trustees confirmed the institute’s new policy on intellectual property rights (IPR) at a meeting at Hanoi, Vietnam, in November last year. A draft had been under discussion much before. Despite requests from farmer groups and NGOs, the text was not made public, till recently. The final four page document in effect now comprises a Preamble with 10 “general principles”.

The policy makes IRRI’s pro-IPR stance clear. It states IRRI may seek protection of its intellectual assets (including germplasm) or impose restrictions on its use by others. The new policy unabashedly proclaims that IRRI shall enter into formalised collaborations with the private sector. So much for its public mandate.

The legal status of planting material at a global level also changed in 1993 from it being a free-for-all “common heritage of mankind” to national sovereignty as per the Convention on Biological Diversity (CBD). This concept of sovereignty is meant to recognise local peoples’ contributions, for example farmers’ role in crop evolution through seed conservation and variety selection. IRRI has the responsibility to keep this farmer-developed material “safe” as an international public good (IPG). That means free from any IPR that converts it into a private good.

As with any planting material collected pre-CBD— before 1993—this rice is governed by rules of the UN’s Food and Agriculture Organization (FAO). IRRI had in 1994 signed agreements with FAO to hold the collections in trust. When passing on the rice germplasm, the IRRI was bound to sign a material transfer agreement that requires the recipient not to seek IP protection on the material. But this obligation got diluted when FAO’s International Treaty on Plant Genetic Resources—known as the plant treaty—came into force in 2002. So IRRI’s 1994 Agreement with FAO lapsed and got replaced by a 2006 Agreement with the Governing Body of the Plant Treaty. Even then, IRRI cannot claim ownership over rice in its gene bank.

Notably, in IRRI’s IPR Policy of 2010 the word “trust” with respect to gene bank material has been dropped. The policy does not have any commitment that IRRI made in its 1994 Policy to not seek any form of intellectual property protection on the rice genetic resources it holds in trust.

The new policy also endorses “biotechnological innovations” in agriculture like genetic engineering. Protocol III of the old IPR policy has been replaced by a general principle on “biotechnological innovations”, which makes clear that IRRI will respect IPR others have on materials and methods used in the development of GM crops. With its privileged access to farmers’ seeds IRRI ought to be respecting both farmers’ needs and their beliefs. Farmer seed systems are based on free exchange of planting material. 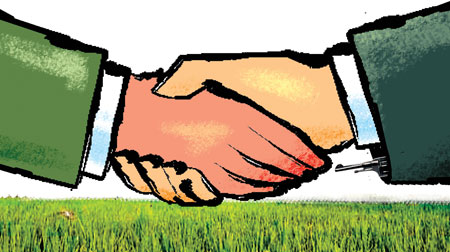