The Himachal Pradesh government has asked forest dwellers in the state to put forward their claims to forest rights. But it is being cautious in implementing the Scheduled Tribes and Other Traditional Forest Dwellers (Recognition of Forest Rights) Act, 2006, or fra. The act is being implemented only in the tribal areas of Lahul-Spiti and Kinnaur districts and two sub-divisions of Chamba.

Some of the caution is justified. To understand why one has to go back to the colonial times. The colonial state exploited the forests in the western Himalayas, but it tried to keep communities in the region on its side. It undertook elaborate forest settlement exercises for the purpose. Entitlements of forest dwellers are therefore well-recorded. Implementation of fra will provide a sound legal basis to these entitlements.

But there is a marked difference between forest dwellers in Himachal and the tribals of central India. The Kinnauras, the Lahaulas and the Gaddis of Bharmour, for example, have private lands where they cultivate cash crops. During the land reforms of the 1950s, and of the 1970s, the state provided at least five bighas (0.4 ha) of land to all households. Even then many landholders, especially in apple-growing districts of Shimla, Kullu and Kinnaur, encroached on forest areas adjacent to their holdings. According to a 2004 official count, there were 15,621 encroachments and 3,300 ha of forestland was illegally occupied.

The encroachments and allotments during the land reform virtually decimated the village commons. As a result, forestlands became an important fallback for the rural poor to meet fodder and fuelwood requirements. It is this fallback that is in danger of being virtually privatized if fra is not sensitively implemented in the state. 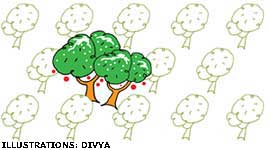 fra also provides for community forestland. It empowers communities to protect, manage and stop any undesirable activity in such tracts. So the act gives village institutions a say in the diversion of forest resources for projects like hydroelectric and cement plants. That is why environmentalists like Kulbhushan Upmanyu, a Chipko leader, have been advocating the government should give preference to community forest claims than individual claims. They also suggest that instead of implementing the act in just the scheduled areas, the state government should restrict the well-off from reaping the benefit of traditional forest rights or set a maximum limit on the amount of land that one can claim. The Himachal government has, in fact, specified the limit--maximum of 20 bighas (1.6 ha). But the stipulation is on weak legal footing because it has not asked for any amendment in the act.

The Union minister for tribal affairs has specified that a person need not live on forestland to be a "beneficiary under fra". Most people in Himachal Pradesh therefore fall in the category of 'Other Traditional Forest Dwellers'. The government, however, is tight-lipped about implementing fra in the non-scheduled areas. If fra is not implemented with sensitivity, there might be a spate of fresh encroachments on forestland.

For now, it seems the state government has acted only when pushed by the Central government's directives on fra. The formation of village-level forest rights committees in gram sabha meetings in April 2008 and the cursory trainings at the panchayat level in late November have all been low-key affairs.

There is another problem, peculiar to Himachal. Village communities here are not as cohesive as in other parts of tribal India, putting a question mark over how to manage community forests. The Himachal government, it is true, is in an unenviable position. Having said that, its efforts lack sincerity. It can learn from Madhya Pradesh, which has implemented fra on a priority basis.

Rahul Saxena is with the Kangra-based NGO Lok Vigyan Kendra