Parkinson’s Law of Triviality states that the time spent on any item on a committee’s agenda will be inversely proportional to its significance. This seems to be happening with the Ministry of Environment and Forests (MoEF). The minister has moved a bill in the Rajya Sabha that seeks to amend the Indian Forest Act (IFA) of 1927. One would think that when a colonial-period forest law is being amended for the first time in 65 years, the government would try to bring it in line with the stated goals of the National Forest Policy of 1988 (NFP88) and the Forest Rights Act (FRA) of 2006. Unfortunately, the proposed amendment focuses on trivialities and, even there, betrays an outdated mindset.

The amendment would enhance the power of forest officers to “compound offences”, which is legalese for imposing fines on the spot instead of arresting people or confiscating property. One amendment is to get rid of salary-based limits on who is empowered to compound offences. The original provision is archaic and must be removed because the authority is best defined in terms of rank, not salary, and the rank is already defined in IFA. So far so good.

The second amendment proposes to raise the maximum fine from Rs 50 to Rs 10,000. Certainly a fine of Rs 50 in 1927 would be equivalent to several thousand rupees today, although Rs 10,000 is too high a number by most calculations. In theory, the higher limit may make life easier for the offenders by allowing them to pay a fine than be arrested. But how does one ensure that this would not increase corruption?

Then the third amendment requires that in Scheduled Areas, the forest officer shall record the views of the gram sabha before imposing the fine. Is this useful? To answer these, some more fundamental issues need to be addressed. First, what are forest offences? Should acts considered an offence by a colonial government continue to be treated as such? IFA and its precursors made most forests the property of the government. Simply entering a reserve forest without permission was (and still is) an offence worthy of arrest. Anything that is not expressly permitted in a reserve forest is prohibited. Large tracts of forests which people had been using were “reserved” by the British. 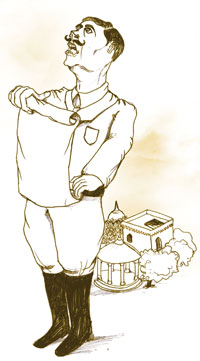 Is this tenable in independent India? Given what we know about colonial forestry and the extensive dependence of communities on forests, and given that the NFP88 acknowledges the need to meet local needs, shouldn’t the categories, rules and boundaries of forests be fully revised?

The second fundamental issue is: how do we enforce forest rules in a way that ensures not only sustainability but also fairness, transparency and accountability? The colonial forest department treated the forest as its property and was accountable for its upkeep. Working plans were written in English and accessed only by foresters. Hundreds of princely states were allowed to have their own procedures. Zamindari was promoted in many areas to simplify revenue collection, at the cost of the welfare of the tenants and forest dwellers.

But a democratic country, in which almost all forests are inhabited by people and which even today has 100 to 250 million forest-dependent people, would surely require a different governance system. Democratic governance means rules are framed through democratic debate at local level. Wider public interests are ensured in a federal polity by setting outer limits to what local governance can do. This does not, however, mean that all day-to-day operations and enforcement of these rules require consulting the entire general body.

Thus, the third amendment is not just mere tokenism, because it simply asks that the views of the gram sabha be recorded, not necessarily followed. It is also impractical because the whole purpose of spot fines is to avoid long-drawn legal processes. Can a village general body convene to discuss every spot fine imposed? The issue is not whether forest officers should have powers to impose fines. The issue is who appoints the forest officer, who defines the offences and the fines, and who the officer is accountable to. Why should the gram sabha give views on someone being fined by a forest officer who is appointed by the state to protect its property against use by the villages? If the people have rights in the forest, then they would be concerned about any theft from the forest. But then should it not be the people who appoint their forest guards, who will police their forest against misuse, and will impose a fine as per rules of the gram sabha? The proposed amendment maintains forests as state property, maintains the criminalisation of forest use, and maintains that the control rests with the forest department, while making a meaningless gesture towards local communities in the name of accountability.

What the MoEF minister should be really focusing on is the restructuring of Indian (colonial) forest law and administration to address the demand for democratic decentralisation, a demand which began with Chipko and finally found voice in FRA. Such restructuring involves handing over of rights, responsibilities and powers to forest-dependent communities within a well-defined sustainable use framework. This is an enormously challenging task.

First, as mentioned above, IFA is part of a colonial legacy that started with the premise that forests are primarily for the benefit of the state. The colonial forest department was set up as the owner, manager, police and policymaker all rolled into one. Post-Independence, unfortunately, even the limited space for recognising local rights through the IFA’s “forest settlement process” was given the go by as large tracts were notified with the stroke of a pen. Having enjoyed these sweeping powers for over 150 years, the Indian Forest Service is the biggest opponent of any meaningful decentralisation and accountability.

Secondly, there is a historical diversity of legal land categories and forest rights, such as private forests, clan forests, individual privileges, conversion rights and grazing rights, that make a single all-India Act inappropriate.

The recent agitation in Jharkhand by those who do not want to give up rights enjoyed under the Chhota Nagpur Tenancy Act (paradoxically also a colonial artifact) reflects this diversity. In other cases, opposition to democratisation of forest law may come from local elites that have benefitted from highly unequal forest rights settlements, such as in the Western Ghats. The legal status of forestland in many other places is highly murky.

Finally, there is tremendous pressure from the development lobby to not give local communities control over forests as it would come in the way of diverting forest land for mining, hydropower projects, resorts and biofuel plantations. There is equal pressure from those who would stand to lose their subsidised rates for bamboo procurement or their monopoly over the beedi leaf trade if local communities asserted control over forest produce.

Nevertheless, if the MoEF minister is serious about improvements in forest governance, she must tackle this complexity head on. She could begin by amending the Forest Conservation Act to give legal basis to the ministry’s own 2009 order requiring an NOC from the gram sabhas affected by any proposed forest land diversion. She could cancel private contracts on minor forest produce (MFP) in areas where communities have been given MFP rights under FRA. Seriously implementing the community rights provisions of FRA and expanding their scope by revamping IFA would be the next step.

Finally, unbundling the forest department to separate the work of hands-on management in remote areas from a regulatory role in community-managed areas would be the logical conclusion. MoEF’s committee on FRA and future forest policy, which submitted its report in 2010, has laid down a road map that the minister could use. Using dirty band-aids will be counterproductive when drastic surgery is required.

Sharachchandra Lele is a senior fellow at Centre for Environment and Development, ATREE, Bengaluru, and was a member of the MoEF-MoTA joint committee on Forest Rights Act