Sub-Saharan Africa is on the brink of starvation. In spite of efforts made by the government and private organisations, the agricultural scene appears dismal 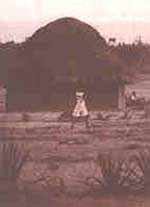 ONE-THIRD of all Africans are undernourished. It is shocking to learn how rapidly and dangerously food security continues to deteriorate, particularly in sub-Saharan Africa. Soil fertility is on the slide, yields per hectare of principal food crops are declining and population growth has exceeded growth in food production in most African countries over the last 15 years. Every year, more than four million African children die before reaching the age of five. And the number of the poor is expected to increase by 50 per cent by the year 2000.

The World Bank (WB) estimates that African countries must increase iigricultural production by four per cent per annum, if all its citizens are to become secure as far as food is concerned. African agronomists are optimistic. For them the brightest spots being the growing number of community based efforts that are successfully increasing productivity. But scattered local success stories are not enough to tackle the present situation.

Years of neglect and practice of faulty farming techniques have ruined the farmlands. Improvement of agricultural productivity and sustainability can be achieved, since the land was once fertile. But the quick growth in production that one saw in south and southeast Asia during the Green Revolution of the '60s and '70s cannot be duplicated in most African countries because the basic infrastructure like the network of roads, irrigation systems and agricultural finance and land tenure systems are not adequate. The continent's acute shortage of water for agriculture is particularly glaring.

High priority needs to be given to the establishment of secure land tenure systems. These systems must provide farmers with long-term loans so that they overcome investment phobia. Also, farmer-oriented credit systems are essential for providing funds for buying seeds and fertilisers. Upgrading the fertility of Africa's soils is probably the most urgent, and in many ways the most difficult part of anti-hunger strategy.

This support should be made available both directly to the international research centres and to African scientists working in viable national agricultural research systems and networks. The objective of this kind of effort is to make available to farmers large quantities of organic nutrients, to produce enough surplus to ensure their country's food security.

In addition to this, the Bank should try to develop major off-farm sources of affordable phosphorus for African farmers as rapidly as possible. Here, the International Fertilizer Development Centre will have a key role to play. Without more phosphorus in most African farming systems, production will fall, even with the provision of enough nitrogen.

How these nutrients can be produced, distributed and paid for is far from clear. Many Africans believe that some sort of temporary fertiliser subsidy, national or international, should be considered, keeping in mind the urgency of restoring soil fertility.

Sustainable farming systems that will help farmers combat climatic stress, diseases and soil problems are yet to be developed and tested for many of Africa's agro-ecological zones. Acidtolerant legumes, hardy food crops and integrated pest management systems must be developed for the farmers.

All efforts should be made to convince African govern- ments about the seriousness of their food security problems, and the inevitable damage if they fail to take early and effective action to promote agricultural development and family plan- ning. The governments should aim at getting as much cooper- ation as possible from all donor countries for supporting their action plans.