India’s renewable-rich states have a higher share of variable renewable energy than most countries. As a result, many are already facing system integration challenges 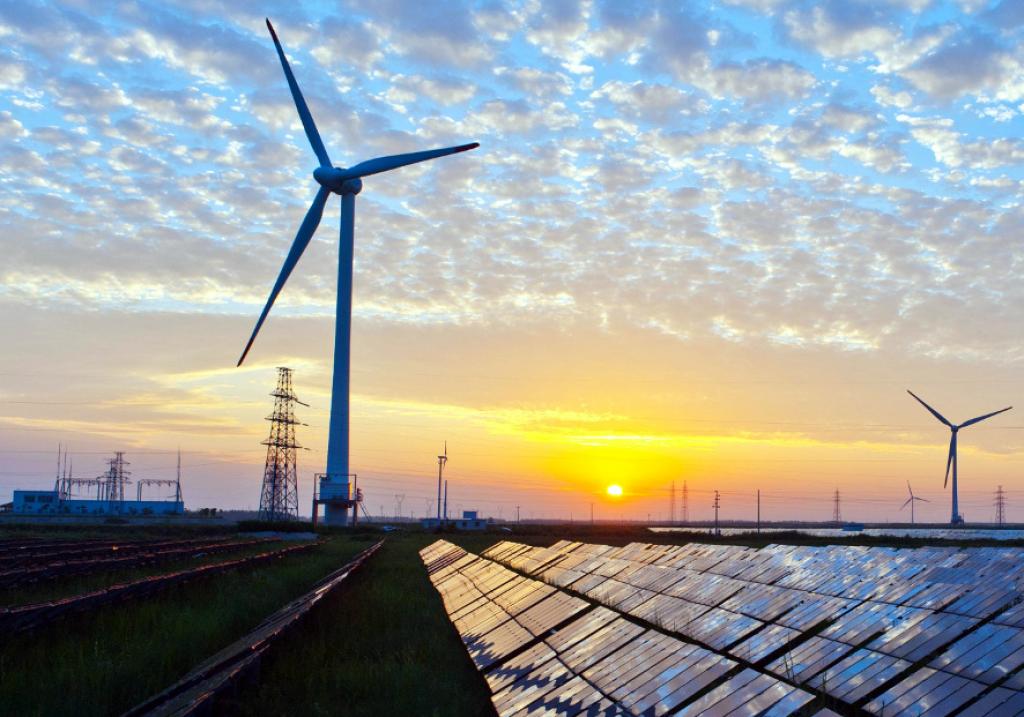 The penetration of renewable energy in India is highly variable across states. The share of solar and wind in India’s 10 renewable-rich states — Tamil Nadu, Karnataka, Gujarat, Rajasthan, Andhra Pradesh, Maharashtra, Madhya Pradesh, Telangana, Punjab and Kerala — is significantly higher than the national average of 8.2 per cent.

Solar and wind account for around 29 per cent of annual electricity generation in Karnataka. It is 20 per cent in Rajasthan; 18 per cent in Tamil Nadu; and 14 per cent in Gujarat in financial year 2020-21.

India’s renewable energy-rich states already have a higher share of variable renewable energy (VRE) than most countries. As a result, many states are already facing system integration challenges.

The blog addresses the demand-side flexibility, power plant flexibility, storage (pumped-storage hydro and batteries) and grid flexibility, as well as policy, market and regulatory solutions for the short to medium term.

In the coming decade, the Indian power system is due to undergo an even more profound transformation. The Union government is planning to increase renewable generating capacity from to 450 GW in 2030 from 175 GW in 2022. Some state leaders have expressed concerns that they will face excess VRE generation and will need to:

Recent trends underlying the main renewables integration challenges include the increasing variability of hourly demand, the need to ramp up requirements due to the impact of solar on net demand, short-term frequency variations and local voltage issues.

Power system transformation in India can be supported by the transformation of electricity demand from passive consumption to more proactive participation by demand sectors. Agricultural users already play an important role in balancing power supply and demand through involuntary irrigation load shifting.

The existing agricultural demand shift — from high to low demand hours — already provide a significant source of low-cost power system flexibility in India and has assisted some states in reaching high levels of solar and wind penetration without major system events.

This shift has been largely enabled by the availability and use of existing distribution networks dedicated to agricultural users in certain states, which allow the system operator to control irrigation loads without impacting other grid users.

Time-of-day (or time-of-use) tariffs for the industry are offered in most states as the basis of the existing industrial demand response incentive. In the medium to longer term, a shift towards time-of-use tariffs as the default option is recommended, following the rollout of advanced metering infrastructure, for the activation of demand response potential from buildings and transport (such as cooling and electric vehicle smart charging).

On the residential side, shifting towards advanced digital metering, automation and smart home appliances is a prerequisite, while ensuring cybersecurity and avoiding proprietary standards that could limit interoperability and consumer choice.

State system operators and discoms are concerned about the rise of rooftop solar systems, due to their impact on discom financial stability (from revenue loss), distribution system issues (from reactive power, voltage impacts and reverse power flows) and demand forecast uncertainty.

A joint report by NITI Aayog and International Energy Agency (IEA) highlighted international experiences, illustrating how these can become system-friendly assets and support the low-voltage network with voltage stability and reactive power.

To improve the visibility of rooftop solar assets in India, connection codes need to stipulate the registration of individual systems, with state- and national-level registers of these assets. The rooftop solar database should first be built-in in states. Later, a national-level standardized interface and data model can bring more efficiency and transparency.

Most states are concerned about the future role of existing coal-fired power plants. Coal plants are expected to operate less as renewable technologies supply more generation, which leads to reduced revenues.

At the same time, to operate flexibly and meet stricter emissions standards, some coal plants may also require further investment. Such investment needs to be weighed against investment in flexibility sources in other parts of the system (storage, demand and grids) and emission reduction targets.

In the Stated Policies Scenario (STEPS) of the International Energy Agency (IEA) World Energy Outlook (WEO), coal capacity in the Indian power system will increase to 269 GW by 2030 compared to 235 GW in 2019. The analytical results of the IEA India Regional Power System Model show that the use of coal power plants in India will change dramatically by 2030.

The use will shift from typically steady baseload operation to frequent operation near minimum and maximum output levels. Coal plants in some states have the potential to better support the integration of high shares of VRE with increased flexibility, such as faster ramp rates, lower technical minimum levels and shorter start-up times.

Retrofitting hydropower plants to allow operation in pumped-storage mode seems to be the preferred storage solution in many states in India. However, batteries are also likely to play an important role in India.

An analysis by the Lawrence Berkeley National Laboratory suggests that battery storage coupled with solar farms can be a more cost-effective solution than pumped-storage hydro retrofits for morning peaks or evening ramps requiring storage duration of less than six hours.

The optimal sizing and location of battery storage will differ by region and will require detailed studies in each state.

India’s wholesale power trade achieved important milestones in 2020, with improved trading across Indian states and the introduction of real-time markets and green markets.

Since 2020, the real-time market has filled an important gap by providing corrections an hour ahead of the timeframe for variable and uncertain generation such as solar and wind. The newly established green market enables clients such as the discoms to fulfill the states’ renewable purchase obligations through market purchases.

Analysis based on the IEA India Regional Power System Model suggests that additional power trading across states is an effective renewables integration solution that could reduce curtailment by around 2.5 per cent in the STEPS in 2030. However, significant barriers remain to reach this potential. These include:

Some level of curtailment is present in most systems with high solar and wind penetration, typically up to 3 per cent of annual solar and wind output.

While renewables have must-run status in India, renewable generators can be curtailed due to system security considerations. Tamil Nadu and Karnataka, for example, have seen solar and wind curtailment in recent years. 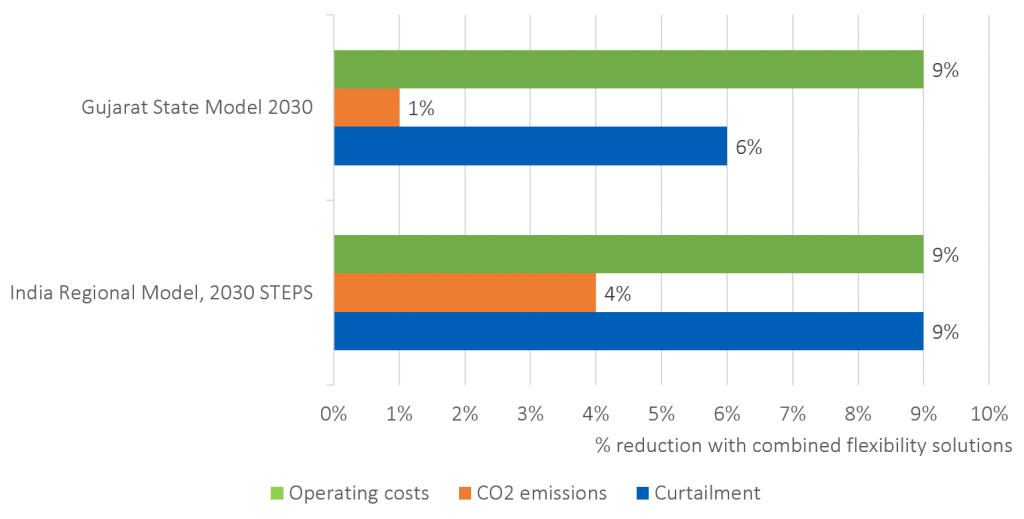 Reductions in curtailment, CO2 emissions, and operating costs due to combined flexibility options in India and Gujarat. Source: IEA

Increasing solar and wind generation curtailment and lack of related mitigation policies are major concerns, particularly for investors. Power sector investment in India fell by $10 billion to $39 billion in 2020, including a decline in solar and wind investment due to the impacts of the novel coronavirus disease (COVID-19) pandemic.

Improving investor confidence will be important in the coming years as India aspires to attract greater power system investment. To better address curtailment risk, discussions on the future of the must-run status of solar and wind must continue.

Formulating practical contractual structures and policies related to compensation for curtailment will be critical.

Increasing power system flexibility enables the integration of higher shares of solar and wind generation. As a result, for a given amount of solar and wind capacity, a larger share of renewables can be utilised.