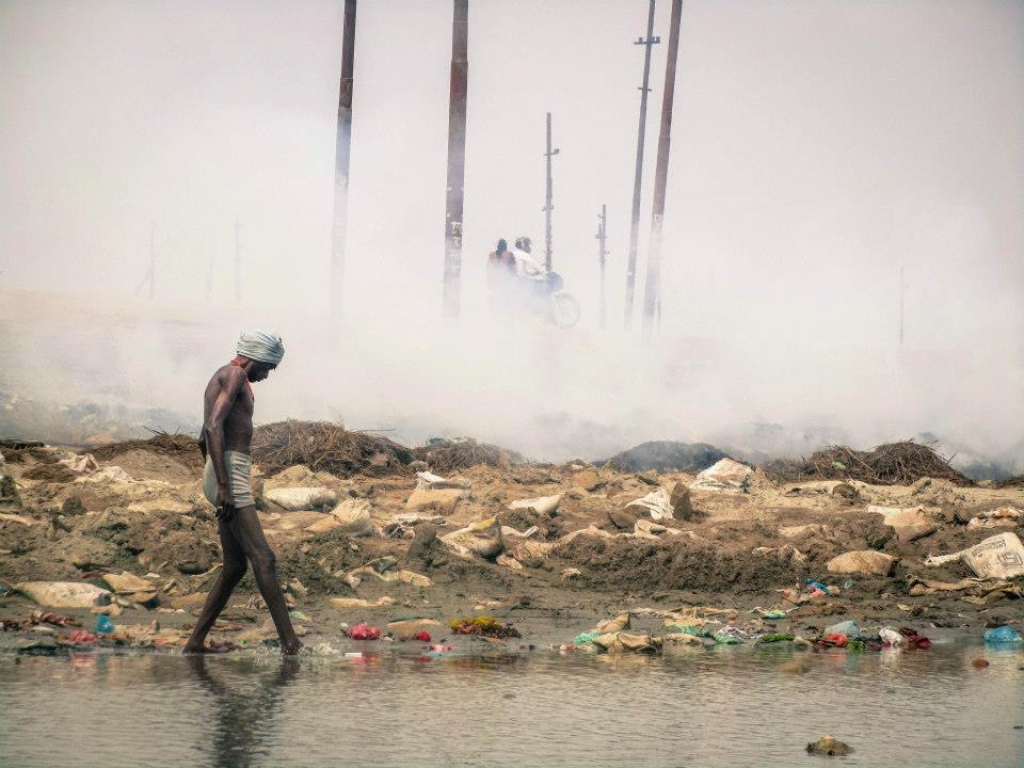 "Precariously poised between excitement and horror", is how I described my feelings six years ago on the eve of the inaugural bath at the Maha Kumbh in Allahabad. Not much has changed (except the name of Allahabad), perhaps a little more horror than excitement this time around.

I grew up in the ephemeral holy city of Hinduism and my parents still continue to live there. My mother messaged me yesterday that this is the best Kumbh ever: venue is super clean, water in the rivers is so clean that one can spot fishes swimming in it and there are WiFi hotspots at every corner. I have tried explaining to her that my issue is not with the organisational management during two months of festivities but mismanagement of environment and its aftermath. But I fail to sail through her and her ilk’s willing suspension of disbelief.

It took an international outcry after dystopic photographs of the Triveni Sangam post-festivities hit the internet for the state machinery to start a clean-up exercise. Bombay high court had to intervene to ensure there was a clean-up after the 2015 Nashik Kumbh.

Things were far from perfect during the festivities as well if one reads the Comptroller and Auditor General (CAG) of India’s audit report of the event: “Audit observed that no effective planning for protection of environment and pollution control was made for the Maha Kumbh Mela.”

More than 25,000 tonne solid waste generated during the festival went unmanaged and was found choking the river and city drains. In 2013, 33,903 temporary toilets constructed were connected to temporary pits for collection and storage of faecal sludge. The CAG found that these pits lacked any mechanism to stop leaching of contaminants into groundwater, further polluting the city’s domestic water supply (over two-third of the city is dependent on groundwater for their daily water needs).

It also noted that the quality of water in the rivers during the festival was not suitable for bathing. The maximum permissible Biochemical Oxygen Demand (BOD) for safe bathing is 3.0 mg/litre but it ranged between 3.4 and 8.5 mg/litre among the various bathing spots during the event.  Meanwhile bacterial colifrom ranged between 3,300 and 39,000 MPN/ 100 ml while the permissible limit is 500 MNP/ 100 ml for bathing.

Allahabad regularly features among the cities with worst air quality in the country, but CAG reports no measures were taken to control air pollution during the event. In fact, only three air quality measurement points were put in place and none of them were in the mela grounds. CAG notes that no measurements were taken on the main bathing days and on rest of the days air quality was at least four times worse than the permissible limit. The city still doesn’t have a real-time air quality monitor.

This Kumbh is more of a political grandstanding of the current Bharatiya Janata Party (BJP) governments at the state and the Centre than the actual religious outpouring of pilgrims that the UNESCO recognised as the Intangible Cultural Heritage of Humanity. The real Kumbh is scheduled for 2025 and this year marks only the middle of the 12-year cycle.

Part of the grandstanding is mega-advertising of the event to get more people to attend a naturally dense gathering. It also serves as showcase for the government’s flagship missions such as Swachh Bharat. An open-defecation-free Kumbh is the call. More than hundred thousand toilets have been deployed. These are supposedly complemented by modern techniques for septage management. Solid waste is to be collected in 20,000 dustbins that are to be deployed and will be transported out of the Mela area by tippers and compactors deployed accordingly. But no information is available in the public domain as to how the waste generated would be disposed.

The Swachh Kumbh Champ Campaign, which aims to mobilise people to come out and get directly involved with cleanliness efforts in their day-to-day life and in their immediate surrounding, has been running since October 15, 2018. It is officially scheduled to end on March 4, 2019. Much like 2013, no plan seems to be in place for clean-up after sages and shutterbugs fly away.

Propping up of a complete city with a multi-million population, albeit temporary, needs to have a proper environmental impact assessment and a management plan in place; especially if it is being built on highly ecologically sensitive area, like a river bed and its immediate floodplains. I could not locate any such plans even this time.

There is a legal requirement for an environmental clearance for any township bigger than 50 hectors in area. The tent city of Kumbh is way bigger.

For reference, the damage in three days of festivities conducted by Art of Living on Delhi’s Yamuna floodplain in 2016 will need nearly a decade to be reversed, estimated an expert committee of the Union Ministry of Water Resources, River Development and Ganga Rejuvination.  The Triveni floodplain is no different than the Yamuna floodplain but lacks the activist voices found in abundance at the national Capital.

It is high time to start investing and investigating ecological cost of holding the Kumbh on burial grounds of what used to be one of the mightiest rivers on earth. Current technology and political will is able to put up a show for the uninitiated to the reality of Ganga and Yamuna, with water being artificially pumped up to make rivers look like rivers.

The question that haunts me today is whether I’ll get a message from my mother during the summer, proclaiming she can still see fishes swimming in the holy rivers.

PS: The author insists on referring the city by its original name Allahabad, even though the government has recently renamed it Prayagraj. For him Prayagraj remains the name of the most popular train that connects New Delhi to his hometown.