Time has come for tribal medication to be revalidated 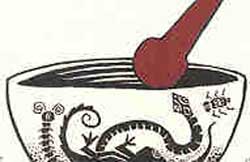 THE practice of tribal or generic medicines is a school with a difference. The practitioners are still found among the Irula tribals of Attapadi near Pallakkad in Kerala. Recently at a camp organised by the Prakrithi Sastra Vijnana Kendram at Nadavardmpu near Irinjalakudda, more than 2,000 people were given tribal medication for diabetes, asthma and chronic headache.

Traditional medications are, in fact, now becoming popular in the face of the government's irrational drug policy which is turning India into a dumping ground for many banned drugs like Baralgan, Buscopan, Oxalgin, Novalgin, Suganril) Butalgin, Viaform and Utragin that are still manu -factured and sold over-the-counter in India. It is a proven fact that very large Ultragin (an analgin-based antipyretic) doses lead to a fatal condition known as Thrombocytopenic purpura a bone marrow disease.

Recent ethno -zoological surveys are documenting the medicinal uses, of a diverse range of plant as well as animal species. The Charaka Samhita lists references to nearly 200 animals. Smoke from burning owl feathers, nails and skin is, said to soothe the insomniac, while owl meat is 'used to treat tuberculosis (TB). For TB patients, meat of cat, mongoose and jackal (in the guise of rabbit), snake (disguised as eel), and crow (as partridge), is considered beneficial. A more exotic suggestion by the Samhita is that lion, bear and tiger meat (disguised as venison) is also highly potent. The Samhita also holds goat meat in high esteem. Fresh goat blood is prescribed to treat excessive blood loss.

Ethno-zoology essentially deals with the inter-relationship between humans and -animals, especially the medicinal applications of animals. The Zoological Survey of India undertook a study of tribal medicines, and carried out the first ethnological survey in Madhya Pradesh which has the largest tribal population in India ( 11,987,03 1, out of a total tribal population of 52,178,844).

Thus, of the 894 , medicinal applications, the maximum number were from parts of mammals (433), followed by birds (136) and reptiles (107). The most popularly used single derivative is cow's urine having 37 applications in a variety of diseases like coughs, colds, fever, jaundice, appendicitis, stomach disorders, TB, urinary complaints (consumed internally), deafness, eye trouble, skin diseases, septicaemia and varieties of pain (external application). It is also used for rejuvenation and blood purification. The hen's egg also has 37 applications, including increasing libido in males, abortion and preventing pregnancy. Among insect products, honey is most useful.

The survey found that calcium-rich animal parts are useful in treating ear troubles, that earthworms increase lactation, goat liver cures night blindness, pigeon blood alleviates rheumatism and that human urine serves as an antiseptic. Surveying 35 tribes of Madhya Pradesh, the study listed 107 medicinal applications from body parts of reptiles: 28 from the monitor lizard, 10 each from the garden and the spiny-tailed lizard, four from the crocodile and eight from the snake. The tortoise and turtle accounted for the maximum (47).

Once the findings are properly researched, documented and confirmed, a radically different pharmacology may emerge altogether. The 1978 World Health Organization meet had declared that to achieve "health for all by 2000, there is an urgent need for strengthening traditional medical systems...", and that ethno-zoological medicine is more relevant today and needs to be recognised, and that the role of its practitioners is as relevant today as the village primary health centre.