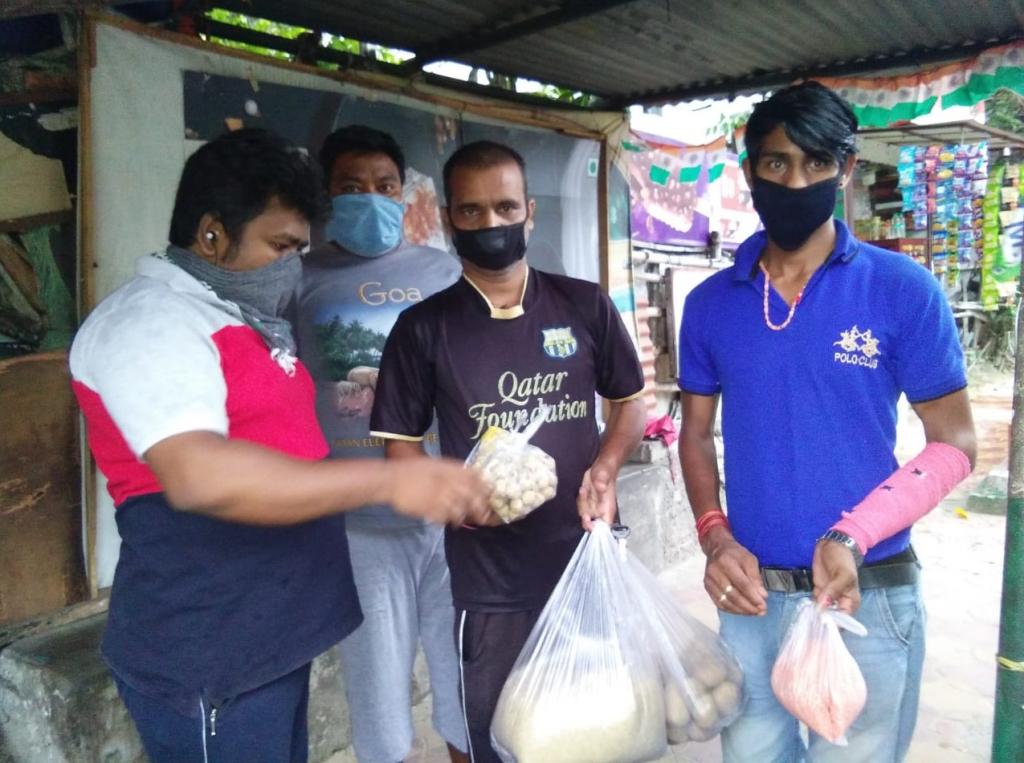 Migrants in West Bengal are managing food mostly with the help of non-profits. Photo: Padma Bareddy

The gap between the promises made to migrant workers and the reality they suffer on the ground changes from state to state. In West Bengal, it seems hopelessly wide, and the state seems to be making few attempts to bridge it.

We have been hearing the consequences, as migrants on the ground call volunteers of the Stranded Workers Action Network (SWAN), seeking help from strangers when the government has failed them.

A few days after the COVID-19 lockdown was instituted, a cover of five kilograms of grains and one kg of pulses was announced to be distributed free under the Public Distribution Scheme for the next three months, under the Pradhan Mantri Garib Kalyan Yojana.

Had it reached stranded workers it could have saved many from the brink of starvation. In West Bengal, those who need it most, have struggled for days, and it has been nowhere to be found.

Thirty-five days into the lockdown, Farhan called us from Kolkata.

“Madam, we are left with ration for only two days now. I have a child, a one-year-old daughter. Please help me. Till now, we have not received any ration. Outside, there is some khichudi (gruel of rice and lentils), but the queues there are very long, and I am scared. If something happens to me, who will support my family? How will they get food? If it is possible, please give us ration,” he pleaded.

Initially, Farhan had got some money from his employer and managed to buy food with that. But that money was long gone.

By the time he called SWAN, he had Rs 470 and only two days of ration left. We tried to get him help through the local authorities, but nobody answered.

We couldn’t find a way to get his government rations to him. So, SWAN transferred Rs 2,000 to his bank account to cover his immediate needs.

As local authorities have failed to extend any kind of support, SWAN has provided cash assistance twice again, along with ration support from organisations on the ground. While Farhan is able to get by with this assistance, can we say the same for the countless others with no external support?

Few workers we have talked to have been able to get rations. Of the 293 migrants who reached out to us from Kolkata and the rest of West Bengal, 82 per cent said they had not received rations from the government.

Only seven per cent told us they had managed to get rations (we have no data for the rest). And even when migrants do get rations, it is far below the required amount.

Chhotu, a migrant from Jharkhand, staying in Girish Park, Kolkata, went to the local councillor for help. He received only a kilogram of rice.

In place of their promised ration, workers in Kolkata have sometimes been offered cooked food.

But even in places where that is available, the long queues, the shorter shelf-life of the food and the downright monotony of khichudi, keeps many searching for dry rations.

Where the government has left a gap, local organisations have struggled to fill it.

Pratip Nag, who has been working on the ground in Kolkata, puts it starkly:

“[There is] no support for migrants in terms of providing ration, except for a few areas in the form of cooked meals. It is only non-profits, mass organisations and a few people who are working on the ground with food or ration support.”

And migrants have little choice to escape home. Chotu and Suresh called us, looking for help getting back to their homes in neighbouring Jharkhand.

They tried to register for a pass on the link provided by the West Bengal government. But we soon realised that the pass was designed only for those with their own private transport.

For two weeks, we tried getting through to the helpline, but got no response. Chotu and Suresh have been remarkably resourceful and they managed to hire their own private vehicle. Somehow, they managed to fulfil the capricious requirements of a form gone wrong and got home.

Few other migrant workers have been so lucky. On May 29, we could reach the helpline 033-22143625 after around three weeks of trying, only to get the information that individuals needed to register themselves on the Whatsapp number 8017845555 for state-supported travel in and out of the state.

West Bengal seems to have entered election mode — though the assembly polls are due only next year. Distress, as usual, has also been politicised.

While allegations and counter allegations between the Trinamool Congress and the Bharatiya Janata Party have been making headlines, the ground situation keeps deteriorating. First, the virus and then the cyclone have exposed an already fragile political and administrative system in the state which has failed to respond to the situation.

The West Bengal government has largely failed to get the promised help to stranded migrants and has put up almost insurmountable obstacles to their returning home. This can change.

On May 15, 2020, the central government allocated five kg of food grain to stranded workers.

A notification (F.no.7-1/2019-BP.III(pt)(ii)) issued on May 15, 2020, allocated food grains to migrants, at the rate of five kg per person per month for two months, free of cost as a part of economic measures, namely Atma Nirbhar Bharat.

However, there is no provision for anything in the notification but rice and wheat. Fifty days into the lockdown, this is too late for many.

And in any case, it is just another promise and unless the state governments manage to act immediately, it will only widen the gap between promises and the actual problems suffered by the migrants.

Even after three weeks of this notification, people like Farhan have not received any ration support from the state and are still relying on the support of local organisations for ration or SWAN for cash assistance.

We ask the government of West Bengal to double the quantity of ration, add in other essentials and ensure that it reaches both, stranded workers and those returning to West Bengal from other states.

We further ask for a cash transfer of Rs 7,000 per month to each poor household. This is needed for medicine, emergency situations and other essentials.

The West Bengal government cannot afford laxity of governance any longer. They must go beyond the mere promises of the Centre and render actual help to the state’s people.

The migrant workers have a right to nothing less. The National Human Rights Commission states it plainly:

“The Right to Food implies the right to food at appropriate nutritional levels and the quantum of relief to those in distress must meet those levels in order to ensure that this right is actually secured and does not remain a theoretical concept”.

Notifications from the Centre cannot give Chotu, Suresh, Farhan and their co-workers the support they need. Ultimately, only the officers of the government of West Bengal working together can achieve that.

Padma Bareddy is a development professional working at Anode Governance Lab, Bengaluru and a volunteer with the Stranded Workers Action Network (SWAN)