Forest rights in Jharkhand: Too early to rejoice

Forest rights recognised in Jharkhand for the first time in 2 years, but do not give management rights 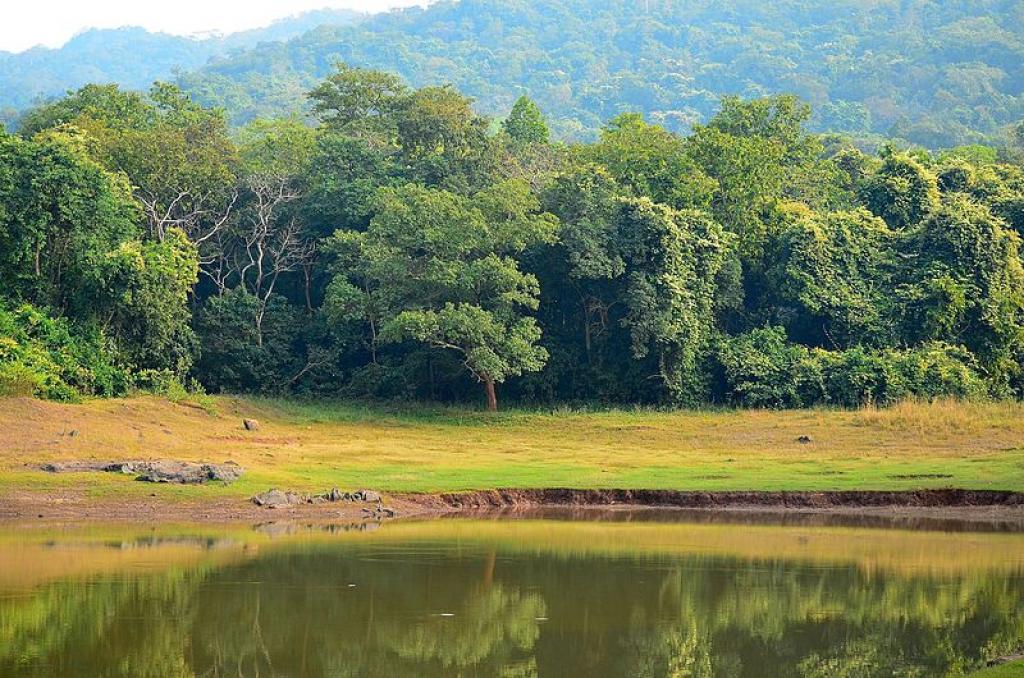 Jharkhand Chief Minister Hemant Soren this Republic Day distributed titles to 800 villages for community forest rights under the Scheduled Tribes and Other Traditional Forest Dwellers (Recognition of Forest Rights) Act, 2006. The move is welcome, but it is too soon to celebrate.

Thirteen tribal villages in Godda district’s Sundarpahari block were among those selected. Some 12 more are expected to get CFR soon.

The titles distributed under the Scheduled Tribes and Other Traditional Forest Dwellers (Recognition of Forest Rights) Act, 2006 (FRA), by the Soren government is a welcome step. But it is too soon to celebrate.

Without management rights, the Gram Sabha’s role is limited to a beneficiary who can reap the benefits of nature’s bounty but cannot be an active participant in its conservation and development.

Jharkhand is one of the many states in India that have lagged in the implementation of FRA, 2006. As of December 31, 2020, the percentage of both IFR and CFR rights recognition in the state was at 56 per cent.

These figures, however, do not mean much when seen in isolation. It is only when the status quo is compared with potential of rights recognition in the state that we start to get an accurate understanding of the real progress of the act.

The minimum potential of CFR to transform Jharkhand is around 21,175 square kilometres / 52.32 lakh acres, according to a recent GIS-based research study by ATREE (Lele, Khare, & Mokashi, 2020).

Other studies (CFR-LA, 2016) also corroborate (CFR potential of 51.58 lakh acres) with the recent estimation. These rights could potentially be claimed by 12,516 villages out of the total 32,395 villages in Jharkhand.

Latest data from the Union ministry of tribal affairs (MoTA) showed that around 2.57 lakh acres have been distributed as part of these entitlements out of which CFR area is 1.03 lakh acres. This means in the last 12 years, since the landmark law was passed, CFR recognition in the state has been a mere two per cent of its true potential.

While the ATREE study did not speak of IFR recognition status, it is also equally dismal as pointed out by a national study (Sahoo & Sahu, 2019), which peged the overall percentage of potential forest area recognised at 3.87 per cent. 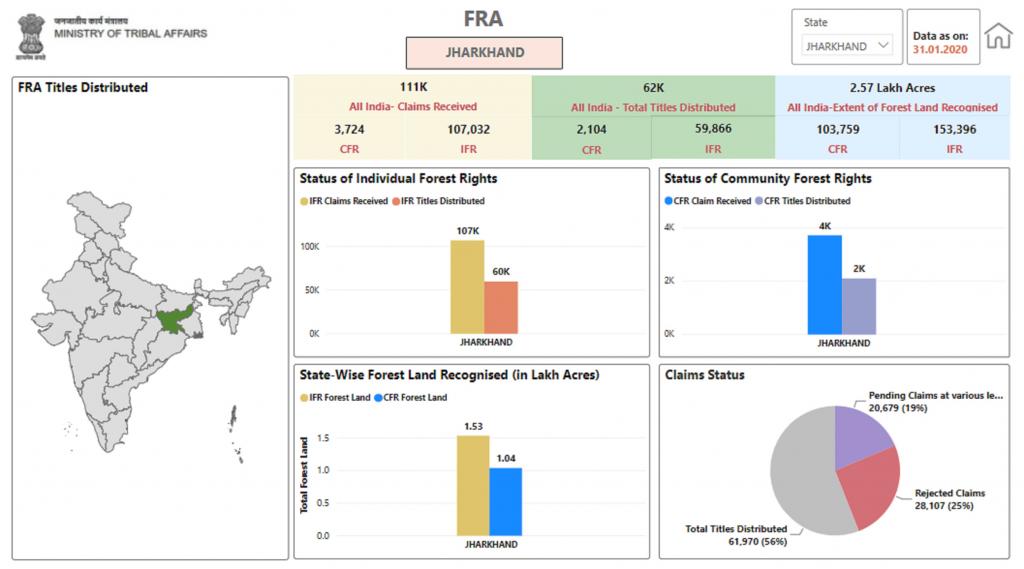 With the change in the state government in December 2019, it was expected that land and forest rights issues will take centrestage once again. After all, land and forest issues played a crucial role in the electoral victory of Hemant Soren, who had campaigned on protecting tribal rights.

The novel coronavirus disease (COVID-19), however, shifted the focus to on health and migration till the end of the year. A year on, glimpses of keeping the electoral promises are now finally visible. Oxfam India started creating awareness about the landmark act in in the state in 2012, which later progressed to training and capacity building of grassroots non-profits till 2015-16.

The remaining 12 villages are also expected to receive their titles soon. Oxfam and Badlao are helping 15 more villages to file CFR claims, which have progressed to the Forest Rights Committee.

The Jharkhand government should take a cue from neighbouring Chhattisgarh, which has started providing CFR rights in campaign mode. It has also allocated separate funds in its 2021 budget for all Gram Sabhas that have secured CFR rights.

This will not only help create robust CFR management plans, but also galvanise convergence with government schemes.

Jharkhand can also emulate another neighbouring state Odisha to catalyse the rights recognition process in the state.

Tribal Research Institute (TRI) Odisha has come out with an FRA atlas: It offers a baseline for informing implementation, planning and setting targets for district-wise rights recognition.

The state can now move one step forward and do further analysis for a village-wise status of FRA claim and recognition as well as a district factsheet. This would be useful because it is ultimately the Gram Sabhas that receive the entitlements.

This will also help fix accountability with the forest division and nodal agency for implementation. 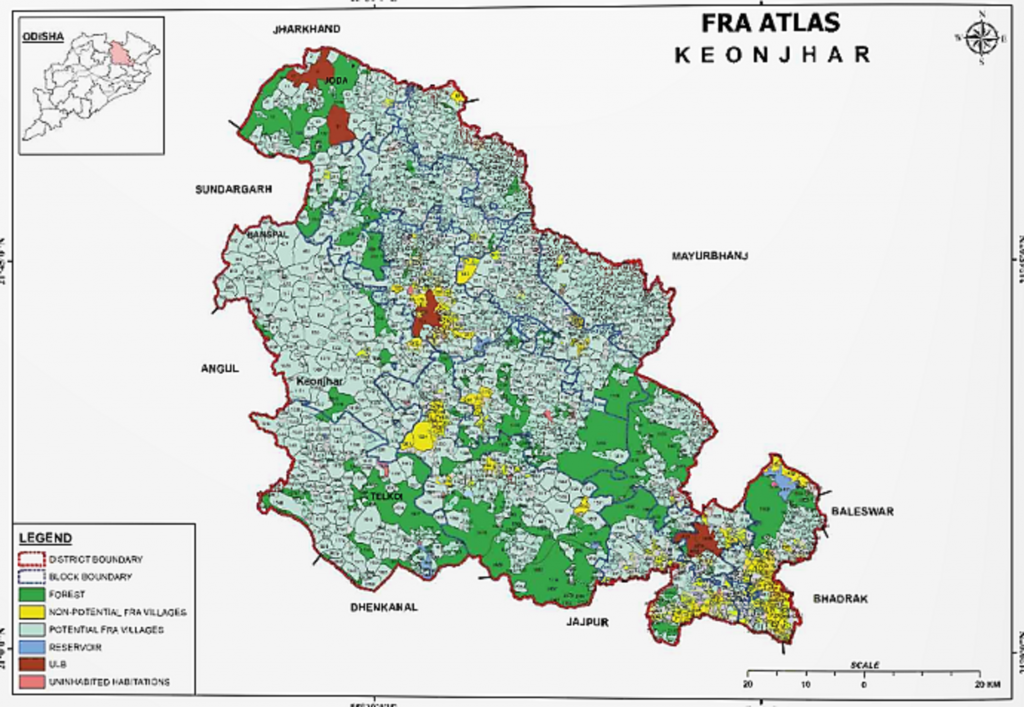 The fact that Jharkhand does not have a tribal affairs ministry of its own is telling. The roadblocks that hinder full-fledged FRA implementation are well known by now. The civil society forum and Jharkhand Van Adhikar Manch have identified some of these:

These are some of the many operational issues that need to be streamlined soon. It is of utmost importance that a strong interface is established between forest and revenue departments, district-level committees, sub-district level committees and Gram Sabhas to review proceedings. This will do away with the current piecemeal approach adopted across the state.

Recognising forest rights is just half the task done. Rights are only a notional win if these cannot be exercised to enhance forest conservation and enhance lives and livelihoods of title holders.

It is imperative that the state also makes preparations and invest its resources for post-recognition convergence with line departments such as irrigation, agriculture, horticulture, forest department, MGNREGA among others.

The few studies that are available indicate that performance in this crucial aspect has been poor.

The ruling dispensation should endeavour to develop an Integrated Convergence Model in diverse areas of forest governance rights and propose state action plan fir sustainable livelihood opportunities among these communities at state and district level.

The issues of land, water and forests are central to Jharkhand’s tribal community, not only for preserving their livelihood but also for maintaining their socio-cultural identity. Now that there is political will in the state and a tribal chief minister who also happens to be the forest minister, it is imperative that the FRA movement is kick-started in a mission mode so that the ‘historical injustice’ can be ‘undone’ in a time-bound and systematic manner.