Getting a city into shape

Many years ago, weather used to be the icebreaker in conversations in Bengaluru. Traffic and its interminable snarls is the only subject every Bengalurean or visitor to the city talks of now. There are 3.5 million vehicles in the city. Its roads can support no more than one million. Traffic jams are the rule.

Water shortage has become grim. People are beginning to accept power shutdowns of over 20 hours a week. Waste piles up in every busy city corner. Pollution and high pollen content in the air has reached massive proportions. Seventy per cent of all ailments in the city are respiratory.

The bjp made two brave promises in its election manifesto last year. One was the sprucing up of infrastructure in Bengaluru with "money being no restriction". The second was the repeal of the Karnataka Land Reforms Act, one of the most regressive legislations and a serious anachronism in current times: buying land in Karnataka is the most difficult in India after Kashmir.

So, many people in the city were happy when the abid (Agenda for Bengaluru Infrastructure and Development) task force was set up. While there are political compulsions, the issues before the task force--like all initiatives on infrastructure--pertain to energy, water and waste management. They deal with public spaces, parks and city landscapes. Of course, public transport should be on top of all minds.

But there is an irony. Even if the government shows resolve, the results will not show before six years by which time this party might not be in power. But these are the pangs of a growing democracy. So can the government take that risk? 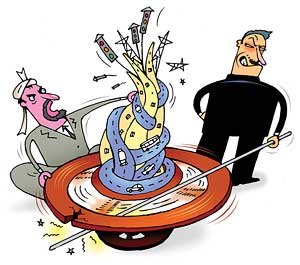 There are, however, many areas where political risks are less. Consider, for example, the highrises in Bengaluru. The city has seen a phenomenal rise in residential and commercial buildings over the last decade. What we have not seen is a matching concern for supply of water and energy to their occupants. Management of waste--that such growth inevitably leads to--has also been brushed under the carpet.

It's not that solutions are difficult. For example, energy used by air-conditioning systems can be reduced by as much as 50 per cent. And then there are systems to treat kitchen and degradable wastes: 60 per cent of all the waste in India is wet, and therefore can be converted to compost. All this, right where you are, with no dependence on state infrastructure.


One does not need much political intervention here. The impact on the city will be massive if local solutions are promoted well. Studies show it is possible to reduce Bengaluru's energy demand, in fact that of most big cities in India, by making greater use of natural light and ventilation. Bengaluru's annual electricity consumption can go down by 500-600 MW--about 12 per cent of the entire energy demand of Karnataka.

Look at it another way: Every MW avoided, saves up to Rs 10,000 crore. The government would have done well if it spent only a quarter of this money on campaigns for awareness and on promoting entrepreneurs who offer solutions at the local level. Planning authorities must hasten clearances for companies and buildings that do not depend on the grid.

The city corporation and the state government must also devolve responsibilities of infrastructure services to communities, shop-owners and even builders. They can cartelize to produce energy for their own needs and for individual homes.