Invest in the most vulnerable to tide over COVID-19 crisis 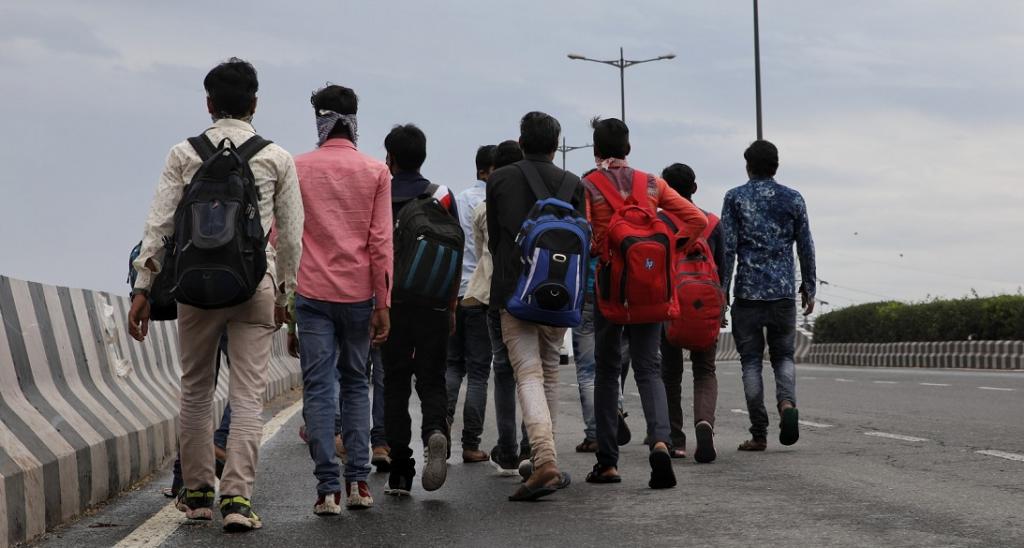 Many migrant workers have still not received proper care or attention and are stranded in various cities of India. Photo: Vikas Choudhary / CSE

On May 12, 2020, the Prime Minister of India hinted at a Rs 20 lakh crore stimulus package meant to help the people tide through the disastrous economic crisis brought in by COVID-19. He said this package would give rise to an atmanirbhar bharat, or self-reliant India.

India, as defined by our Constitution, is all about ‘we the people’.  There was one segment of these people, the Indians who were walking on the streets — for hundreds and thousands of kilometres — to reach their homes by any means, who had already taken this message seriously from day one of the lockdown, long before the prime minister asked them to be self-reliant.  They had been left to their fates by the country.

The owners of the factories, farms, construction companies and other such establishment shunned their workers as soon as the government announced the lockdown. The city dwellers, whose dreams these workers had come to fulfil, looked away instantly.

These workers have always remained an invisible force. Even now, they are invisible despite being visible in hundreds and thousands on the streets.  Scenes from the streets reinforce the impression that they are a part of the ‘we the people’ only on the day of voting.

On other days, they are second- or third-class citizens of this country. Or maybe, they are not citizens at all. Slaves at the mercy of the lords who pay them as long as they are capable of serving them.

That’s the reason, when the government declared a lockdown and decided to implement it within a few hours, these people were stranded with no one taking care of their food, shelter and well-being. They were left to the mercy of the charity workers.

The government certainly had no plans for these workers when the lockdown was announced. Government directions evolved gradually to tackle the problems that emanated from the lockdown but the workers remained in trouble.

Finally, a Rs 20 lakh crore package was announced, but it hardly had any succour in store for them. The only relief, a few kilograms of ration for two months and an additional work promised under the Mahatma Gandhi National Rural Employment Guarantee Scheme (MNREGS) is too little too late.

Many are still on the roads and state governments are struggling to handle this unprecedented crisis. In fact, the way these people have been travelling on their own, walking, cycling, taking on to railway tracks, loading themselves on truck and tractor trollies like paddy bags are transported, has made the lockdown meaningless. States worry as positive cases soar with their arrival. Ironically, India has eased lockdown rules as the positive cases soar.

Coming back to the stimulus, in the name of making India self-reliant, the government has decided to open up land, forests, rivers, minerals, airports and public sector undertakings to private companies and the rich under the business-as-usual approach.

Such an approach argues that supporting the rich with economic stimulus, subsidies and facilities would create more jobs and lift up the economy. We know governments normally don’t learn from mistakes. However, in this case, the evidence of a collapsing economy is right in front of us.

The failure of the private companies in securing the livelihoods of their own workers, even for a day, shows that they are incapable of doing what is being expected of them. They can’t make the country self-reliant.

They only care for their own profit. That’s the reason many of them have got money to donate to the PMCARES fund but have shunned their workers. They want to stay in business and garner the stimulus by pleasing the government.

Now they want their workers back even as they don’t care to see if these workers have already reached their homes or not. There’s no word of sympathy, let alone showing an intent to increase the pay and ensuring job security if such kind of disasters occur in future. I don’t want to generalise. There are exceptions. Exceptions don’t make the rule.

In the meanwhile the government has provided another booster dose to the insensitive and apathetic employers.  It has repealed an earlier order (of March 29, 2020) that had talked about compulsory wage payment to workers during the lockdown.

The workers walking on their own, dependent on donated food on the road, have no job security whatsoever. They are paid as long as they are capable of working. It means the real loss of the economic slump has been borne by these workers.

But they are left to fend for themselves even as the rich get all the benefits from the so-called stimulus. This has to change. India needs to invest the most in its most vulnerable people to not only tide through the current crisis but to be a country that achieves progress that’s equitable in the true spirit of its Constitution.

Ranjan Panda of Water Initiative Odisha, is a researcher, environmentalist and activist. Views expressed are the author’s own and don't necessarily reflect those of Down To Earth