How India is getting gas and coal policy wrong 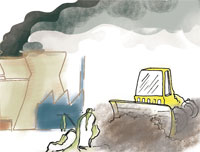 Two monopolies. One private and the other public; one in gas and one in coal. Both equally disastrous for the environment. I speak here of Reliance Industries Ltd and Coal India Ltd.

We know that air pollution in Indian cities is hazardous. We need urgent solutions to cut emissions from all sources so that we do not lose this critical health battle. In Delhi and its surrounding region, for instance, we know that air toxins are a clear and present danger. The tiny particles of PM 2.5 that can go deep into lungs and cause serous health impairment are several times higher than standards during winters. In addition, nitrogen oxide (NOx) levels are rising because of the burning of diesel and coal. A new danger is lurking: ozone, a deadly pollutant, which targets lungs and is linked to high NOx emissions.

We need to find urgent solutions. We know that one big part of the solution is to reinvent mobility and to phase out diesel use in vehicles. Another part of the solution is to phase out coal use in thermal power stations in densely polluted areas and to run them on relatively cleaner natural gas. Gas-based power stations have no particulate emissions and much lower NOx emissions. They can achieve 20 ppm NOx levels where coal-based power stations have no standards but emit between 100 ppm and 300 ppm. Coal-based power plants are regulated based on their stack height—the assumption is that the higher the dispersion of pollutants, the lesser the problem. But this worked when there was cleaner air for dilution. It does not work now. So the transition done in the case of vehicles to compressed natural gas (CNG), which helped the city leapfrog to cleaner air, is needed in power plants as well.

This has been accepted. So, for the past few years, Delhi and its surrounding region have invested in building gas-based power plants. Delhi has shut down its coal-based IP power plant and is waiting to close the Rajghat power station. It has built Pragati, Bawana and Rithala plants. The combined installed capacity of these gas-based power plants is over 1,730 MW. In addition, the city is ready to invest in a plant of 700 MW at Bamnoli and to convert three units of the Badarpur power plant to gas.

But there is a small hitch. There is no gas to run these commissioned plants. The country, they say, has run out of gas. Oops! This is exactly what was said over a decade ago when demand was raised for natural gas to run vehicles. Then, gas became available; there was talk about huge finds in the Krishna-Godavari basin. But now the wells have mysteriously dried up, gone kaput.

Or so it is said. According to the Ministry of Petroleum and Natural Gas (MoPNG), India’s gas output is expected to fall by a whopping 35 per cent in this fiscal and another 12 per cent next year. Nobody cares to explain this. But it is clear that the new monopoly player—Reliance Industries—is not playing ball. The Comptroller and Auditor General of India’s (CAG’s) report on hydrocarbon production sharing contracts has a damning indictment of the loss to the exchequer in the allotment of the gas field and of the manner in which the capital costs have been rigged to reduce the sharing with government. The widely held belief is that exploration is down and gas is drying up because Reliance Industries wants prices to be hiked. It wants control over the sale and allocation of gas. Its partner in this is oil major BP, which picked up 30 per cent stake in it for US $7.2 billion. Clearly, this investment would not have been made if the fields were dud.

In coal the story is same and different. It is said that thermal power plants are running out of coal because environment and forest clearances are holding up projects. So there is a clamour to open up more forests to private players. The leaked draft report of CAG on allocation of coal blocks reveals dirty secrets. What is worse is that Coal India, which produces 90 per cent of India’s black gold, has under its control some 200,000 hectares (ha) of mine lease area, including 55,000 ha of forest land. Still it produces only about 500 million tonnes annually. So it is convenient for all to not fix this supply problem, but ask for even more forests to be mined.

The environment is hurt in both ways—by the unavailability of natural gas, which would have cleaned up emissions; and by the demand to destroy more forests, surrounding water bodies and livelihoods of people, because of our inability to use the existing coal fields optimally.

The issue also hides the serious problem of pricing power at affordable levels, given the rising price of coal and gas. Currently, imported and re-liquified gas price is touching US $17-18 mmscd. Imported coal price has also spiralled out of control. In this scenario, the options are as follows: one, to maximise domestic resources and operate them at tight capital and operational costs; and two, pay for higher raw material costs in power generation by investing in reducing inefficiencies, including losses in transmission. As yet, there is little evidence that we are moving in any of these directions. The only evidence is that the big monopolies are taking us for a ride with disastrous consequences for our health and environment.