How to rewrite the Durban script 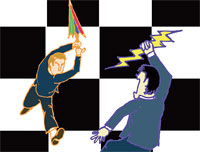 It’s that time of the year again. Climate change talks are heating up, with the next conference of parties scheduled in Durban in end-November. There is heat but no light. The negotiations are stuck despite the clear signs of climate change: dangerous and potentially catastrophic extreme weather events.

Not much is expected in Durban, except the usual shadow-boxing. The European Union is leading the pack of climate champions. It wants the world to fast track negotiations for a single, legally binding treaty on cutting emissions. It does not say (loudly) that its real plan is to junk the Kyoto Protocol, which demands that industrialised countries cut emissions marginally, roughly 6 per cent below the 1990 levels by 2008-2012. The agreement in this Protocol is that rich countries, major historical and current emitters, go first, creating ecological and economic space for the developing world to grow. In time, the rest would follow. To facilitate actions in the developing and emerging world, technology and funds would be committed. All this done well would lead to a real deal. But it was not to be.

The US and its allies walked out of the Kyoto Protocol and now EU wants to dump it as well. It finds it difficult to meet its commitments to reduce emissions domestically.

At Durban, once again the stage is set for a dud act. EU will advocate climate action and its proposal for a single, legally binding treaty will get predictable responses. The US, the world’s biggest climate renegade, which pulls all strings, will oppose the proposal. Its objective is to do little at home, but most importantly, not to be made responsible for taking action based on contribution to the problem. It wants the distinction between the past and present polluters to be removed. It wants no discussion on a legal instrument. The other big polluting guns—Australia, Japan, New Zealand and Canada—will stand behind the US.

In the Durban-script the roles for the rest of the actors have also been written. The Association of Small Island States (AOSIS), which is rightfully angry over inaction, will go with the EU-designed approach. It will see no choice but to back EU’s proposal, even as it knows the stalemate will only prolong. On the other hand, China and India will side with the US and join the deniers. The rest, with small differences, will wait for the game to play out.

The host, South Africa, will want a deal in its city. What will this be? This country more than any other reflects the climate dilemma: to act or not to act? It has very high per capita emissions—almost equal to Europe’s —but it is yet to share economic benefits and energy access with its majority poor. It is dependent on coal mining and exports, which it cannot jeopardise. But it wants to play the gracious host and somehow get its basic friends—the coalition of the emerging polluters, Brazil, India and China—to dine the last supper. Brazil may play along; it hosts the next big environment summit and would want to look good. But China and India will know too much is at stake. Once they accept a single instrument, they will have to take costly action, with no resources.

The die is not even cast. But the end game is known.

So what can change the outcome? I believe there is no other way but that the developing world regroups and takes leadership. Our world is the worst hit. We do not need to be preached about the pain of climate change. We know it. This leadership will require making tough demands. It will mean demanding drastic emission reduction targets for the rich world. But it is equally important that our world does not hide behind the intransigence of the US. Our world must explain that it is already doing much to reduce emission intensity of its growth—growth of renewables in China, reduction of deforestation in Brazil and energy efficiency in India. It can and will do more. However, the high costs of transition to low-carbon growth must be paid for. This leadership must be firm on principles of climate justice and effective action.

This approach, I know, will be scoffed at and derided as being impractical. It is partly because the non-governmental groups following climate negotiations mirror the divide in the world. One half, the followers of the US and its grouping, will say this stance will jeopardise their democratic government and bring back the dreaded Republicans—Neanderthals who do not believe climate change is real. The other group, followers of EU and its grouping, will say this is good in words, but will not lead to effective action. In Durban they will want a deal, at whatever costs.

But their hedging will hide the one truth that needs to be revealed: most of the low-hanging fruit—easy options to reduce emissions—have already been picked in the climate-threatened world. This fact cannot be more inconvenient coming at a time when the rich world is faced with a double-digit recession; the euro-zone is threatened; and people are worked up against austerity measures.

The Durban deal (like its predecessors Copenhagen and Cancun) will be bad for all if not based on accepting the hard truths of climate change. It is time we grew up.