In the past 10 years, India’s environmental movement has had a rebirth. It was first born in the 1970s, when the industrialised world was seeing the impact of growth on its environment. In that decade the air and rivers of London, Tokyo and New York were full of toxins. The world was learning the pain of pollution. The first major global conference on the environment, the Stockholm meet, was held to find ways to deal with this growing scourge. India’s key pieces of environmental legislation were enacted in this period—the water pollution Act of 1974 and the air pollution Act of 1981. But we were innocents in the world of pollution. We had not yet witnessed the intensification of growth that would, in turn, destroy our environment. 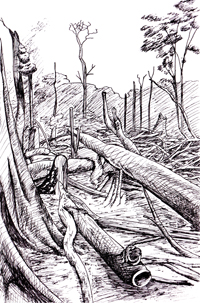 It was also in the 1970s that the second environmental challenge—issues of access and sustainable management of natural resources—emerged. In the remote Himalayas, the women had prevented the timber merchants from cutting their forest. But their fight was not to protect the forest. Their fight was to assert their right to the resources of the forest. It was an environmental movement because the women of this village in Chamoli district of Uttarakhand knew they had to protect the forest to protect their livelihood. It was a call to redefine development and growth.

But it is only now that these two sides of the environmental challenge have truly come home to India. Importantly, this is a time when environmental issues have taken centre stage in the country. Yet matters are going from bad to worse. The pollution in our rivers is worse today than it was three decades ago. The garbage in cities is growing by the day, even as governments scramble to find ways of reducing plastic and hiding the rest in landfills in far-off places. Air pollution in cities is worse, and toxins are damaging our lungs.

This, in spite of efforts to contain the problem. We have invested in building sewage treatment plants to deal with water pollution. We have improved the quality of fuel that runs our vehicles; changed emission standards and set up institutions to regulate industrial emissions. But still we find we cannot catch up in this game of growth and its toxic fallout.

In this decade as well, the struggles for the control over resources have intensified. In every nook and corner of the country where land is acquired, or water sourced for industry, people are fighting even to death. There are a million pollution mutinies happening. The fact is in India a large number of people—and it is indeed a large number—depend on the land, the forests and the water around them for their livelihood. They know that once these resources are gone or degraded their survival will be at stake.

We must recognise that across the world, the environmental movement is based on the idea that people do not want anything bad in their vicinity: not in my backyard or NIMBY. Ordinary people, but with power because they are part of the voting middle-class, take up these issues because they affect their lives. The fight is personal. It is another matter that their fight has national policy ramifications, often for the better. But there is also a downside to NIMBY: if it is not in my backyard, then in whose backyard should it be? This is not an issue that is asked or answered. But it must be.

When the urban and middle-class India—as across the world—faces an environmental threat it does not stop to ask in whose backyard it should be allowed. The fact is garbage is produced because of our consumption. The richer we get, the more waste we generate and the more we pollute. This consumption is necessary because it is linked to the economic growth model we have decided to adopt. But we forget that the more we consume, the higher the cost of collection and disposal of waste which we cannot afford. So, we look for band-aid solutions. In middle-class environmentalism there is no appetite for changing lifestyles that will minimise waste and pollution.

The Western environmental movement began after societies there had acquired wealth. The movement was a response to the mounting garbage, toxic air and polluted water resulting from the growth of their economies. They had the money to invest in cleaning and they did. But because they never looked for big solutions, they always stayed behind the problem—local air pollution is still a problem in most Western cities, even if the air is not as black as ours. It is just that the toxins are smaller, more difficult to detect or smell.

In India, we want to emulate the disastrous ways of the already rich, with much lesser resources and much more inequity and poverty. The fact is we cannot find answers in the same half-solutions they invested in. This is the biggest challenge of India’s environmental movement. We can do things differently to reinvent growth without pollution. But only if we have the courage to think differently. I hope we will.