With most political parties having set their sights on the 2014 national elections, the Congress-led UPA government is surely hoping for a repeat of the 2009 miracle. A good part of the credit for the 2009 victory has been given to progressive legislation like the employment guarantee Act. It is no surprise then that the Congress is looking at more such pieces of legislation before the country goes to the polls. One such legislation on the anvil is a new land acquisition bill which, it is said, will bring justice to the land owner and the displaced—and votes to the Congress. But given the current form of the bill, it is unlikely to do either.

The new bill was introduced in Parliament in September 2011 by the rural development ministry and has negotiated a tortuous path through a Parliamentary Standing Committee, the ministry, the cabinet and a group of ministers. On December 17, 2012, the ministry introduced a notice of amendments, with more than 150 changes, to the original bill. The bill is now slated to come up in the budget session.

The bill’s most important provision is the requirement of consent of 70 per cent or 80 per cent of the to-be-affected people before the state can acquire land for a public-private partnership or a private enterprise, respectively. This is a significant step in fulfilling a long standing demand of people’s movements. Such movements—from struggles against the dam on the Narmada to the more recent ones in Singur, West Bengal, and against the POSCO steel factory in Odisha—have demanded that decision-making process of a project must give meaningful say to local communities. 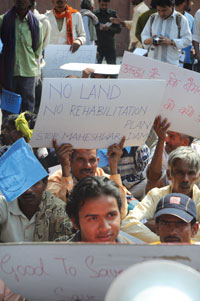 Another significant provision of the bill is social impact assessment (SIA) as the first step once the government intends to acquire land for public purpose. Significantly, SIA will have to include an “assessment whether the proposed acquisition serves public purpose”. The proposed legislation also requires constitution of an expert committee to review SIA. If this committee finds that “the project does not serve any public purpose” or “the social costs and adverse social impacts of the project outweigh the potential benefits”, it shall recommend the project be “abandoned forthwith and no further steps to acquire the land... initiated”. The government can reject this recommendation, but it has to give reasons in writing.

In spite of these and several other positive provisions, there is little chance the bill will ensure justice to the affected. This is because the bill has many lacunae. For example, why should the condition of consent of the affected people hold only for private projects? Will a government-owned dam or thermal power plant have any less impact on the people? Moreover, given today’s policy of privatisation and divestment of publicly owned companies, what would happen if a government project acquires land without consent but this project is subsequently sold to private owners?

It is true that the expert committee has the right to see whether the proposed land acquisition and the project are serving public purpose. But the definition of public purpose given in the bill is so broad that almost any project can be shown as public purpose. For example, any electricity generation project is considered a public purpose project.

According to a study by the Prayas Energy Group in Pune, the power generation capacity of thermal (coal- and gas-based) power projects in the environment clearance cycle is close to 700,000 MW. This capacity is three times the thermal capacity that will need to be added in the next 25 years as per the long-term projections of the Planning Commission. How can we say that each of these projects will serve a public purpose? But the bill does include all power generation projects as those meant for public purpose. And since the committee will have no room to assess the public purpose of any project outside the scope defined by the Act, this power of the committee is as good as non-existent.

The resettlement and rehabilitation provisions of the bill are too weak. It certainly has a provision for increased cash compensation, but overall the provisions are inadequate to even restore the house, habitation and livelihood of the displaced.

Moreover, many elements of resettlement are to be provided only in cash. The bill only provides for compensating people belonging to the Scheduled Tribes and the Scheduled Castes with land up to one hectare. Others will be compensated with land only if their holdings are acquired for irrigation projects. Here, the provision is for a minimum of 0.4 hectare, but there is no condition to ensure that this minimum limit does not become the de facto maximum limit.

In fact, many provisions of resettlement are based on minimalist principles, that is, they create the smallest possible legal entitlement. For instance, houses to be provided are as per norms of Indira Awas Yojana, and employment is to be offered “at a rate not lower than the minimum wages provided for in any other law for the time being in force”. What is the point in saying this, when there is another law that ensures minimum wage? This raises the suspicion that the displaced will get jobs that pay the minimum possible. Several other resettlement provisions are rendered ineffective by pre-fixing them with words such as “as far as possible” and “efforts will be made”. This includes important issues such as granting fishing rights in reservoirs to oustees and providing irrigation for land given to the displaced.

Last but not the least, the provisions of the bill will not to be applicable to all land acquisition in the country. For example, land for coal mining—a significant part of the land that are to be acquired in the near future—will continue to be acquired under the Coal Bearing Areas Act.

Looking at these and other parts of the bill it is clear that it will not be able to deliver justice to those losing land or being displaced. One cannot but ask, is it the weakness of the government, or is it the power of the vested interests that is responsible for this situation? Whatever may be the case, the message to the displaced is clear: “Aage aur ladai hai (There is a long struggle ahead).”

Shripad Dharmadhikary is an activist and researcher on water, energy and developmental issues. He works with Manthan Adhyayan Kendra in Barwani, Madhya Pradesh, and can be reached at manthan.shripad@gmail.com