Mined to death: an elegy for the rivers of Meghalaya

The rivers in the Jaintia Hills have turned deep blue; mines and cement factories have killed all fish and aquatic life in them 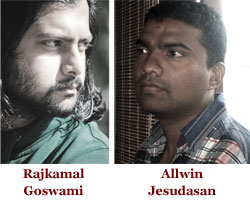 Narpuh reserve forest, deep inside the Jaintia Hills of Meghalaya, is among the few good forest patches which has withstood the intense pressures of growth, development and mindless extraction of natural resources like coal and limestone. It also forms an important watershed area with many important rivers originating from the hills. We visited the forest in March and November last year looking for birds and primates as part of an ecological study. The 200 km, nine-hour-long journey from Shillong to Pasadwar village, the range headquarters of Narpuh Reserve Forest Block 1, was dominated by large broom-grass plantations, coal and limestone mines, coal depots and busy, sooty and dusty towns and villages. 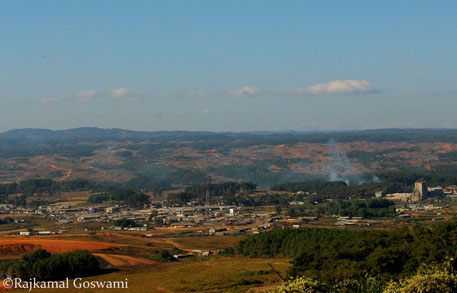 To reach the denser forests of Narpuh, it was imperative to boat across the rivers Prang and Myntdu. Thirty odd minutes into our journey, when we reached the confluence of rivers Prang and Myntdu, we noticed that the hue of the water turned blue rapidly and signs of life—fish, tadpoles and weeds—slowly disappeared. According to our boatman, Bah Michael, the river used to teem with life and the fish from the river used to be an integral part of the local staple diet. However, the river started bluing in 2007 and the fish soon disappeared, which according to Michael and other villagers of Pasadwar, is due to coal and limestone mining and cement factories. 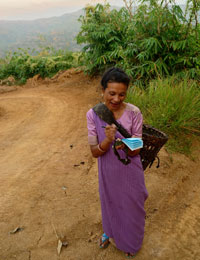 After a few days as we went to Block 2 of Narpuh on the northern side of the reserve, we saw another bluer and bigger river, the Lukha, in Sonapur on NH 44. We stopped for refreshments at a small wayside dhaba which stood right on the bank of the blue Lukha. As we were shooting the river from the window of the dhaba, its owner, a man in his early 50s, started to narrate his own tale of tragedy in fluent English. According to him, not long ago the Lukha, a lively river full of fish and other life forms, used to be the main source of potable water for daily use and subsistence income for the local fishers. But all that changed in 2007, when almost all the fish and other life forms died overnight, destroying the local fishery industry as well as the various fishing competitions for which the Lukha was locally famous.

The various dhabas of Sonapur, including his, were famous for serving dishes made from the fish of the Lukha, without which any wayfarer’s journey remained incomplete. Sonapur supported quite a few dhabas as it stands on the busy NH 44, the only all-weather road that connects Barak valley of Assam, Mizoram and Tripura to the rest of India. However, with the fish dead, the local dhabas have also suffered and the villagers in and around Sonapur can’t use the water flowing right through their backyard. Instead, they now have to trek several kilometres to get water for drinking and other purposes like washing, cooking and cleaning.

The problem of acute shortage of potable water is compounded by the complete absence of reclamation of abandoned mines, resulting in the proliferation of unused mine pits and caves in large areas which causes the surface water to percolate and disappear in the pits. As a result, smaller streams and rivers of the area are either dying or becoming seasonal. “The ‘reservoir of fish’ has now become its graveyard,” said the elderly dhaba owner sarcastically after explaining that the word lukha in the local Pnar language meant ‘reservoir of fish’.

Like the villagers of Pasadwar, he also blamed coal and limestone mining and cement industries as does the Meghalaya Pollution Control Board (MPCB)’s 2008 report, Investigation Report on the contamination of the Lukha River. In unambiguous terms, the report states that the Lukha was polluted and turned blue due to its tributary, the Lunar which came into direct contact with the mixed coal and limestone mines' leachate and effluents. This cocktail of contaminants was so deadly that it not only killed the fish and other life forms of the Lunar river, but also those of the Lukha. However, there was no mention of the precise reason for the bluing. Many villagers found it hard to believe that coal mining was responsible; they felt that it was due to the cement factories that their rivers were dying the blue death. To them this link was quite evident since it was only from 2007 that the cement factories started large-scale limestone mining and production activities in the area.

Since 2007, according to the villagers and news reports, the river water has been turning blue every year during the month of November and stays so till monsoons when high rainfall dilutes the pollutants. Cut back in mining and production during monsoons, also, perhaps helps to cut down on the pollutants. But the question was why this sudden bluing in 2007, whereas mining has been going on since colonial times. Earlier, too, as reported in 2003 by Sumarlin Swer and O P Singh of Centre for Environmental Studies, North-Eastern Hill University in Shillong, the rivers of Jaintia Hills were gravely affected by acid mines drainage (AMD) originating from sulphur-rich coal mines through spoils, leaching of heavy metals, organic enrichment and silting by coal and sand particles. The report said the waters of the rivers were characterised by low pH, high conductivity, high concentration of sulphates, iron and toxic heavy metals, low dissolved oxygen (DO) and high biological oxygenation demand. The advent of the cement factories, thus, was like the proverbial final nail in the coffin for the terminally ill rivers.

Interestingly, according to the MPCB report, the Lukha turns blue only after merging with the river Lunar. To corroborate this fact, we trekked up to the confluence point and found that the Lukha was just a narrow stream and the bulk of the water was drained by the Lunar and its numerous streams carrying effluents from Umshnong and Lumshnong, two upstream hamlets where the majority of the cement plants are operational. The colour of the Lunar’s water was brownish red and turned blue only after 50-100 meters from the confluence point. The Lukha, before meeting the Lunar, is drained by several streams originating from Sutunga, where the coal mining activities are very high.

What renders the river blue? Why does it turn blue only after the confluence and what does it indicate? As of now neither we nor anyone else has convincing and conclusive answers. However, we would like to reiterate that irrespective of what gives the blue colour, it is an uncontested fact that the rivers are poisoned to death. 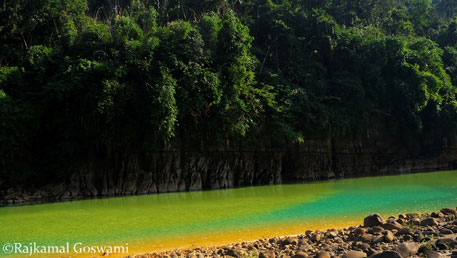 On our way back to Shillong, after wrapping up our survey, several questions haunted us. If the mines have caused such havoc to such large number of people, how come the mines still thrived? What role does and can the environmental regulating bodies like the pollution control board and Union Ministry of Environment and Forests play? After going through extensive literature on mining and the laws regulating it and talking with various actors holding direct and indirect stakes in mining, what we understood and learnt was deeply disturbing.

Operating at a micro-scale level with thousands of small mines spread across the length and breadth of the state, mining has no doubt contributed to the income of many indigenous people. But this lone silver lining is highly contested today. At its very best, mining activities in Meghalaya are nestled in vague and ambiguous space operating in a nebulous and hazy gap lying somewhere between the legitimate and illegitimate. At its worst, however, it sustains itself on child labour, exploitation, mafia, rampant corruption, administrative irregularities and indiscriminate flouting of legal and environmental regulations, resulting in damage and disruption of natural and socio-cultural environment.

According to the Indian Coal Mines Act of 1973, coal is classified as a major mineral in India, implying that only a public sector undertaking or its associate bodies (sub contractors) can mine an area once it obtains the mandatory licence from the Central government. This means that practically all coal mines in the Jaintia Hills, since they are unregistered, are illegal. Yet the trade of this illegally extracted coal is under an indirect control of the Indian state since taxes and royalties are collected both by the Central and the state government. The situation in the limestone mining and cement industries, too, is no better, a leading environmental scientist who was formerly the chair of the Expert Appraisal Committee of Meghalaya, told us. According to him, most cement companies prefer to install small but multiple factories so as to avoid an environmental impact assessment (EIA).

However, once established, they increase their output capacity which then only require a clearance from the Central government. EIAs in Meghalaya, like elsewhere, remain a cruel joke. Apparently, a multi-national cement giant while in the process of setting up a factory in Jaintia Hills, in its EIA reported the presence of the flame lily (Gloriosa superba) although it occurs only in and around the Western Ghats in India. The company still managed to get the clearance after a second application after correcting the mistake. The above example and the Lafarge controversy, which was highly publicised due to the public interest petition against it in the apex court of India, amply exhibits the culpable nature of the industrial establishment.

Numerous civil rights and human rights activists, other NGOs and eminent personalities from the state have been highlighting such issues for a long time but the debates and the dissent are fragmented over the various issues or are just too small to capture the imagination of the state or the nation. But the sudden bluing of the river has in some way galvanised a larger audience, at least within the state, to think and talk about the issue. However, the fate of the rivers Lukha, Prang, Myntdu remains grim in the absence of political will or united public opinion, determined to set the wrongs of mining right. This is diametrically opposite in uranium mining issue, where people were united in their protests—student bodies, village councils, political establishments, press, local intelligentsia and the middle class—perhaps because the risk of hazards and possible impacts can be very high. But isn’t it also true that the coal mining has also wreaked havoc in terms of issues concerning health, local economy, cultural traditions, demography, biophysical environment? The rivers turning blue, perhaps then, is mother nature’s righteous indignation at the very people who, in spite of possessing the power to determine the destiny of the land, sadly, chose to destroy it.

Rajkamal Goswami and Allwin Jesudasan are affiliated to ATREE, Bengaluru and can be reached at rajkamal@atree.org