Mining bill gets it right 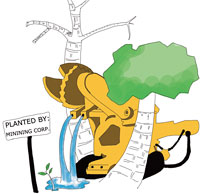 Sustainable mining is an oxymoron. Environmentalists will tell you this. Mining—coal to limestone—takes away forests, devastates mountains and leaves the land pockmarked. It also destroys livelihoods of people and displaces them. Worse, modern, mechanised mining takes away livelihood based on land but does not replace it with local employment—all estimates show that direct employment in the mining sector has fallen sharply. It provides wealth, but not for local development.

This is where the dilemma kicks in. There is also no doubt that the nation will need to mine its natural resources for industrial development and saying no will not work. Therefore, the solution to mining is to find ways in which devastation to the environment is minimised. The solution is also to create a framework that will share the benefits of the resource with poor communities living in these rich lands. It is a challenge.

What should be the strategy to meet this challenge? The answers are difficult and diverse. But one part (small, but not insignificant) is to establish the principle that people will be stakeholders in the development of the natural mineral resource. This is not a new idea but is certainly neglected and discredited. In 1997, the Supreme Court ruled that private leases over mines would not be allowed in Schedule V areas, which are predominantly tribal. The Samata judgement, as it is known, was named after the tribal activist group, which had taken the matter to the court on behalf of Nimalapedu village, where the Birlas wanted land for calcite mining. The court ruled that in these scheduled areas the land owned by government could not be given to a non-tribal entity. However, if after due process—permission from the state governor—mining was allowed, then the entity would have to follow conditions set to safeguard sharing of benefits and protect the environment. The court ruled that “at least 20 per cent of the net profits should be set apart as a permanent fund for community use”. But this judgement was an unacceptable game changer for the fast-growing and powerful mining sector. It was overturned or simply sidestepped.

In 2008, the Centre for Science and Environment’s report, Rich Lands, Poor People: is ‘sustainable’ mining possible?, discussed the global practice and imperative of sharing benefits with people. This was also the time when the country was beginning to revisit the provisions of outdated Mines and Minerals (Development and Regulation) Act, 1957. In 2006, the Hoda Committee, named after its chairperson Anwarul Hoda, the then member of the Planning Commission, was formed to recommend changes in the mining policy. The committee’s report, unfortunately, was steeped in the interests of the mining industry as it saw no need for sustainability (except for some weak and inconsequential words) and certainly had no time to waste on people’s interests.

But for once better sense prevailed. The Hoda report was junked as the Union ministry for mines began work on the new draft bill, amending the 1957 Act. This draft amendment included, for the first time, a provision for sharing benefits with the people. The first, and the most logical, idea was to create a system of granting equity (26 per cent) in companies. This would, as suggested by the Supreme Court, work towards build local control over mining companies and shareholders with interests in sustainability. But this idea, too, was killed. Mining companies led by their powerful lobbies, like FIMI, CII and FICCI, launched a virulent attack on the very principle of “benefit sharing”. Their argument was that if this bill went through then tribals, flush with money, would take to drinking and “beat up their wives”. The contempt for people was open and deplorable.

Finally, after much pushing and shoving, the draft bill went to the Group of Ministers (GoM) in June 2011. The draft included the provision for profit-sharing. But even at this last minute there was pressure to dilute the provision. The confidential note for the GoM ingeniously suggested that the current provision of royalty was sufficient. There was no need to introduce any direct payment to communities.

Once again, better sense prevailed. The GoM has reportedly insisted that the principle of benefit-sharing must not be diluted. But to make it easier to compute benefits it decided to ask for 100 per cent of the royalty paid on minerals (doubling current royalty) to be given to local communities through the district-level fund—roughly Rs 4,500 crore, and higher than what would have been given through profit-sharing. This would not apply to the nationalised coal sector, which would pay 26 per cent of the profit. Now the detailing of the fund needs to be worked out.

This is the first time the concept of natural resource rent is being established in the country. In this age of green accounting the wealth of a nation should be re-measured in terms of its value to equity and sustainability. Green growth is fundamentally about inclusive growth. So this baby step towards benefit-sharing is one that needs to be watched and supported.