Of fairytales and GMOs 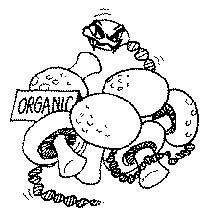 much before genetically modified organisms ( gmo s) were a reality in the true sense, I read an article that spoke of the possibility of wings on pigs through genetic modification. To say the least, it was so very amusing. Today, many of these things are at our doorstep, generating both confusion and awe. Moralists seek the high ground, while champions of the underprivileged talk of the evils springing out of genetic modification.

In any discussion involving gmo s, a brief look at the prevalent conditions of the area is a must. This is especially true for a country like India, where the web of socio-economic considerations is intricately wound. Moreover, a depletion of natural resources is bound to occur with increasing population, and the population front is one of those problem areas that India has not been able to do much about.Questions are aplenty, but the key question to ask at the outset is, where is all the food, and consequent nutrition, going to come from? The option of land expansion is limited in India due to being both expensive as well as a potential ecological risk. In a sense, with increasing population, cultivable land is decreasing. The other option, that of increasing productivity per unit area, looks better, but faces a block in the availability of seed varieties that would fill the requirements. These requirements, simply put, are high yields, high nutrition, better growth, improved resistance to pathogens, pests and abiotic stresses (caused due to non-living elements like chemicals) and eventually a low cost of cultivation.

Achieving all this by conventional methods is an arduous task, one that entails putting in a lot of time and labour. Recombinant genetics and gmo s on the other hand, provide a clear opportunity for more food and improved nutrition. By some assessments, about 12 million hectares under cultivation in the world today is of gmo s. In this, the us takes the lead and accounts for almost 75 per cent of this figure. The rest of the world fits in the remaining 25 per cent. The argument then is, why. Even if we do not consider India for the moment, due to its population being illiterate in the majority, why are gmo s not acceptable say, to Europe, where education levels are much higher, and the governmental agencies better organised. What are the risks involved? A gene transferred from one organism into another could have adverse effects on the recipient. There may be possibilities that unwanted genetic recombination may occur once the gmo is released in nature. Moreover, assessments regarding behaviour of the gmo in the field may turn out to be awry, there being absolutely no idea about the effect of the gene modification on biodiversity, environment and other such factors.

All these major concerns, however, have to be seen in the backdrop of what has been said earlier regarding food requirement in the coming years. In principle, the worries are normal, to some extent even justifiable, but clearly bordering on the fear of the unknown, and such a fear cannot be made the basis for rejection of a technology that promises to deliver the best. True, there may be teething troubles, as with any technology being introduced for the first time. But this has not deterred science in the past to advance, and I doubt if this will be a deterrent now. All problems related to a newly emerging technology are mainly of two kinds, either they emanate from an inherent defect in the technology itself, or from faulty use of that technology. Calculated risks have to be taken. The only underlying theme is that this calculation must be as flawless as possible.

Errors are inherent in any act of nature or humankind. Such errors must form the basis for future improvement. Several non-governmental organisations (ngo s) in India have opposed the use of gmo s, but somewhere along the line, a distinction has to be made whether this opposition is to the utilisation of a gmo per se , or use of a gmo by a multinational under proprietary conditions. The government must have adequate regulatory legislation and gene protection technology must be shunned. The masses have to be told what gmo s are all about. The ngo s must work in consonance with the government, opposing policies not instinctively, but on the basis of clear reason. The government must not consider an ngo as an adversary, but rather as another spoke in the wheel to prosperity.

I would advocate the use of gmo s in India, but with the caveat that assessments regarding the effects of release of a gmo must be made with caution and foresight. That the public be educated not only by politicians but by scientists as well, that scientific evidence be provided regarding safety, and that interests of the farmers be protected from multinationals, the terminator gene being a case in point.