With an increasing number of joint forest management projects being implemented, it is vital that forest departments become more gender sensitive. Unfortunately, there is a curious dearth of women field staff in the country's forests. 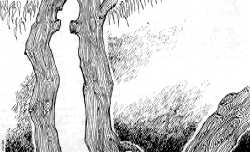 I WONDER how many people know that practically none of the country's forest departments has any women field staff? A few women have got into the Indian Forest Service by passing the all- India entrance tests, but they belong to the elite officer cadre, and do not ordinarily interact with villagers on a daily basis. In any case, their number is minuscule.

The fact is, there are almost no women range officers, block officers (foresters) or forest guards in the territorial divisions of forest departments. During the 1980s, under pressure from donor agencies, a few forest departments recruited some women field staff for "social forestry" projects, which, as a rule, are confined in most states to panchayats or private lands. Only in a couple of states does it deal with government- owned forest lands, which constitutes nationally almost one- fourth the total land area. It is on these lands that large segments of our rural -- particularly tribal -- population subsist.

With more and more forest departments initiating "joint forest management" (JFM) -- managing government-owned forest lands jointly with organised village groups in the vicinity -- there is an urgent need to increase female employment in forest departments. This is because in most parts of rural India, the primary responsibility for collecting fodder, firewood, medicinal herbs and roots and forest produce other than timber rests with women. If primary forest users are to be involved in JFM, the forest departments have to show more willingness to employ women.

When the Haryana Forest Department (HFD) decided in 1989 to adopt the JFM approach with the assistance of an external team of resource persons (of whom I am a member), we began our search for women field staff within the department. We found 15 women "village forestry workers" (VFWs) had been recruited for the World Bank-funded, social forestry project. (The plan was to recruit 300, but someone stopped further recruitment of women because of their alleged "failure"). The women VFWs enjoyed a rank equivalent to that of territorial forest guards.

We were able to persuade two of them to join the JFM support team. But this was just for starters. Institutionalisation of the programme meant that the department required women to solicit village women's participation on a routine basis. But there were no women range officers, no women block officers and no women forest guards in any of the territorial divisions.

This led us to explore why there were no women field staffs. Was there a rule forbidding women to apply for these posts? Even senior officers of the department had no clear answer. They felt that this couldn't be the case as it would be violative of the constitutional principle of equal rights. But then why was this so?

Digging through the files in the HFD's head office revealed although there was no rule barring women from these jobs, someone years ago had added the proviso "only men need apply" to the requisition sent by HFD to the Public Services Commission and the Subordinate Services Board, the two bodies responsible for recruiting new field staff. This proviso has finally been removed in the HFD; perhaps, a similar excision needs to be done in the FDs of other states.

Next, while keeping an anxious watch on the trends in fresh recruitment of HFD field staff, it became apparent that there was yet another major hurdle to be crossed -- that of physical standards. All FDs have clearly specified the physical standards set for recruiting male field staff. These include minimum height and normal and expanded chest measurements. No such standards have been prescribed for women staff. In Haryana, senior officers decided physical standards set for policewomen could be adopted by the FD. But the inspector general of police's office did not care to respond and so the matter continues to hang fire.

The few women who overcame all the hurdles and got into the FD, then had to face innumerable problems in the department's totally male culture. Male officers not only held stereotyped notions about the unsuitability of women for "tough" forest work, they also felt distinctly uncomfortable about having women in their charge.

A workshop with Haryana's women VFWs revealed besides facing problems concerning accommodation, child care facilities and transportation, most of them had been transferred from field to office jobs without being consulted, though the impression going round was that all the women had requested transfers to office jobs. Not a single woman VFW was given charge of even a social forestry beat, whereas their male counterparts, though junior to them by several years, had moved up the ladder. The creation of "special" VFW posts for the women only resulted in their being left unclear about their promotion prospects.

The Union Ministry of Environment and Forests needs to examine the issue of female recruitment comprehensively and evolve clear guidelines for state FDs. Otherwise, FDs will effectively continue to practice for a long time to come the unstated policy of "only men need apply".

Madhu Sarin is an urban planner, a social activist and a consultant to voluntary groups working on involving women in forestry.