Planting trees is not doing your bit

On World Environment Day this year I was at a five-star hotel. It was among the older ones in Bengaluru. The hotel had organized a week-long initiative to green Bengaluru. The idea was hackneyed. Of course, we need as many trees as we can get to absorb the carbon we release in the atmosphere in huge volumes. But we need to do more than just planting trees. While listening to the experts at the meet, I looked at the ceiling. I realised the hotel used old energy-inefficient halogen bulbs. I took a walk to the washroom outside and found that the entire lighting was with incandescent halogen bulbs.

While waiting for my turn to get to the podium, I did some idle maths. I reckoned they were over 200 lights hanging from the ceiling of the conference room at the hotel. Some more calculations and I reckoned they were using up about 10 units every hour of the lighting. I extended the number to the entire hotel, and estimated the daily consumption of energy at 5,000 units only for lighting. Combining the centralized air-conditioning, the pumps and the array of cooking and other appliances that help a five-star hotel offer service to its customers could well mean 4.5 million units a year, I thought. About Rs 30 lakh a month, or Rs 3.6 crore a year.

I might be wrong in the estimates but my argument is: a simple initiative by the purchase department of any hotel could reduce energy used per day by a staggering 70 per cent for lighting alone, and 40-50 per cent on air-conditioning and other high-induction-based appliances.

I said to myself: “Now why will not someone want to save Rs 10-15 lakh every month by doing away with halogens and incandescent bulbs, and switching to the new-generation, energy-efficient CFLs and LEDs? Why would they not think of this as a green initiative? Instead, why would they waste time on ceremonial projects such as planting trees on an Environment Day?” It is quite possible managers resist change, especially a manager lower down the hierarchy. Who would want to incur the wrath of senior management at the corporate headquarters— which could be outside India as well— with a decision taken locally? A well-intentioned hotel, such as the one where I was, would do well to understand that saving of every unit of energy is equal to saving one kilogramme of carbon emission. 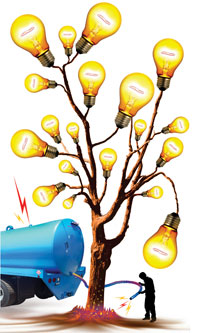 Climate experts say every 700 units of such energy saving is equivalent to protecting a full-grown tree. If 4.5 million units of energy are saved a year, the hotel could claim to have saved or protected 6,500 full-grown, 40-year-old trees every year. The hotel would also do well to understand that the saving of 4.5 million units of energy in a year means saving the hassle of investing in 4.5-5 MW of conventional power. That is a benefit any government will welcome, considering the capital cost of installing 1,000 MW plant of conventional generation is about Rs 5,000 crore.

To understand the ecological cost of power generation with hydel dams or thermal plants, think of the damage such dams cause to complex ecosystems in our hills and forests. Easier still, look at the bleak landscape in the vicinity of thermal power plants in the country, with mile upon mile of heaped fly ash, which results from the burning of coal in thermal plants. We can keep writing grim reports on climate change and global warming. We can continue to berate the government for its inability or incompetence. That is not going to help. But if we did our bit in our homes, hotels, offices and hospitals, and in energy-guzzling industry, we will be on the road to beating the energy crisis. And all it will take is steps that are easy, affordable and economic.

The writer is CEO of Biodiversity Conservation [India] Limited , a green building company in Bengaluru