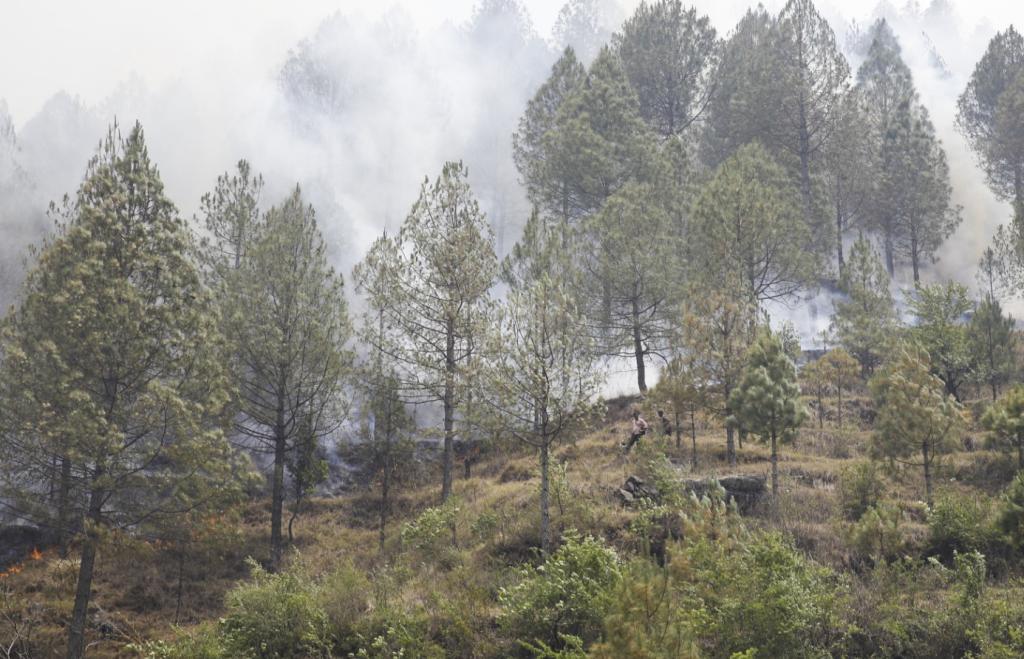 Uttarakhand recorded 361 incidents of forest fire in the first five days of April, which damaged 380 hectares (3.8 square kilometres) of reserve forest areas and 567 hectares of forest land in total.

Forest fires have become an annual event for the Himalayan state — and they are only getting worse by the year. The current spell has been raging since mid-February.

These fires are, perhaps, worse than the annual farm stubble burning incidents witnessed in Punjab and Haryana. They, however, do not get even a fraction of public and media attention because the smoke does not tick off the air quality monitors of Delhi.

But shouldn’t the air quality and health of Uttarakhand people get attention? It is difficult, for their air quality is not monitored.

No noses in the Himalayas

Wildfires in the forest of Similipal, Odisha, in March 2021 underscored the absence of a real-time air quality monitoring system in the mineral belt of India. Northern Himalayas and adjoining Terai region is possibly the second-biggest dark zone in India’s real-time air quality monitoring network after the mineral belt. It is probably even darker given the rugged topography.

Uttarakhand and Himachal Pradesh — both approximately the same size as National Capital Region (NCR) — do not have a single official real-time air quality monitor. NCR has over 80.

In fact, there is not a single real-time air quality monitoring station between Srinagar in Kashmir and Siliguri in West Bengal, that spans a distance of 1,500 km. Except one station in Srinagar set up earlier this year, there are no monitors in cities of Union territories of Jammu and Kashmir and Ladakh.

Similarly, lack of monitors was conspicuous in the Terai belt of Uttar Pradesh and Bihar. Sikkim and Anurachal Pradesh also have no real-time monitoring stations. 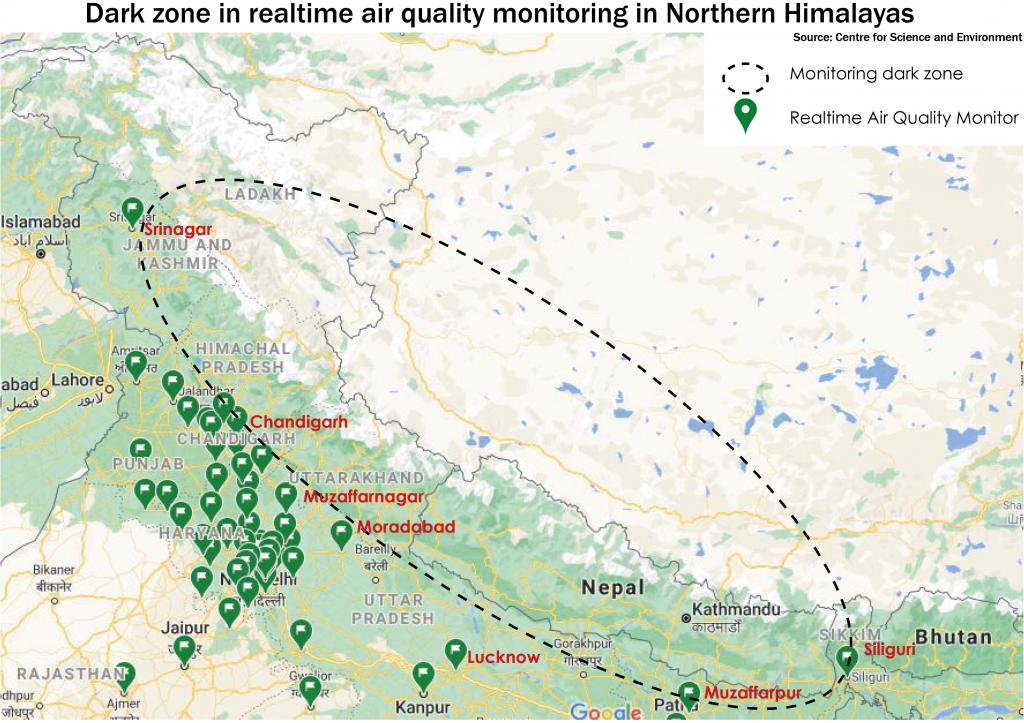 What does Delhi air show

The farm stubble fires that choke the national capital and most of Indo-Gangetic plains in November are assisted by wind and cooler weather conditions. The smoke from the Uttarakhand fires is mostly getting trapped within the Himalayan valleys.

Small fraction of it that escapes the hills is blown thin and high by the hot winds currently prevailing over the northern plains. But on certain days with suitable wind conditions, the smoke does reach Delhi.

Given the hot weather conditions, however, its impact is not as dramatic on city’s air quality.

The most pronounced impact of this smoke entering Delhi was noted in the first week of April. Particulate matter 2.5 at citywide level (average of all 40 stations of Delhi) met the national standard till April 1; levels steadily rose and more than doubled to 122 microgram per cubic metre (µg/m3) by April 6, categorised poor under Air Quality Index (AQI).

This rise is not enough proof of the smoke from the hills entering Delhi’s air, but the sudden change in balance between PM2.5 and PM10 is a strong indication. The percentage of PM2.5 in the PM10 was 24 per cent on April 1, but it grew to almost 40 per cent on April 2 and has stayed at that level since.

This is unusual, for this season is known to be dusty (high PM10 with low PM2.5 percentage) and not smoggy. Smoke from Uttarakhand fires is certainly entering Delhi.

Another indicator of the smoke entering Delhi is change in citywide nitrogen dioxide (NO2) levels that saw more than 100 per cent rise since April 1.

NO2 is primarily emitted by burning fossil fuels and organic matter. Given there has been no major increase in traffic or open fire instances within the city this astounding spike in NO2 levels is most certainly the impact of the smoke from the Himalayan fires.

This is further corroborated by wind direction data that shows winds did change directions and started blowing towards Delhi during the first week of April.

These are similar PM2.5 levels that caused Singapore to declare emergency in 2019, after smoke from wildfires in Indonesia blew into the city. But this is not alarming enough for Delhi — it is desensitised by winter smog that has five-six times higher PM2.5 levels.

But why be dependent on Delhi?

Forget real-time monitoring, they don’t even have manual PM2.5 monitors. No doubt people in the cities don’t care much for these as these fires are raging in the hinterlands. They are not aware how these distant fires are poisoning their air and health.

There is a need to generate public interest in local air quality as that is only thing which can drive change and accountability. There is power in knowing what ails oneself. It gives knowledge to seek proper remedies, not just for one’s own personal health, but also from the authorities. Government of India itself recognises the need to inform the public on health warnings on a daily basis to improve air quality management.

People need to know the air quality in their cities and towns to safeguard their health and abode.

The knowledge has initiated a change in Delhi and other mega cities. The Himalayas and its residents deserve the same.