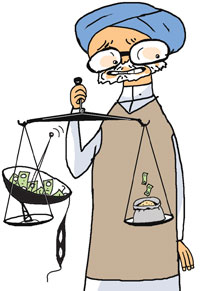 Let me reproduce here one of the most extraordinary statements by a prime minister in recent memory. “I am not in a position to say that there is a foolproof method in which one can determine the extent of the loss. It is very much a function of what is your starting point. And (it) also depends upon our opinion. We have a budget which gives subsidy for food, 80,000 crores per annum. Some people may say these food grains should be sold at market price. Will we say then because they are not sold at market prices, because you are giving them a subsidy, it is a loss of 80,000 crores?”

This was Manmohan Singh talking to TV journalists at a special press conference he had called on February 16 to clear the air on the 2G spectrum scandal.

The statement which came at the end of a lacklustre interaction did leave many in the media and those watching the proceedings nonplussed. What was the prime minister trying to convey? That the huge loss to the exchequer estimated by the Comptroller and Auditor General was presumptive since no auction had taken place? Fair enough. But why the analogy with subsidies, specially the one provided on food? If he was implying that some kind of subsidy was being given to the telecom companies who were allotted 2G spectrum then it needs some clarification. (In any case, the figure for food subsidy that the prime minister tossed around is exaggerated. Last year’s tab was less than Rs 60,000 crore—Rs 58,242.45 crore to be exact —and for 2010-11, it is expected to be around Rs 74,000 crore.)

And he expatiated on this theme to make the analogy clear. “We subsidise the price of kerosene to an extent which is greater than many other subsidies, that imposes a burden on our oil marketing companies. Should we say then that because we give subsidy for kerosene sales under public distribution, that there is loss of revenue?” Good question, but one which the prime minister himself needs to answer. In this instance was the government subsidising the huge telecom companies and who would be bearing this burden?

Manmohan Singh is not your garden variety politician. He is an economist of repute and surely knows the difference between providing a subsidy and handing out scarce resources to companies at greatly undervalued rates. A subsidy is a subvention, a form of financial support to those who need it the most. The food grain subsidy and the kerosene that is supplied by the public distribution system (PDS) are meant for the neediest in this country, primarily those who fall below the poverty line. And there are compelling reasons PDS, badly administered and leaky though it is, needs to be there.

This is a country of hunger, the hidden hunger of the desperately poor, of widespread malnutrition that is manifest in the obscene skeletal figures of children and adults, of hunger that leaves huge numbers of its children stunted for life and women so anaemic and ill-nourished that they die during childbirth or give birth to underweight babies. All of this helped put this country way up on the International Food Policy Research Institute’s Global Hunger Index 2010. It placed India 67th among 85 countries in terms of access to food and among the 29 countries with the highest levels of hunger.

Yet the government is engaged in protracted wrangling over who among the needy should be entitled to some form of food security and which proportion of the population should be grudgingly provided food grain through an executive order as and when supplies are available. In this context, the prime minister’s view of the food subsidy as a presumptive loss of revenue does not inspire confidence in the final shape of the National Food Security Bill, 2010, which has been in the making several years.

The chasm between what Sonia Gandhi’s National Advisory Council (NAC) has proposed and what the government is prepared to do is still wide going by what the expert group constituted by the prime minister has to say on the subject. The group headed by C Rangarajan, who also happens to be the chairperson of the prime minister’s economic advisory council, has diluted the proposals across the board on account of the costs, non-availability of food grain and the potential distortion of open market food prices.

According to NAC calculations, close to Rs 80,000 crore would be required to feed 75 per cent of the population that it wants brought under the security umbrella. But the expert panel begs to differ; it says the figure would be Rs 92,060 crore. So while the Supreme Court and members of a joint parlia mentary committee begin examining the ‘subsidy’ that telecom companies got from A Raja, the prime minister will have to decide soon whether “loss of revenue” on account of the food subsidy is politically expedient.