Kyotos successor should put an economic value to rainforests. A recent treaty shows how

Kyoto has been a start. The most ambitious attempt to address climate change till date, it has mobilized more than 180 countries to agree on a protocol to reduce greenhouse gases by 5.2 per cent below the 1990 levels by 2012; establish systems to estimate, monitor and report on emission compliances; invest in clean technology exchanges; and build mechanisms for trading carbon offsets.

Now it is off to the second round of negotiations to hammer out Kyotos successor agreement. The United Nations Framework Convention on Climate Change (unfccc) is working towards a December deadline to have the new agreement endorsed in Copenhagen. Lessons learnt from Kyoto are being taken forward.

One of the weaknesses of Kyoto has been that it has largely looked past the pivotal role standing rainforests play in climate control.Countries that preserve rainforests, providing carbon sequestration benefits to the world, end up with little support. Kyotos reforestation programmes, while well intentioned, have the perverse effect of rewarding countries for replanting saplings after they have cut down their forests; while those that take pains to preserve their forests in the first place are left out in the cold.

Policies are required to disincentivize the destruction of rainforests around the equatorial belt. Failure to stabilize this loss and preserve the cooling effect of the rainforest could only mean increasing climate instability, rising sea levels, flooding, hurricanes and desertification. And emission reduction in industrialized countries will be like trying to inflate a leaky balloon improvements made at one end will be lost at another.

The Eliasch review on climate change commissioned by the UK government in preparation for Copenhagen puts forestry as the third largest source of greenhouse gas emissions larger than the global transport sector. The report estimates that tropical forests the size of England are cleared every year, and that the current annual emissions from deforestation are comparable to the annual CO2 emissions of the US.

Against this backdrop, and with Kyotos successor agreement negotiations in mind, Guyana, an Amazon basin country, and Norway have joined a bilateral initiative under the unredd programme (Reducing Emissions from Deforestation and Forest Degradation in developing countries) to demonstrate a practical model for avoiding rainforest deforestation. It is called the low carbon development strategy.

Under the agreement, Norway will provide interim financial support to help offset the economic benefits Guyana forgoes from timber extraction, post-harvest agriculture and mining as it transitions its economy towards a low carbon development strategy, with a focus on hydropower, drainage and irrigation.

The process intends to demonstrate deforestation is neither arbitrary nor inevitable but an economically rational outcomethat can be substituted if there are balanced incentives. 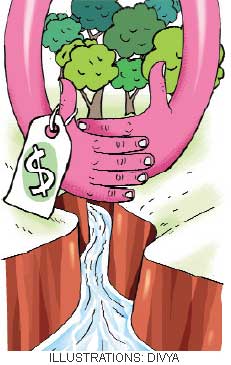 Somethings amiss in a valuation system in which the life-sustaining lungs of the planet are worth more dead than alive.

Contrast the above with Google, for example, which has a highly liquid capital of some US $127 billion. Google has no inventory and its service is arguably replicable. Yet it finds itself better positioned to grow, prosper and drive economic value than the irreplaceable rainforests of the world.

Let us consider another example. The US Department of Energys Office of Science reports that over three million patents have been filed as a result of the Human Genome Project. I am not endorsing patenting of genes, but the practical takeaway from the Genome project and the Google example is that once there is mental accommodation, putting a value on rainforest services will not be difficult. They can then compete on an economic basis with the incentives to deforest.

Under Kyoto, rainforest preservation does not receive recognition for carbon credits. For this to be corrected in the next round, awareness and support for change has to be ramped up.