The afternoon of May 12 will haunt memories of parents of school going children of Sichuan Province in China for years. Thousands of children perished under the collapsed buildings of their schools as an earthquake measuring more than 7.9 on the Richter scale jolted the province. Photographs of the collapsed school buildings bear ample testimony to their shoddy construction.

Sichuan is not the only earthquake-prone area where safety has been given a short shrift in the construction of school buildings. In Muzaffarabad in Pakistan-administered Kashmir, parents of more than 17,000 school children are still grieving over loss of their dear ones in the 2005 earthquake.

Caution is thrown to the winds while constructing school buildings in earthquake-prone areas in India as well. In earthquake prone Uttarakhand, no educational institution can withstand tremors of high-magnitude.This is a serious lacuna in a state where education is accorded high priority the state has a literacy rate of 71.6 per cent and there are 16,774 schools at the village level only. The most earthquake prone districts of Bageshwar and Chamoli districts alone have more than 2,350 schools. Even if we put a conservative figure of 70 students per school, the total number of kids exposed to a disaster on a working day is 1,64,500.


The condition is not less serious elsewhere. Shillong in Meghalaya, for example, has become a contemporary educational hub. Consequently hundreds of three to four storied private 'hostels' have mushroomed there, with 200 to 300 inmates each. But none of these buildings is designed to withstand strong tremors.

Earthquakes at Uttarkashi (1991) and Chamoli (1999) demolished many school buildings, says Prabhas Pande, director seismology, Geological Survey of India and an ace seismologist. Majority of school buildings in the state are made of mud plaster and a few have cheap rcc structures. None of these buildings are safe enough to withstand the shock of an earthquake, Pande says. 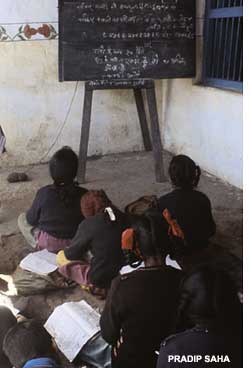 We could do well to learn from the experience of Nepal. The country has with the help of some ngos managed to make all its school buildings earthquake resistant. We can also seek guidance from other quarters. The 30-nation Organisation For Economic Co-operation and Development has a number of experts on school building safety in earthquake prone areas. It also has on its rolls experts who guide students and teachers prepare for the worst. The consortium has carried out detailed surveys of vulnerable school buildings of its member nations and experts on its rolls have designed earthquake safe buildings. In addition they have either retrofitted old buildings to make them more durable or reconstructed them with the help of locally available lighter and cheaper material.

We, however, need to be cautious about retrofitting even though it's a less costly option, because many school buildings in the hills may not be able to withstand hammering to drive in steel rails. Preparedness of school kids and teachers is a must and for that specially designed programmes are easily available. The National Disaster Management Authority of the Union ministry of home affairs has drawn up many such training programmes. In addition, the Union government keeps allocating funds for the safety of school buildings, as well as other buildings. These funds are hardly utilized says a state government official from Uttarakhand who did not want to be named.

In many schools in Bageshwar in Uttarakhand posts of teachers are lying vacant, while the enrollment of students is at its optimum. When there are not sufficient teachers to teach the regular curriculum, it is very unlikely that there will be any to teach students ways to save their life during an earthquake.

Are our children in the Himalayan states safe from the earthquake hazard? Only time and governments can answer this question. Till then a greater socio-political will and involvement is required to save our future from perishing in their alma-maters.