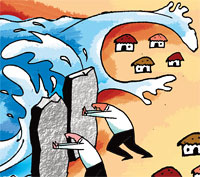 We were on a beach. Somewhere close to Puducherry. The sight was surreal: half-smashed houses with wide open fronts, people still living in them. The devastation was caused not by a sea storm or a cyclone, but by the eroded beach. The sea had crept up to the village; there was no protection between the sea and the village.

Why was this happening, I asked. My guides were members of the Pondy Citizens’ Action Network (Pondy­CAN), which has worked tirelessly to bring beach erosion to national attention. To understand this, we walked a little distance away. From the beach, I could see massive granite stones piled up to build a groyne stretching into the sea. This structure, made to protect villages from erosion, ends up with protecting one village, but destroying another, explained my guides.

But I still could not see the connection. How could one small structure like this change coastal ecology? Then I got a lesson of my life. Civil engineer Probir Banerjee and marine engineer Aurofilio Schiavina explained that a beach is not just a lot of sand. “Beaches are rivers of sand” because each year the waves transport huge quantities of sand from north to south and from south to north. During the southwest monsoon some 600,000 cubic metres of sand is moved towards the north, and in the three months of the northeast monsoons (when winds are fierce) 100,000 cubic metres are transported towards the south across the eastern coast of the country.

So beaches are living creatures—winds and waves bring sand in one season and take it away in another. My teachers further explained marine science to me: “Then, think of the groyne as a dam in a river which will block the movement of sand, not water.” In this case, the groyne has stopped the movement of sand to the beach ahead. This beach does not grow and when the wind changes, the monsoon gets fierce, the sea moves in. There is no beach to protect the land beyond.

“I played on the beach as a child,” said V Narayanasamy, member of Parliament from Puducherry and minister of state in the Prime Minister’s Office. “What beach?” I asked. All I could see was granite stones piled along the ocean promenade. By then it was evening. People had gathered, as they do to enjoy the beach and the sunset. But there was no sand or beach. Only rocks. All this had been lost in a living memory of 15-20 years. A people had lost their playground. More importantly, a city had lost its critical ecosystem, which would protect its land and recharge its groundwater. And fishers had lost their livelihood.

This is just the beginning, explained Banerjee. This structure, small by any standard of modern harbour or port, has spun a chain of beach changes along the coast. The groyne we saw earlier had been built because the length of the coast stretching 10-20 km was now destabilised. We could see piles of sand accumulated before the harbour, blocked from making its way to regenerate the beaches. Now every beach needs a groyne and every groyne adds to the problem of the next beach.

Besides, just think of the amount of granite that is brought from long distances after destroying hills, and the carrying trucks adding to nasty pollution. Just think how much is being lost only because we cannot plan to mitigate damage.

This is the key message. Ports are interventions to the natural ecology of coasts. But we neither understand the impacts, nor worry about ways to deal with the damage. A few years ago, Puducherry woke up to the reality that their harbour was to be rebuilt and contracts and concessions had been awarded to transform it into a massive port (with capacity to handle 20 million tonnes of cargo a year). The citizens’ group went to court against the project. But the developer—strangely enough, with no experience in ports, but in building shops and malls—is not letting go. This is a sweet deal, which brings real estate benefits as the port concession package comes with cheap city land bundled in for recovery of cost.

In this stretch of some 600 km, one can count seven ports that exist and another three are proposed. This is when each existing port is not used to capacity and is being upgraded big time. Then why are we building more ports? Is this development? Or land-grab?

There is no policy for siting and number of ports in the country. The Central government knows only about “major” ports and leaves the rest of the business—permission to locate and build other ports—to state governments. There is no distinction between a major port and a state port. It is just a matter of how many one can fit into the coast as fast and profitably as possible. Nobody, therefore, knows how many ports are being built. Nobody cares about the cumulative impact on rivers of sand.

Surely, this cannot be called development. Can it?