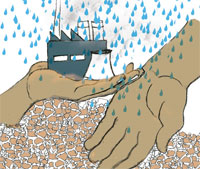 It’s drought time again. Nothing new in this announcement. Each year, first we have crippling droughts between December and June, and then devastating floods in the next few months. It’s a cycle of despair, which is more or less predictable. But this is not an inevitable cycle of nature we must live with. These droughts and floods are man-made, caused by deliberate neglect and designed failure of the way we manage water and land. What we must note with concern is that these “natural” disasters are growing in intensity and ferocity. That is why we must ask why we are still so badly hit when for years we have been doing everything to drought-proof our agriculture and economy.

This year, large parts of Maharashtra are hit by a severe drought. People are thirsty, crops are lost and livestock abandoned. Remember, it is the loss of this asset, which turns seasonal devastation into long-term destitution. The chief minister wants money for relief; the opposition wants to score points. But in spite of programmes, plans and money, we are not moving towards any real solution to this scarcity. Why?

Why when Maharashtra has had the longest programme for drought relief in the country? It was in the 1970s, when the state was similarly afflicted, that it devised the employment guarantee Act. It guaranteed work close to where people lived so that they are not forced to migrate. As the scheme was to check migration, city dwellers and professionals paid for it. Over time, the state government improvised and put the drought relief money in works that provided relief against drought such as building check dams and percolation ponds and conserving soil. The scheme was abandoned once its successor—Centrally sponsored National Employment Guarantee Programme—was launched in mid-2000s. But the work continues.

Maharashtra has also had a furiously spending programme for building irrigation projects. Since 2007—the time farmer suicides in Vidarbha hit headlines—the state has been given Central grants for water projects. According to the state economic survey, till February 2012, Maharashtra spent Rs 12,000 crore under this scheme alone. Then last year, the state received rainfall 102 per cent over the normal. So there was rain, schemes and money.

Let’s understand how we are going wrong in our strategies. First, rainfall is even more variable—scientists link this with climate change. In Maharashtra last year, rains were normal, but were either late or erratic. Farmers lost time waiting to plant the summer crop and then suffered due to intense or unseasonal rains. Increasingly capricious monsoon makes water management more urgent.

Secondly, irrigation projects have been built but not utilised. In this thirsty state, according to its own data, some 40 per cent of the potential created is not being used. Reports by the Comptroller and Auditor General of India speak about scandalous ways in which dams are built but canals are not and about cost escalations so high that projects become unviable and are never completed.

Thirdly, Maharashtra is the only Indian state to give industry priority over agriculture in allocation of water. So even when an irrigation project is built, water is diverted for urban and industrial needs. In Amravati, a drought-hit district, the Upper Wardha irrigation project was taken up for implementation under the prime minister’s relief package. But when water started to flow in the canals, the state decided to divert it to the Sophia thermal power project. Farmers protested vehemently. This resulted in the overturning of the policy that gave industry priority, but not in the cases where water was already allocated. Fights go on.

Today, the state’s Economic Survey accepts that only 50 per cent of the utilised water in its reservoirs is being used for agriculture. With rapid urbanisation demand for water will only go up. This will add to stress unless cities and industries become water prudent now—use less water and return clean water to farmers, not sewage.

Fourthly, water use is grossly inefficient. Maharashtra has a propensity for sugarcane-type, water-guzzling crops. This dry and water-stressed state produces 66 per cent of the crushed sugar in the country—way over what Uttar Pradesh, located in the Ganga basin, manages. So water available for agriculture is also not used wisely.

Fifthly, we forget underground aquifers meet a considerable part of water demand. So we do not factor in the need for recharge of groundwater. Instead we extract more and more water, leading to scarcity.

The sixth sin is our inability to link investment in watershed and soil conservation to groundwater recharge. In the past few years, attention has been paid to building ponds and tanks and to protecting watersheds. But investment in these assets—coming largely through employment guarantee schemes—is hardly ever productive. The schemes provide jobs and do not care about the quality of the work. Watersheds are planted with trees but protection of trees is not ensured. The tank is desilted, but the channels or the catchment that bring water to the tank are not.

In this way, we have made droughts perpetual—rain or no rain, money or no money.