As of now, conditions are favourable for its progress

As of now, conditions are favourable for its progress 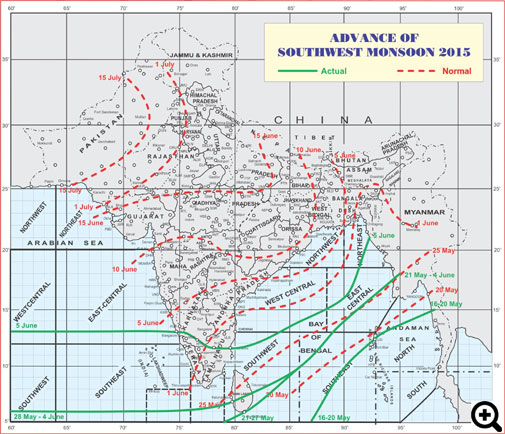 After a delay of four days, the southwest monsoon finally arrived in Kerala on Friday, June 5. According to a press release by India Meteorological Department (IMD), the southwest monsoon has advanced over the entire south Arabian Sea, some parts of central Arabian Sea, Lakshadweep, Kerala, parts of coastal and south interior Karnataka, Tamil Nadu and some parts of Bay of Bengal.

As of Friday afternoon, the Northern Limit of Monsoon (NLM) or its northern boundary was passing through Mangaluru (Mangalore) and Mysuru (Mysore) in Karnataka and Salem and Cuddalore in Tamil Nadu. The onset of monsoon was delayed in Kerala and southern India by five days even last year.

This year, the monsoon reached the Andaman and Nicobar Islands region on time, but lost its momentum and lingered around Sri Lanka for more than a week. Thus, it missed both its normal onset date and the date forecast by IMD (May 30).

It is also running late in the North East and eastern India as the Bay of Bengal branch of the monsoon hasn’t made any significant progress when compared to the Arabian Sea branch.

Despite this delay, India is seeing a “good opening” of the summer monsoon season. From June 1 to 5, rainfall in India was 4 per cent more than normal, thanks to a combination of a western disturbance in the north, pre-monsoon showers in the south, monsoon showers in the Andaman and Nicobar Islands and multiple localised thunderstorms in other parts of India.

The monsoon has another 118 days (till September 30) to perform in India. Factors such as the state of El Niño Southern Oscillation, Indian Ocean Dipole and frequency of monsoon depressions will influence its performance.

Monsoon could regain its lost momentum because of a low pressure system in the Arabian Sea. For the onset of the monsoon in Kerala, it’s important for a few atmospheric parameters such as rainfall and wind to achieve threshold values. This low pressure helped build clouds near Kerala which brought widespread rains to the region. Plus, its presence influenced the wind speed and direction and made them favourable. In this way, the low pressure helped pull the monsoon that was stuck over Sri Lanka to southern India. As of the afternoon of June 5, this low pressure system was situated off the west coast of Kerala-Karnataka and had lowest mean sea level pressure of 1004mb.

Initially, multiple weather models showed that this system would intensify into a tropical cyclone and move parallel to the western coast of India. This could have led to a June 2014-like situation of monsoon’s bizarre progress due to Cyclone Nanauk. But as per the present weather model runs, this system would marginally intensify and head almost northwards in a curved path. As of now, the probability of formation of a cyclone like Nanauk is very low. This system would dissipate in the northern Arabian Sea by June 11 and, hence, there is no threat to India.

To some extent, monsoon is expected to progress faster along the west coast as compared to the interior areas of southern India till June 10. In this period, the western coast will witness rainfall with windy weather due to this system. The Arabian Sea will see rough conditions due to the low pressure. It is expected that the monsoon will arrive in more parts of Karnataka, remaining parts of Tamil Nadu and, possibly, southern parts of Andhra Pradesh by June 8. Mostly dry and hot weather will be witnessed in northern India during this period.

IMD downgraded the monsoon forecast, from 93 per cent to 88 per cent, dashing hopes of relief from drought in many parts of India. Thus, the forecast is now of deficient rainfall instead of below normal rainfall. (Note that the error range for these estimates is +/- 4 per cent.)

Likewise, rainfall in north-west India was forecast at 85 per cent of LPA. The observed rainfall was 79 per cent of LPA, but a strong rainfall deficiency was seen in the region. Haryana-Chandigarh-Delhi and western Uttar Pradesh recorded 56 per cent below normal rainfall. This is why IMD’s downgraded forecast