Super food Amaranth: healthy for whom?

People in cities shell out large sums of money for health foods such as Amaranth, little realising that those who grow these super foods don't get to eat it themselves

People in cities shell out large sums of money for health foods such as Amaranth, little realising that those who grow these super foods don't get to eat it themselves 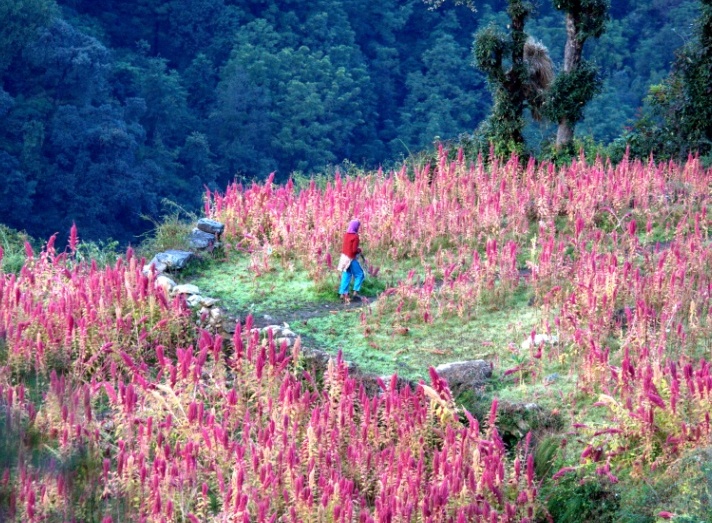 We were in the hills of Uttarakhand last October, on our way to village Agoda in Uttarkashi district to do a bird count in the surrounding areas. We drove till Sangamchatti and then trekked uphill for 6 km to reach Agoda (2,180 metre above sea level). While we see a fascinating variety of avian fauna in the hills, there was something more enchanting to our eyes. An earthy shade of fuchsia that feels like waves of colour bursting through the hills. These deep fuchsia patches in the hills is a result of mature crop of Amaranth (Amaranthus hypochondriacus), best known in north India as ramdana. I was planning to go to some village shop and buy a bagful of Amaranth flour, probably stone milled. I also dreamt of requesting the local people to feed me a home cooked meal of ramdane ki roti (flat bread made from Amarath flour) with gahat ki daal (horsegram stew), rajma (kidney beans) or may be chaulai ka saag (stir fried amaranth leaves).

Meanwhile, I plucked a few “ears” of mature yet moist Amaranth and rubbed it between my palms, the light coloured grains enclosed in the deep pink chaff were sweet and moist. And then I took out the Amaranth bars that I was carrying as a dry snack to nourish myself during the rough trek, it felt like a backward journey of a granola bar that came back to its roots, a grain that has so much nutritive value must be keeping this village quite healthy I assumed.

My assumption was to be trashed very soon.

I was on a high seeing fuchsia fields of Amaranth in all directions, walking besides those fields and watching them grow on the faraway hills, wondering how difficult it must be for the farmers to climb to those fields of fuchsia nourishment. I saw children, women and some men walking with minimal instruments in totes made out of gunny bags, happy faces, torn clothes, pink cheeks and a spring in the step, not necessarily in the same order. They walked up and down the hills, crossed rivers, went on to the next hill before reaching their own fields of Amaranth, a few goats and dogs in tow. I felt a tinge of jealousy seeing the pink cheeks and the spring in their steps while I and my fellow trekkers found ourselves huffing and puffing with our lips parched, stopping by after every half an hour to take a sip of water or a bite of the granola bar.

In the grip of instant noodles

I got talking to a few of the local people while sharing bits of granola bars with them, falling in love with the simple pleasures of life they have. But then I was shocked to see how they have fallen prey to market forces, the junk food traversing to hills and making these hard working people come into the grip of two-minute instant noodles. The roots of my granola bars being leached away by two minute convenience, loaded with gluten and chemical preservatives.

I casually asked them what do they eat once they are in the fields for the whole day. They were carrying packets of two-minute noodles with them and some tea leaves and sugar. They would collect dry wood, make a fire and cook the noodles and have it; later some tea will be brewed in the same pan and they would get some much needed warmth.

The ones who are working hard to grow this wonderfully nutritious grain Amaranth, are not eating it themselves?

When I asked them what all they make out of ramdana, they mentioned popped Amaranth and that they use them to make laddus (sweets) and kheer (pudding). And how they would boil the grain to have it with milk, mill the grains to make flour and make rotis. But the use of Amaranth as a grain or flour has become rare for the hill people. They told me that they lost all the flour mills to floods two years ago and now they cannot grind their own flour. They have to depend on the wheat flour that is supplied to them through the the government public distribution system (PDS) through the year and dropped by helicopters during the rains and floods that happen every year without fail. Also, they sell the Amaranth at a higher cost than they buy their wheat flour, so it is always a better deal to get wheat flour for their own consumption. Add some packets of two-minute noodles and the picture looks bleak as the village residents don't really get enough greens, meat or dairy products. Amaranth would have been a substantial source of nourishment in the tough terrains, along with the rajma and gahat they grow in their own backyards.

I have been buying Amaranth from the Uttarakhand stalls of the India International Trade Fair (IITF) and Krishi mela held at Indian Agricultural Research Institute (IARI) campus and now I feel miserable. It never occurred to me that the people who grew the Amaranth don't get to eat any themselves because they sell all of it to earn a bit more profit. Would you be comfortable buying Amaranth from the health food stores after knowing this?

My grudge is, most of us city folks pay obscene amounts for such health foods and use them as an occasional fancy supplement and not as a replacement of mainstream grains like wheat and rice. We are so used to getting the best produce from all faraway corners that we forget we have a responsibility towards our planet. We need to think about availability of good quality food grains for the people who grow these super foods for us.