The battle for control of our bodies 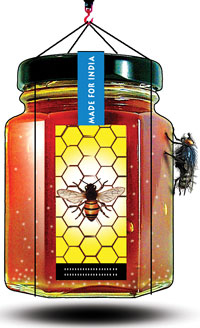 They say you are what you eat. But do we know what we are eating? Do we know who is cooking and serving us the food we take to our kitchens and then into our bodies?

The more I dig into this issue it becomes clear that our world of food is spinning in directions we know nothing about.

Take honey. A sweet preserve we take for granted that it comes from bees, which collect it from the nectar of flowers. We pick up the bottle from a local shop, believing the honey was collected naturally, is fresh and certainly without contaminants. In most cases, we think that small farmers produced it or it was collected from the wild and packaged by large companies. We consume it as a natural tonic against the chemical assaults of the modern world.

But little do we know how the business of honey has changed. Nobody explains us that the culture of food is linked to biodiversity. And this is further connected with the business—and not pleasure of food. But mess with biodiversity and you mess with food. The ubiquitous bee is one such instance. Some decades ago, leading scientific institutions in India sold the idea of introducing the European bee (Apis mellifera) into the country. This prolific honey producer bee took over the business, virtually replacing the humble but more adapted Indian bees (Apis cerana and Apis dorsata) from our food.

At the same time, the business of honey moved away from small producers, collecting honey from the wild and cultivating it in natural conditions. It became a highly organised business, controlled by a handful of companies that handle all aspects of the trade—from the supply of queen bees to the paraphernalia of bee-housing, from feeding and disease control to linking up with producers across different states. It is an outsourced business, run by franchisees whose job is to find places, like the apple farms of Himachal, where there is nectar for bees.

We have lost the biodiversity of the bee—largely Apis mellifera now makes our honey—and we have lost the diversity of the business. Business is now about commerce, not food. But nature has its way of getting back at us. The European bee is showing signs of overuse across the world. In the US and Europe there is worrying news about honeybee colony collapses—bees are disappearing from colonies. This is in turn is hitting crop production as bees play a critical role in pollinating food crops across the US—a service, officially billed at some US$ 20 billion annually. The trade in pollinator bees involves carting bee colonies across the county, where crops need their service. But now there is evidence that such overwork, combined with the use of nasty new pesticides, new diseases and immune-suppressed bees, is destroying bees.

In India, things are no different. The dependence on an introduced species and emphasis on overproduction means the overworked bees are susceptible to diseases. The creatures are immune-suppressed and not adapted to local conditions. So, the answer is to feed bees antibiotics mixed liberally in sugar syrup. The bee makes honey and with it comes the lethal dose of antibiotics.

When the Pollution Monitoring Laboratory of the Centre for Science and Environment (CSE) checked honey, it found cocktail of antibiotics—mostly banned and prohibited in food. It found everything from the commonly used Ampicillin, Enrofloxacin, Ciprofloxacin, Erythromycin to the strictly banned Chloramphenicol in honey made and packaged by the biggest and the most known. Any doctor will tell you these antibiotics in food are bad, because they not only have health impacts but also make disease-causing bacteria resistant to antibiotics. Over-exposure to antibiotics is not just leading to super-bugs in hospitals. We are also getting small doses of antibiotics through food. Because of this doctors want us to be careful with antibiotics. It is also because of this that food regulators say there should be no—or minimum and controlled— antibiotics in our food.

This is where the equation between big businesses and food gets murky. CSE’s laboratory checked two foreign brands bought from our local store. We know Europe has banned Indian honey for having these antibiotics. They did this because they say they care about their health.

Good. But then who cares about our health? Both brands we checked had high levels of antibiotics. The health-conscious companies, in this case from Australia and Switzerland, do not check antibiotics in products they export to our world. It is about double-standards and it stinks. But why should they care for our health, when our government does not? The same government, which makes strict standards for exported honey, does not care about what we use domestically. There are no standards for antibiotics in Indian honey.

This is the age of big and powerful business taking over our kitchen, because we have complicit food regulators. The recently set up Food Safety and Standards Authority has been dead on entry. Do not be surprised. Be angry. This is not a business we should allow for takeover. It is about us. Our bodies. Our self.