The big idea for change: bamboo as grass 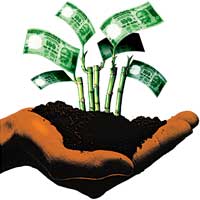 “Stroke of the pen” reform is critical as in many cases policy is dastardly and change is laggardly. The essential element is to find that big-ticket item that can have impact on a scale and at a pace that is needed. I believe Union environment and forests minister Jairam Ramesh’s letter addressed to all chief ministers clarifying that bamboo is indeed a grass and not timber, is such an item.

I have already written about why bamboo should be treated as a grass (see ‘Is bamboo a tree or a grass?’, Down To Earth, December 1-15, 2010). It grows like a weed and because of its high productivity and versatility of uses it has the potential of creating huge economic wealth. So if you can put bamboo in the hands of the people, to grow, to harvest and to add value, you put wealth in their hands.

But policy was reluctant to make this change. The Indian Forest Act had over time categorised bamboo as timber, which meant the forest department had the monopoly over it. Those who grew bamboo in their backyard could not harvest or sell this productive grass without a number of permissions from the forest department.

Today as Anna Hazare’s movement against corruption takes the country by storm, we must make the connection. It is cumbersome policy that creates opportunities for corruption and harassment. It is policy that must be reformed. In this case, ordinary people in villages and in forests got permission to cut their bamboo only after they had greased many palms and fought many battles. In most states a tree owner needs a “transit pass” to cut bamboo. To get the transit pass a tree owner would have to obtain revenue records and then apply to the collector or the forest department for permission to cut. It would take up to 10 different departmental permissions and many visits to “headquarters”. So the way out is to find a well-heeled and connected contractor who can pay his way through the system and facilitate the transaction. In all this, the person who grows the tree gets shortchanged. There is no incentive to use trees or grass as an income-generating activity. Nobody grows trees. The environment loses.

This could change now. Ramesh’s letter makes it clear that the Forest Rights Act has changed the legal regime governing bamboo. This Act, passed in 2006, has “vested the right of ownership, access to collect, use and dispose of minor forest product” (MFP) with tribals and other traditional forest dwellers. It has also defined bamboo as an MFP. The letter asks the chief ministers to direct their forest administration to treat bamboo as MFP and to “respect the rights accrued to communities”.

A lot more will have to be done to ensure bamboo is indeed treated as a grass. Ultimately, it is the change in governance systems that will alter the way we do business with our people and our environment. Anil Agarwal, the founder editor of Down To Earth, had said that unless we promote governance systems based on public participation and transparency we would not get rid of corruption.

It is this governance system that will now have to be worked on so that it facilitates empowerment of people, but checks graft and over-extraction. The minister’s letter takes a bold step in this direction by saying that the gram sabha (village assembly) will have the right to issue transit passes for bamboo grown in forests where community rights have been declared or on private land. We need administrative systems to ensure this permission does not fall into hands that will destroy forests. But all said this is the beginning of a big-ticket reform.

Just consider the potential. The Indian paper industry needs massive quantities of raw material and bamboo is the best pulping material. Over the years, with bamboo defined as timber, industry and forest departments have worked on contractual arrangements to make bamboo and other wood available to industry at throwaway prices. Large parts of forests have been leased to the industry. This has led to deforestation and, in turn, a crippling shortage of raw material for the industry. More importantly, this policy has ended up discounting the value of trees grown by farmers. Our analysis shows India needs 1.5 million hectares of tree-bamboo land to supply raw material to the paper and pulp industry.

Now industry can source this from small landholders or villagers with community forest rights. It will have to pay the market value, which will increase its cost of raw material marginally. But at the same time, this buyer-seller relationship will put money directly in the hands of people, reducing need for development assistance, which also comes at a high transactional cost. Growing trees can be a business for growth.

I call this big-ticket because this single move can rid economies of the growth-without-jobs syndrome. This is the new green growth model the world is desperately seeking—creating opportunities to build economic wealth from regeneration of forests, and more importantly, creating inclusive and equitable wealth and wellbeing.

Bamboo in the forest and in the hands of people is about that big reform for a green tomorrow. Let’s hope we grab the potential.