The fall of the golden spice

In mid-16th century, Abul Fazl, visited Kashmir. Fazl was a formidable administrator, a historiographer and one of the nine gems at Mughal emperor Akbar's court. But he wasn't exactly known as an aesthete. Fazl was, however, moved by the beauty of saffron fields in Kashmir. In the Ain-i-Akbari he notes that the fields created a panorama that could please the most grumpy. A few decades later Akbar's son, Jahangir--a great aesthete--wrote about the ethereal quality of the breeze from saffron fields in his autobiography, Tuzk-e-Jahangiri.

Called Kangposh in Kashmiri, the flower has moved poets, emperors, scholars and even ascetics. It's so inextricably linked with Kashmir, that it's difficult to believe saffron is not native to the state. Food historian K T Achaya writes that the spice originated in Asia Minor and Greece.

Some historians suggest that Persian saffron corms were transplanted to Kashmiri soil after Persia conquered Kashmir. The first harvest then occurred sometime prior to 500 BC. In the 6th century BC Phoenicians began to market the new Kashmiri saffron by utilizng their extensive trade routes.

A Kashmiri legend, however, dates it much later. It states saffron first arrived during the 11th century, when two itinerant Sufis, Khwaja Masood Wali and Hazrat Sheikh Shariffudin, wandered into Kashmir. The foreigners, having fallen sick, requested a cure for illness from a local tribal chieftain. When the chieftain obliged, the grateful holy men gave him a saffron bulb.

To this day, prayers are offered to the two saints during the saffron harvesting season in late autumn. A golden-domed shrine and tomb are dedicated to the saints in the saffron-growing village of Pampore. 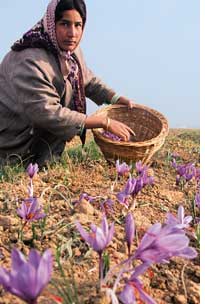 One wonders when saffron became highly valued in Ayurveda? It is recommended for a variety of diseases including acne, arthritis, asthma, colic, cough, dyspepsia, liver and spleen disorders and sore throat.

Saffron is the favourite spice for several traditional dishes in Kashmir. As a condiment, saffron is a stimulant and has a warming effect. The legendary kehwa does not become tasty till it is laced with the aroma and tint of saffron. Addition of saffron imparts a lasting flavour to sweet dishes.

The golden spice, however, has started to lose its lustre in Pampore. Yields have come down from 2.5 kg per hectare (ha) to less than a kg per ha. More than 5,000 ha in the valley was under saffron crop during the 1980s. The area under cultivation has now reduced to 3,000 ha.

Change of climate is a major factor in reducing saffron yields. Saffron is a rainfed crop. It requires rainfall in spring and winter. Rains have not been timely for the past five years. So saffron growers are shifting to other crops, apple for example.

Saffron production in 2007-2008 was 40 per cent of the yield in 2006-2007. Many saffron growers, particularly those in Pampore, have harmed their source of prosperity by undertaking construction activity where fields once stood--of course factories and the real estate business have played their role as well.

The quality of the saffron crop derives from the bulb. Bigger the corm, more the saffron flowers. However, many farmers looking for quick profits dig out the corms before these bulbs mature.

Diseases and pests have compounded the problem.

R D Gupta is an agricultural scientist. He was faculty member at the Sher-e-Kashmir Agricultural University and Technology, Jammu