Is there an alternative to guinea pigs in laboratory testing? Two members of the scientific community give their views 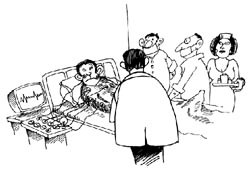 k satyanarayana
the forcible release of 52 monkeys from the National Institute of Nutrition ( nin ), Hyderabad, into a forest by activists led by a Blue Cross functionary, Amala Akkeneni, has once again brought into sharp focus the bad blood between researchers and animal rights activists. The research has suffered a setback by about a year.

The release was ordered by the member-secretary of the Committee for the Purpose of Control and Supervision of Experiments on Animals ( cpcsea ) on the grounds that nin had failed to register itself with the cpcsea and the institute was not taking proper care of the animals. nin was doing some safety testing of alpha interferon - an indigenous anti-cancer compound - on monkeys for a Hyderabad-based drug company.

The cpcsea derives its authority from section 15 of the Prevention of Cruelty to Animals Act (1960). Under this act, the scientific community has progressively developed a system that addresses the welfare of the animals without affecting research. Maneka Gandhi, as chairperson of the cpcsea, commissioned several ngo s in 1997-98 to inspect about 5,000 laboratories experimenting on over 5 million animals every year.

This report accused scientists of, among other things, conducting insane and redundant research besides performing unnecessary experiments with the express purpose of producing papers to further their careers. The report recommended several steps such as a ban on testing cosmetic substances on animals; reduction in the number of animals being dissected in educational institutions; restrictions on testing variants of drugs that are already available, mandatory provision of anaesthesia and analgesia; advance notification of details of experiments to the cpcsea for a review of their importance and random checks to avoid repetition of experiments.

New guidelines were issued in September 1998. The Breeding of and Experiments on Animals (Control and Supervision) or bea R ules notified by the cpcsea broadly covered all areas of animal experimentation such as their breeding, stocking and experimentation, registration of establishments supplying and using them, permission for conducting experiments, the conditions under which experiments have to be conducted etc. The Gazette notification was issued despite strong objections from the cpcsea members.

The scientific community reacted strongly saying some of the provisions were considered 'unrealistic' and 'impractical'. This led to the constitution of a high-power committee under P K Dave, director of the All-India Institute of Medical Sciences, New Delhi. But some of the recommendations of the committee were not incorporated in the final notification.

In June this year, the cpcsea directed nin to release about 30,000 animals including mice, rats, hamsters, guinea pigs, rabbits and monkeys housed in the National Centre for Laboratory Animal Science, Hyderabad, a department of bio-technology - funded national facility at the nin. When the nin refused on the grounds that it has already sought registration and maintained that it did not flout any rules, animal activists marched in with the police and took away the monkeys to be released in a forest. This led the scientists to appeal for the prime minister's intervention. The prime minister's office has just constituted another committee under noted neurosurgeon P N Tandon to have a fresh look at the bea guidelines. The committee has already submitted its report to the pm .

The issue that deserves attention is whether it is possible or even feasible to exclude animal use from laboratory experiments. Complete elimination seems highly unlikely in the near future. But there have been serious efforts globally towards its reduction since the 1970s.

Only a discussion between both the groups in a climate of mutual trust can help find a solution acceptable to both. So far, it appears that there has been no such meeting. There are deficiencies in animalcare which that even scientists admit should be addressed. Scientists need to understand that on any ethical issue societal inputs must and should be taken. The Institutional Animal Care and Use Committee (iacuc) mechanism in laboratories should be strengthened. Animal activists, on their part, need to keep an open mind and not insist upon imposing impractical and unworkable set of rules that are detrimental to the progress of science.

The author is a scientist with the Indian Council of Medical Research, New Delhi. The opinions expressed are his own and not of the council

Saumitra Bharadwaj
the philosophy of prevention of cruelty to animals has been the central theme of many societies and cultures around the globe. The issue of discontinuing the use of animals for testing by various research institutes and pharmaceutical firms is thus a continuation of the same tradition.

Recently, it was reported that an animal rights organisation freed a number of animals which were earmarked for research. It is high time to address this problem in its totality. Does our responsibility end with an occasional act of emotional hysteria? We also have a responsibility to prevent cruelty to animals which are housed in slaughterhouses and those owned by companies that are involved in animal husbandry and selling of animal products.

Another community which has taken a lot of flak on the issue is the scientific community. But we must look at the role of the scientific community in a different light. It is unreasonable to regard all the scientist all cold-blooded, insensitive people. We should not forget the great contribution that scientists have made for the betterment of life on this planet. The information gained from the various scientific experiments not only go a long way in serving the needs of humans but also animals. For example, the antibiotics produced in the labs are also used for the treatment of various diseases in animals.

A question we are faced with is how to discover, invent and promote products for the betterment of all without the use of animals. It is not possible to develop a software which simulates various in-vivo conditions as we have in some other branches of science.

In order to protect people's lives, the rules regulating the introduction of various medical products are very stringent and in some cases even harsh. During trials a drug has to pass numerous stages of scrutiny before it is finally approved for use. After getting the initial permission, the drug is developed and tried on lab animals and the results studied. Then the therapeutic dose required, LD 50 (lethal dose which kills 50 per cent of the test animals), the carcinogenic profile and adverse fatal effects are closely monitored. It is only after this that the drugs are approved and tried on human volunteers. In rare cases only drugs not approved may be used for treating patients not responding to existing treatments. The effects of the drug are then statistically analysed. Even after the drugs are introduced in the market they are monitored by the postmarketing surveillance department. All this takes many years.

The benefits of animal use in research are enormous and we will have to continue doing so till we find an alternative. Progress in science has let scientists discover the causes of diseases whose origins were earlier unknown. As life expectancy increases, new long-term manifestations of diseases like diabetes are appearing. How are we going to find cures for aids , cancer, Alzheimer's disease? How are we going to develop vaccines for diseases like leprosy?

Today, it is of utmost importance to monitor the use of animals for research. The agencies - governmental and non-governmental - should scrutinise the justification of these requirements and their ecological impacts. They should make sure that no armtwisting is done by governments just to get their orders passed. They should ask for submission of periodic reports from the labs on the progress of the various research projects and then evaluate their validity. They should also inspect the labs to ensure standards are met. The scientist have to be trained in the understanding of animal behaviour and husbandry. It is of utmost importance that high levels of ethical and moral values be maintained.

The medical fraternity should also play a constructive role. The discovery of alternative methods for research should be high on the agenda. A case in point is the production of vaccines in Human Cell Series which not only produce better vaccines but do not involve the use of animals, all the while minimising the chances of adverse effects. Animal rights should be constitutional rights as animals too have a right to this planet. These rights are supposed to be respected by not only the people working in the laboratory but also by the common person and other professionals involved with animals in various ways.

People could contribute to the cause by joining the various animal rights organisations so that the message can be propagated properly. They should also empower these organisations sufficiently to influence governmental policy.

The author is a medical practitioner based in Delhi