The US and us 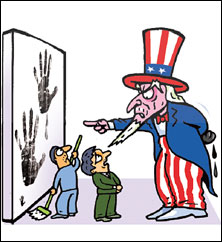 Visiting the US, one thing came home to me: the country has very little political will to cut greenhouse gas emissions. Policy makers and media professionals talk about the climate change crisis.

But any opinion on cutting emissions, based on historical or even current responsibility, is just dismissed. The public perception, seemingly carefully nurtured, is it is runaway pollution in China and India that will devastate the world.

Indeed, talk about serious action by the US is hushed up, for it will play into the hands of the Republicans. You are then sternly reminded President Barack Obama is better than his predecessor, George Bush, on climate change. In other words, it is the responsibility of the world to now support his weak and meaningless actions. Else, the likes of Bush will be back.

Talk about being held to ransom. Which is why the climate-concerned world must ask: what is the price it will have to pay to bring the US on board? What, if any, price will be enough?

Currently, just to bring the reluctant US on board, the world is being asked to agree on the Copenhagen Accord, literally a polluter’s manual. With no targets for industrialized countries to cut emissions, it seriously undermines the world’s fight against climate change. Under the Accord, how much each country must reduce its emissions by is not based on historical and current emissions.

It is self-chosen, voluntary; never mind if it adds up to nothing. The US has offered some 3 per cent reduction below what it emitted in 1990; what is required of it is 40 per cent below 1990. Aggregate all current pledges and the world is on course for at least 3°C rise in temperature, says the UN itself.

Yet, believes US chief climate negotiator Todd Stern, the accord is really clever: “you cannot underestimate the importance of a breach in the firewall between developed and developing countries”. The “breach” is that India, China and all others have to ‘pledge’ what they will do to cut emissions (although in a separate schedule). Everyone is now part of the global deal to cut emissions.

In itself, not a bad idea. But the fact is our entry facilitates a process to wipe out the principle that action must be taken on the basis of equity—country targets apportioned on the basis of historical and current contributions. The accord, if it becomes the framework for future negotiations, will simply overwrite the principle of equity in burden sharing.

Already the burden of transition has shifted. The UN’s own estimate is that, based on the stated pledges of different countries, developing countries will cut double what Annex 1 countries will by 2020.

The move implies once past responsibility is erased, industrialized nations will have no obligation to pay for the transition in the developing world or provide technology in favourable terms. But, remember, the climate treaty is predicated on the very fact that, for future action, the polluter must pay. No surprise, then, that Todd Stern has made it amply clear there is no way his country will ever pay a transition penny to the likes of China or India.

Bluntly, the Copenhagen Accord divides the world into ‘polluters’ and ‘beggars’. China, India, South Africa, Brazil and the like are being promised the right to pollute if they legitimize the right of the US and the rest to pollute. The rest of the world, apparently hungry for money, is promised funds for compliance.

Remember how, the last night in CoP-15, the US and UK openly told the Maldives and Bangladesh they would not get money if the accord was not operationalized because of intransigent developing countries. In all this, it’s downright criminal there is just no clarity where this money will come, and when. Fictional money, riding on a dishonest bribe.

But let’s return to the US. Will this strategy work? Has the world stooped low enough?

Not enough, I suspect. Last week, the Democratic party lost a crucial seat—Ted Kennedy’s constituency of Massachusetts—to the Republican party. With this, they lost their majority in the house. There’s more excuse to do less.

Already, talk (in the power-media corridors) goes that the present Boxer-Kerry-bill, which sets out these weak targets, will not go through the Senate. It is even said the bill, being recast as an energy-efficiency law, will be even weaker (if that is possible) than what’s on the table.

In short, the world will have destroyed its blueprint for effective action on climate change, all for the US, which will still renege and ask for even more. This is not new. In 1992 (the climate treaty), 1997 (the Kyoto Protocol) and 2007 (the Bali Action Plan) all ambitions were whittled down, stuffed with loopholes and made inconsequential, all to suit the US. Still, the US walked out.

How low will the race to the bottom take us now?

The news is not good. For instance, the US government has written to the World Bank it must not fund coal-based power stations in the developing world. Based on these ‘instructions’ the first such project, in Pakistan, has been cancelled. But the US goes ahead with its plants.

So how will the world deal with the US? That is the zillion-dollar climate question.