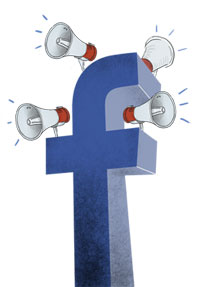 A casual google search with the key words “social media”, “impact” and “development news” shows up close to 183 million results. It is not humanly possible to verify all the results, but it gives a peep into how big the virtual world is and how vigorously people are sharing content. We are certainly making a transition from a “searching” to a “dissemination” mode in the virtual world. And the social media has emerged as the clear driver of this transition. This is particularly true for development news.

The social media is unique as it is highly informal, yet, is the most organised congregation of people. Users are immediately organised based on their choices, trends they are following, and also by their geographical locations. This is what is fuelling the rise of the social media as a powerful platform – for dissemination as well as the organisation of opinion around social issues.

Whether it is about a small movement to save a patch of forest in Peru or a jalsamadhi campaign against a big dam project in a remote district in India, the social media is not only the first place to break news, but is also a powerful platform to build a campaign. For a journalist like me, it has become almost a necessity to refer to Facebook as frequently as to television channels that supposedly break news first! It is the new common pool resource that is being aggressively pursued.

But the social media has its share of problems that may impact the very cause it is promoting. Firstly, it has emerged as the biggest strategic decision that has yielded results in terms of achieving fast dissemination and seeking immediate reactions for a social cause. This means that even before an issue emerges in its entirety, it is open for public opinions. Secondly, many campaigns around development issues are exclusively targeted at the social media. There may be logical reasons for this, but the strategy seems to be dominantly focused on certain sections of the society that use it. The threat is that by default, the social media has become a polarising factor, even though most debates are not well informed. It has become a free space to throw personal biases and park opinions without any restraint. Therefore, any cause disseminated in the social media immediately polarises the debate. This is particularly true for campaigns having political overtones.

Take the case of the recent debate over the new land acquisition bill that attempts to dilute community rights over land acquisitions for public purposes. The social media played a decisive role in generating the perception that the government is “anti-farmer” or “pro-business”. But in the passionate debates that colonised the virtual world, the debate simply got polarised into “pro and anti-government rhetoric”. Such situations have forced political parties to deploy substantial resources to intervene in such debates.

The third threat is from the social media itself: will it disconnect the people and the groups from those self-mandated to fight the battle on their behalf? If there is a disconnect, then the strategic leadership of a campaign shifts to the latter. This is not an ideal situation for public advocacy where the subject concerned doesn’t get active participation. Development campaigns in India involve people who are very poor, and least advantaged in terms of access to communication. A mobile phone might have become a bigger necessity than a toilet in rural areas, but this doesn’t mean that the instrument is being used to directly involve them in campaigns that talk about them.

Researchers are currently studying the impact of the social media on social causes. Though the trends are positive in terms of garnering attention for such causes, we are not sure whether it has impacted positively on the outcome of the campaigns. Meanwhile, we should continue to “reset” the virtual world, but with caution.