An every monsoon affair: How to tackle urban flooding

Urbanisation is inevitable as is climate change; the need is for a multi-pronged approach

As the monsoon hit cities, citizens were reminded of the mayhem that usually surrounds urban India around this time, where roads become canals, even if there is moderate rain.

Waterlogging — a prelude to urban flooding — is a common sight in urban India during the monsoon. Urban flooding has also become increasingly common, as the changing weather pattern resulted in more high intensity rain in fewer rain days.

The novel coronavirus disease (COVID-19) increased the problem of waterlogging as pre-monsoon desilting of drains was not carried out in full capacity.

There were several incidences of pluvial flooding in urban areas across India over the past decade. Some of these were a consequence of incessant rain over a day, for example, in Chennai and Mumbai in 2015 and 2005 respectively.

Others were a consequence of high-intensity bursts of downpour for three to six hours, suddenly overwhelming drainage systems. The trend of urban flooding and waterlogging has continued in urban India this year too.

July was the wettest month for Mumbai, which received 819 millimetres of rainfall on an average.

The city, however, received 675 mm of rain in the first five days of the month, with 427 mm on July 4, 2020, according to a report by international news channel Al Jazeera. This resulted in widespread flooding of roads and buildings in the city, with motorists wading through knee-deep water.

The National Capital Territory of Delhi received 74.8 mm of rainfall (recorded at Safdarjung) overnight on July 19, said a report by The Hindu newspaper. This resulted in widespread waterlogging in the city.

The downpour resulted in one person losing his life. Apart from that, all major junctions of the city were waterlogged. The city reported over 36 incidences of waterlogging and 14 instances of trees falling.

In addition, more than 10 instances of damage to buildings were reported, according to The Hindu. This included the collapse of over 10 houses in an informal settlement near Delhi’s ITO area.

Like Delhi, neighbouring Gurugram in Haryana was waterlogged with a 22-36 mm downpour recorded July 22 in some of the district’s weather stations, reported The Hindu.

Several parts of the city were waterlogged, with residents pointing this out on social media.

While these incidents were covered in the mainstream media, they were not isolated incidents: Most urban areas grapple with waterlogging and urban flooding every monsoon.

Context of urbanisation and climate change

It is important to note urbanisation is an inevitable process and urban areas will continue to grow demographically and spatially.

Cities — considered engines of growth — contribute more than 65 per cent of the national gross domestic product and provide employment to more than a third of the country.

The collateral damage emerging out of these expanding cities is the result of a breakdown in natural systems.

Urban areas, however, generate high volumes of polluted run-off, often resulting in the breakdown of the urban drainage system. In such a case, even moderate rainfall events can lead to flash floods in low-lying areas and can overwhelm drainage systems of cities.

It is evident that our weather patterns are altered because of global warming. There is evidence of change in some climate extremes based on data gathered from 1950, according to the Inter-governmental Panel for Climate Change (IPCC).

In terms of precipitation, it is likely there were statistically significant increases in the number of heavy precipitation events, according to the IPCC.

Projections revealed a significant increase in mean monsoon precipitation of eight per cent and a possible extension of the monsoon period.

Extreme excess and deficient monsoons are projected to intensify, according to a 2006 study published in ResearchGate. In the future, high intensity rain over a few rain days is expected to become normal. 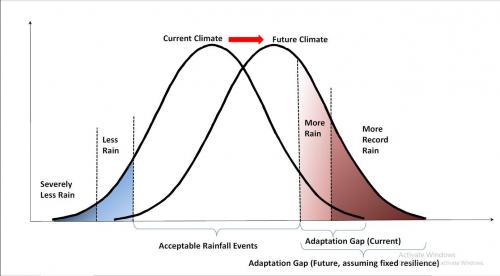 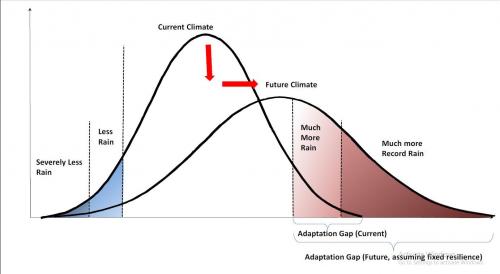 Deficiencies need to be identified under several structural and non-structural dimensions related to urban stormwater management.

Cities were not planned keeping in mind stormwater management. In most cases, development control regulations in master plans do not provide for run-off control measures. 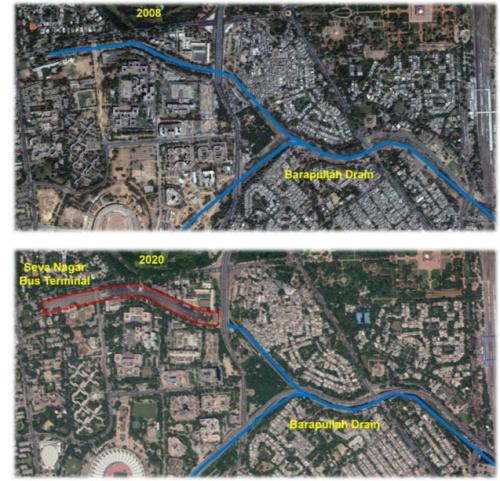 While the current response to urban flooding is limited to the construction of roadside drains, design standards recommended by the Central Public Health and Environmental Engineering Organisation (CPHEEO) are outdated.

While CPHEEO standards recommend a design according to one or two-year flood levels, drains are not able to accommodate increased run-offs because of more frequent high-intensity rain.

Stormwater drains in cities are generally in poor conditions, with operation and maintenance largely inadequate and ineffective.

Stormwater drains are often choked with municipal solid waste and construction and demolition waste. One such example is the choked drain in south Delhi’s Taimoor Nagar area, where garbage has piled up over the years.

In terms of non-structural deficiencies, there are no national / state level policy frameworks and / or guidelines for urban stormwater management in India.

Urban infrastructure development missions — including the Smart Cities Mission, the Swachh Bharat Mission and Atal Mission for Rejuvenation and Urban Transformation — fail to provide a comprehensive vision and strategy to address issues of urban flooding.

Several cities in India have attempted to address issues regarding urban stormwater management.

The Chennai Flood Warning System — that provides spatial flood warnings for the city — was launched in October 2019.

These systems help build resilience and can inform the public and authorities regarding risks. The India Meteorological Department launched the Mausam mobile application that provides rain forecasts including warnings.

The Karnataka government launched the Meghasandesha mobile application, which provides real-time rainfall measurements, along with forecasts for rain, flooding and thunderstorms for capital city Bengaluru.

Delhi has prepared several multi-dimensional strategies to address the issues of urban flooding. The city was the first to have a drainage master plan, prepared by the Indian Institute of Technology, Delhi.

The Delhi Jal Board also took up the revival of 159 water bodies in the city, along with floodwater harvesting projects in the floodplains of Yamuna. All these measures have multiple economic, environmental, social and urban benefits for the citizens of Delhi.

The Odisha government’s housing and urban development department issued an advisory for implementing rainwater harvesting in public parks and open spaces in urban areas across the state.

While these measures look good on paper, they must be followed through by effective implementation, taking operation and maintenance and coordination with stakeholders including architects, planners, hydrologists, groundwater experts, etc, into account.

These strategies must be prepared and implemented with the support and contribution of and the local community.

A systemic change — which comprehensively resolves structural and non-structural issues — is required to address issues of urban flooding. Some of these recommendations are summarised below: