COVID-19: 4 factors to test how vulnerable slums in 4 big cities are

Govt of India thinks novel coronavirus will be a part of life. That makes it imperative to account for limitations before forming policy

The 2011 Census estimated that 66 million Indians lived in slums — 5.4 per cent of the country’s population and 17.4 per cent of its urban population. A multitude of factors make the informal settlements more susceptible to the novel coronavirus disease (COVID-19).

Residents of urban slums are at significant risk of contracting the SARS-CoV-2 virus that causes the COVID-19 disease. Fundamental environmental conditions that foment the contraction and transmission of COVID-19 include:

To add fuel to the fire, overcrowding in slums makes social-distancing and self-quarantine unrealistic.

The government has accepted that surviving with the virus may become a way of life. It is, thus, imperative to account for these limitations before any policy action is formulated for tackling COVID-19 in such settlements.

About 45 per cent of currently active cases (June 16, 2020) were reported from three cities: Chennai, Delhi and Mumbai contributed around 10, 17 and 18 per cent respectively to the active case burden in the country.

In terms of overall confirmed cases, Mumbai reported more cases and deaths than the other two put together. Chennai’s burden of cases proportionate to its population was higher than that of Delhi.

Another mega city sitting on a time-bomb is Kolkata. With a frail healthcare system and burgeoning disease burden, it is only a matter of time before the city’s healthcare systems spiral to a complete collapse.

A considerable proportion of both slum and non-slum households have access to soap and water for washing hands. This proportion is, however, comparatively lower for slum households. The lowest proportion was in Chennai, followed by Kolkata.

These indicators clearly suggest there is hardly any space in settlements for social-distancing. The conditions of slum inhabitants is worse compared to their non-slum counterparts: This factor makes them highly vulnerable to contracting the virus. 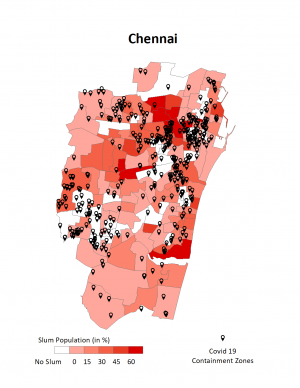 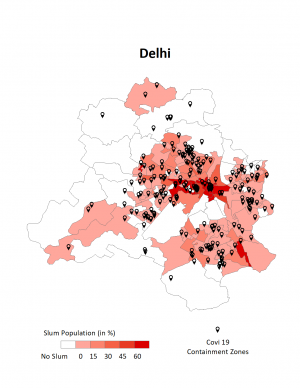 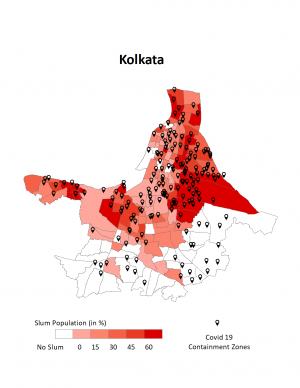 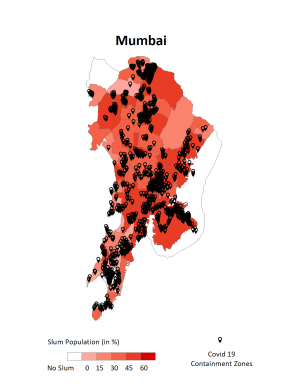 Source: Census of India and municipal corporations of respective cities

A prima-facie view of the bivariate choropleth maps showing the share of slum population across wards in the megacities and the location of COVID-19 containment zones revealed the concentration of slums was the most in Mumbai, followed by Kolkata and Chennai.

When the containment zones in the maps are reviewed with scrutiny, it is observed that — with the exception of Chennai — they are heavily concentrated in areas with a higher concentration of slums.

It is also evident that the greatest number of containment zones were in Mumbai, underpinning the fact that slums are prone to being exposed by the virus. Any measure to tackle the outbreak without close attention to culpable factors in these informal settlements will not yield benign results.

The projected confirmed caseloads in the cities using auto regressive integrated moving average modelling indicate that while the number of confirmed cases would increase at a snail’s pace in Kolkata, cases in the other three cities would increase by leaps and bounds, with the rate of increase being the fastest for Mumbai, followed by Delhi.

This projection, again, points to the fact that the concentration of slums has a momentous impact on the number of COVID-19 cases.

India is home to over 50,000 slums, of which 70 per cent are concentrated in Andhra Pradesh, Gujarat, Maharashtra, Tamil Nadu and West Bengal, according to a UNICEF report with the theme “Children in Urban World”.

The current pandemic accentuates the fact that the slum population is the most vulnerable population and thus, provides the most apposite conditions for the genesis and proliferation of maladies, the situation being more perilous in the case of communicable diseases.

The current pandemic demands a holistic approach to issues faced by the slum population and an increase in the testing rate as well.

This will not just aid in identifying COVID-19 cases, but also prevent spread in adjoining non-slum areas.

An example can be taken from Mumbai’s Dharavi, that went from being a coronavirus hotspot to a model for other developing nations grappling with the pandemic.

Its chase-the-virus technique not only reduced the number of new cases and recovery rate massively, but also curtailed mortality. Dharavi is also the best example of how working with the community can lead to better strategic management of any issue.

It is noteworthy that for the urban poor, a massive chunk of those who reside in informal settlements, it is incredibly difficult to follow norms of social-distancing due to space constraints and several other problems. In addition to this, the people are extremely vulnerable as far as their economic and food security is concerned.

It is, thus, not only imperative to focus on the amelioration of testing and screening facilities, but also impart importance to food and income security of the vulnerable population in informal settlements.

Views expressed are the authors' own and don't necessarily reflect those of Down To Earth.