Due to a multiplicity of authorities, the stormwater infrastructure in the city is largely unequipped to handle moderate or extreme rainfall events 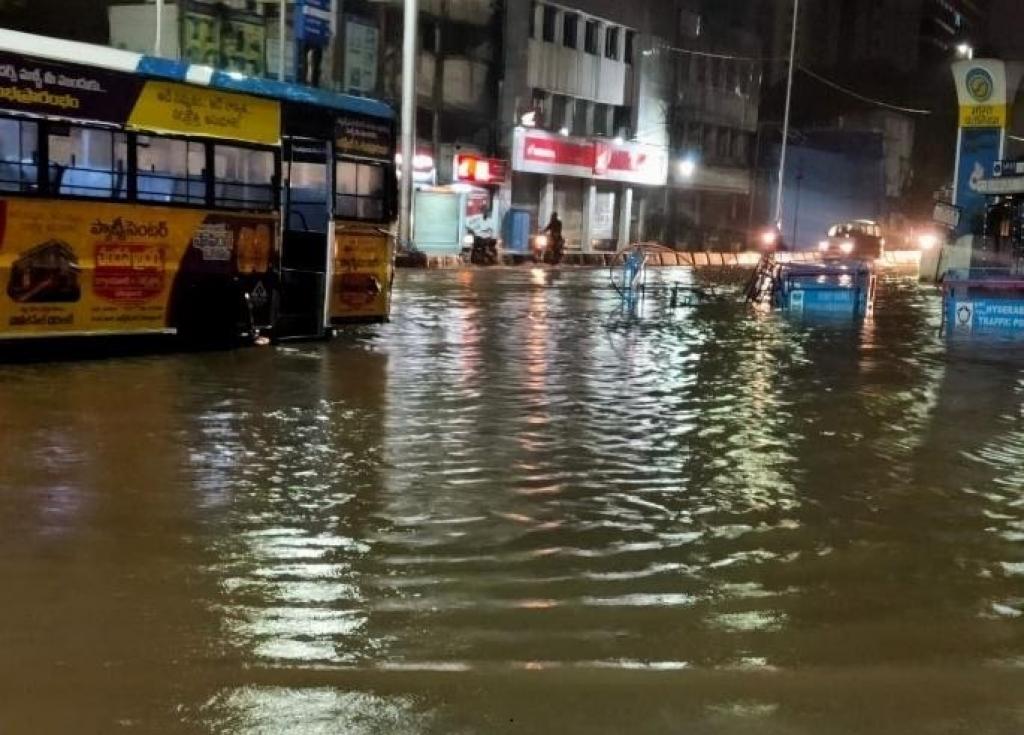 Hyderbad is one of the fastest-growing urban agglomerations in India with an annual population growth rate of more than 5 per cent. But the city has suffered endlessly from floods.

In one of its worst spells in August 2008, the city received 237 millimetres of rainfall — 28 per cent of annual rainfall — in over 72 hours. It affected more than two lakh people. Property damages in the city alone were estimated to be Rs 50 lakh.

On September 21-22, 2016, the city received 166 mm of rainfall, submerging roads and properties in the low-lying areas.

In the most recent spell, on October 17-18, 2020, the city recorded rainfall in excess of 200 mm overnight, resulting in a flurry of run-off that submerged the entire city. More than 76 people have died; damages have been pegged at Rs 1,000 crore.

It is evident that the annual rainfall has been increasing with time and is likely to result in more instances of urban flooding.

While the city grapples with urban floods frequently in a changing climate, the response to prevent urban floods remains toothless: The strategies are limited to provisioning of more drainage channels.

Hyderabad is located on the ridge of the Krishna and Godavari river basins, approximately 150 kilometres away. With the undulating hilly topography of the Deccan region, Hyderabad and its environs were dotted with a number of natural water bodies such as lakes and tanks.

A number of small tanks were also built by the zamindars during these times. Historically, the city comprised 400 lakes. At least 48 flood absorbing tanks were built as part of a stormwater system in 1912-1929.

These water bodies provided cushions to absorb and store rainwater. Most of them have been converted into housing colonies by reclamation, according to Agarwal, A and Narain, S, 1999 (Dying Wisdom).

Currently, only 169 lakes exist in the city. Several water channels that used to carry floodwaters from one lake to the next in a catchment area have also been encroached by private and government agencies.

Increase in built-up area in Hyderabad, 1990 - 2014. Source: Retrieved from Atlas of Urban Expansion

The existing urban stormwater management in the city is largely based on conventional approaches implemented in developed countries during the 20th century, which aimed to evacuate the run-off from the city as quickly as possible instead of endeavouring to store and reuse it.

This means constructing more and more grey infrastructure constituting road-side drains. Here, the design standard accounts for three-five years return period run-off. The service-level benchmarks (SLBs) focus on only on construction or retrofit of these road side drains for stormwater management.

However, this approach alone is limited in its ability to account for uncertainties in climate projections as well as to manage precipitation events that are more extreme than considered in design standards.

The road-side drainage infrastructure in the city is under multiple authorities: The Greater Hyderabad Municipal Corporation (GHMC), the Public Works Department (PWD) and the Hyderabad Metropolitan Development Authority (HMDA) are the major players.

In addition to these, the natural drains in the city and the extended metropolitan areas are under the Telangana Irrigation and CAD department. Desilting exercises are also carried out by GHMC in some natural drains.

A majority of lakes in the city are under GHMC and HMDA, whereas their catchment areas are under multiple public and private ownerships.

Due to multiplicity of authorities, there are issues of coordination and lack of enforcement, and the stormwater infrastructure is largely unequipped to handle moderate and extreme rainfall events.

To address urban issues of the 21st century, we need to look beyond the Victorian engineering solutions and adopt new perspectives.

There is a need to push for alternative stormwater management techniques that can lead to a sustainable groundwater infiltration, protect local water bodies as well as avoid urban flooding in the long run. This amounts to lowering hydrological impact of urbanisation and increasing the carrying capacity of urban areas.

The city has 1,017 parks and playgrounds spanning 281 hectares that provide potential for moderating run-off through principles of retention. They also help in recharging groundwater through infiltration.

These strategies should also address issues of integration of urban drainage with other urban services and urban planning with regular observations and management.

Risk and vulnerability assessment is as an essential part of the stormwater masterplan, which will inform regarding the following:

Alternative and additional measures (storage / infiltration / delayed surface run-off) remain relatively unused in the city. These techniques help to reduce not only flood events and the creation of stagnant ponds but also the volume of contaminated water discharged into the environment.

This important information about preserving natural features such as water bodies and watershed areas should be supported with a list of evaluated alternatives such as using traditional drainage channels (gray) infrastructure versus more efficient and economic low-impact (green) infrastructure.

As the city expands, areas must be planned and developed on the principles of water-sensitive design and planning, that is, parks and open spaces should be planned and designed for infiltration.

Nothing is possible without collaboration to develop the required linkages between different expertise. The specialists and stakeholders need to harmonise stormwater management related activities.