Vedanta and lessons in conservation 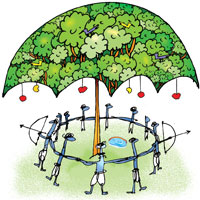 The Forest Rights Act of 2006—also known as the Scheduled Tribes and Other Traditional Forest Dwellers (Recognition of Forest Rights) Act—came after considerable and bitter opposition from conservation groups.

They said the Act, which would grant land rights to tribals and other forest dwellers, would destroy forests and wipe out wildlife. Worse, the rights would make it easy for developers to take over forests. In other words, acknowledging the right of people over their forest was a bad idea.

The recent Vedanta decision—to reject clearance to the multinational company's bauxite mining project in Orissa—must be viewed in the light of this opposition. The Union Ministry of Environment and Forests' panel, chaired by former bureaucrat N C Saxena, has indicted the state government for its non-adherence to the Act. It found the Act, which stipulated that the rights of tribals be settled before clearing any project, was followed only in the breach. More importantly, the Act says the forest-dwelling communities must give their consent through the gram sabha before a project is cleared. The Saxena committee says this was not done. Worse, it found the state government tried to cover up its negligence. The bottom line is that people living where mining is proposed are against the project. They were not heard.

It is for this reason (and for Vedanta's non-complian ce with environmental laws) that the ministry took what is clearly a tough decision against the powerful company.

As we celebrate the decision favouring environmental justice over destructive development, we must stop and ask: have we really understood green concern in this poor country of ours? In the 1970s, when the environmental movement took root in the country, it had two distinct streams. One was a movement to conserve wildlife. The 1970s saw the beginning of tiger conservation in the country. With this grew the conservation movement, aiming to secure habitats for animals but failing to safeguard the needs and rights of people who lived there.

In the same decade was born the Chipko movement— women in the Himalaya stepped in to protect their trees from wood cutters. But their move was not to conserve trees; they wanted the rights to cut trees. They also said— but few heard them—they would not cut the trees because the forest was the basis of their survival. They knew the value of the environment.

I believe the reason we followed the Western model was we did not trust the poor in the country with protecting the environment. Even when it came to afforesting the land people and their animals used, or regenerating the water bodies in villages, we trusted officials over people. The policy kept people out of their forests, made them trespassers in their own land, denied them their rights and their choice for development.

But today, the modern Indian environmental movement should stand humbled. It is the activism of the same people we middle-class environmentalists distrusted that has defeated one of the world's most powerful companies, Veda nta. This is the environmentalism of the very poor. Their activism is driven by the need for survival. They know their livelihood depends on natural resources, the land, the fore sts and the water. They also know that extractive and resource-capital intensive development is not inclusive of their needs. They are poor and will be poorer once the mine is dug or the forest is cut. It is for this reason they have fought relentlessly against Vedanta. Let us be clear, this is not a movement of the city-bred green lobby. This is a movement of a tribe of Primitive forest dwellers who worship the Niyamgiri hill. It is their belief in their culture that made them fight.

The question I have is whether their victory will change beliefs. Will we learn the development lesson—to create a model of growth and conservation that uses people as a resource for local development?

It is important to understand that green actions that drive people out of forests are today roughly equal to the assault by the development lobby that takes away their resources. On the one hand, development needs their land, their water and their forests. On the other hand, conservation wants to throw them out of their land and forests. India's forest policy, for instance, has been broadly driven by two imperatives: to extract the resource for industry or to conserve the resource for wild animals. In all this, people have increasingly nowhere to go. This is why India is seeing more anger against wild animals, more violence in forests and more destruction of habitats.

It is time we trusted people. If and when we do, the victory over Vedanta (and others like it) will be complete. Only then.