COVID-19: Can wastewater help in tracking outbreak in India

More than five million people across the world and 140,000 people in India were affected by the novel coronavirus disease (COVID-19) as of May 25, 2020. One thing is clear that COVID-19 is not going anywhere soon.

The nationwide lockdown to curb the spread of the disease was supposed to help governments become better prepared for handling the peak in the infected cases.

As enveloped coronaviruses are thought to be primarily spread via person-to-person contact rather than the faecal-oral route (postulated but not confirmed), their presence in faeces requires a more nuanced interpretation.

Recent studies in Australia, France, the Netherlands and the United States reported that the Ribonucleic acid (RNA) of the SARS-CoV-2 virus that causes COVID-19 was successfully detected in wastewater.

A technical brief from the World Health Organization, however, said it was likely that enveloped coronaviruses like SARS-CoV-2 are less stable in wastewater and more susceptible to chlorine, pH and temperature than most of non-enveloped enteric viruses like enterovirus.

There is no published study till date testing SARS-CoV-2 in aerosols from wastewater facilities.

A recent laboratory-scale study on persistence of coronaviruses in aerosols, however, revealed it could maintain its infectivity in aerosols for up to 16 hours, suggesting potential human health risks if wastewater aerosols contain viable SARS-CoV-2.

Further investigations are needed to elucidate the presence of SARS-CoV-2 and its viability in wastewater bio-aerosols and associated public health risks.

Treated water should undergo tertiary treatment (chlorination), as it is believed from past studies that free residue chlorine of lesser than 0.5 milligram per litre is sufficient for removal of SARS-CoV.

Experts, however, have been using sewage monitoring programmes to study infectious diseases like polio virus for many decades. Regular monitoring of wastewater even after the disease subsides can serve as an indicator to determine whether the pandemic has been brought under control.

Citing studies in many countries, sources said COVID-19 could be identified in faeces within three days of infection.

Wastewater research can help determine how much COVID-19 occurs in population and whether it is increasing or decreasing.

For a few weeks now, scientists around the world have been working on a wastewater-epidemiological test procedure that can be used to identify a regional occurrence of the virus at an early stage.

Researchers in Netherlands — the first ones to find SARS-CoV-2 in sewage — say wastewater surveillance can complement clinical testing to monitor the pandemic.

The wastewater-based epidemiology approach would help alert a population cluster to be better prepared with respect to the intensity of the virus found in the wastewater.

“Before we move into another lockdown, it is imperative that we have continued community monitoring especially in densely populated areas to serve as an early warning system,” Catalyst Group’s Angela Chaudhuri said. 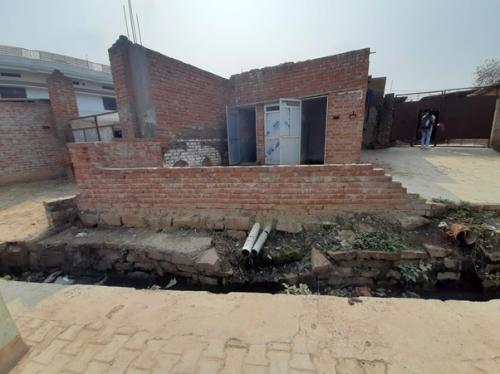 A septic tank overflows in an open drain in Chunar. Source: Bhitush Luthra

It is a wake-up call for authorities and sewerage boards, as safe water and sanitation is a far-fetched goal without integrating decentralised wastewater management and proper monitoring of existing infrastructure.

Also, whether labs testing sewage are equipped to test SARS-CoV-2 is a big question. Does this mean laboratories of research institutions should pitch in and collaborate to standardise the protocol of sampling and testing?

Even if it’s a yes, whether this will turn into an academic exercise done in different pockets of the country or become a method of surveillance of COVID-19, is a question authorities can answer best. 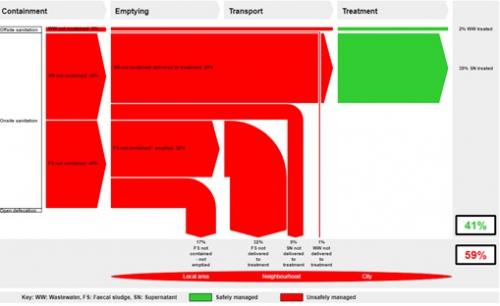 Let’s take the example of two small Indian cities: Bijnor and Chunar in Uttar Pradesh, with an approximate population of one lakh and 40,000 respectively.

In Bijnor, despite a sewage treatment plant and a sewerage network in place, the population of the city depends on onsite sanitation systems.

The treatment plant runs on wastewater tapped from open drains and not conveyed through the sewerage network, as household connections are not done yet. In the absence of any disposal site, faecal sludge collected by desludgers is often discharged in open drains or open fields.

Chunar — a small town next to the Ganga — does not have any kind of sewage treatment facility as of now.

The entire population is dependent on onsite sanitation systems, the streets are so narrow at some places that onsite systems have to be emptied manually, with desludged faecal sludge often ending up in open drains, if not disposed in the newly-built trenching facility.

Then there is mixture of grey water and effluent of septic tanks conveyed through open drains to the river. So, if one has to do surveillance, there will be multiple streams of excreta, as shown in the two Shit Flow Diagrams of Bijnor and Chunar that will have to be mapped before talking about any kind of surveillance. 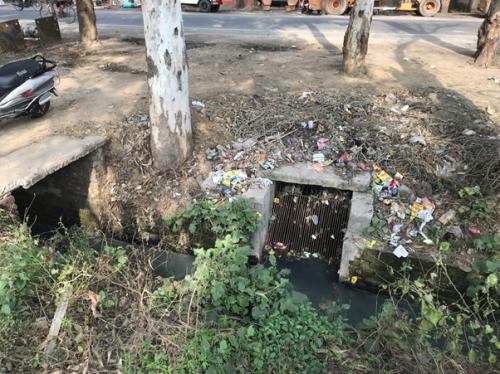 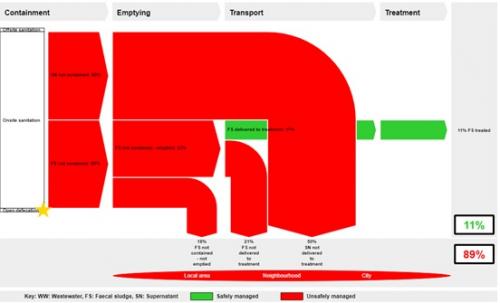 Thus, while wastewater surveillance has proven to be handy in case of other viruses, it is a sensitive tool: Even asymptomatic cases can be tracked, complement clinical testing, help understand spread of virus in the population and also provide early warning for reoccurrence.

We, however, need to answer two interconnected questions:

If the answer to any of these questions is negative, it might end up as another academic exercise benefitting only a few.