When markets do work 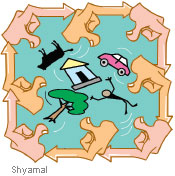 Some innovations change lives. A favourite of mine is the village milk collection system, a cooperative model. There's a dairy in the village, people bring in milk, the dairy in-charge places a sample on an instrument, checks the fat content, prints a receipt that tells the seller the fat content and the price.

Once a week, the milk-seller encashes receipts. As most villages do not have electricity, instruments and computers work on diesel generators. Every day the co-operative's van arrives to take the milk for sale in the nearby town.

In villages I visited last week, in arid Rajasthan, I saw this system at work. In the evening young girls, women and men streamed into the dairy. Their milk was checked, they collected their receipt. I asked them if they could read the numbers, written in English.

They did not know the language, but could read their receipts. Just consider the economics one buffalo gives roughly 5 litres of milk each day; people earn, depending on the fat content, Rs 15 to Rs 25 per litre. Even the poorest--one-buffalo owners--earn. The money reaches them directly, in their village.

Consider also that this village, Laporiya, has seen a back-breaking drought for the past nine years. Meteorological data shows the last good monsoon was in 1997; it rained 700 mm. Since then rainfall has varied from 300-400 mm, it comes in a few cloudbursts.

It is in this situation animals become the mainstay of the economy. Animal care is much less risk-averse than agriculture. The dairy is the vital link in adversity--it links people to the market. It helps them cope with scarcity.

Market and retail proponents must understand this system is simple but not simplistic. It provides for the poorest and most marginalised, by investing in improving the productivity of common grazing lands.

A critical move, for livestock need fodder, usually desperately short during -peak droughts. Lesser the fodder, lesser the milk. This is investment in hard-core infrastructure, critical for markets to function.

But today, across India, fodder is desperately short. Where there is land but no water for irrigation, farmers cannot cultivate crops, and so cannot use the bonus of residues for animals. The common lands--village grazing lands and forest lands--are over-exploited and under-productive.

In most regions, villagers have told me they spend Rs 12,000 to Rs 20,000 per year of their meagre earnings, on an average, to buy fodder. But this economy is underground. There is no fodder policy in India, no intervention to protect the grazing lands or improve the productivity of forestland for food for our livestock. This is the 'other' food crisis.

It must be understood that livestock is not wasted or inefficient. It plays a critical role in the village agricultural and livelihood economy--from manure to enhancing soil productivity and nutrition. But its food is nobody's priority. The pastures--reserved for animal grazing--have shrunk over the years; forestlands are the only remaining commons.

Foresters say animals are biotic pressures; they suppress regeneration of forests. They want domestic livestock out of these lands. Their concerns may be valid. But it is equally important to note that domestic animals will need forests, as much as wildlife. We need an explicit policy for this food crisis. We need to find answers.

For instance, the dairy in Laporiya works even in severe drought because it is connected to the common grazing land. In this village and its vicinity, the ngo Gram Vikas Navyuvak Mandal has spent huge energies to vacate encroachments from common grazing lands.

These lands are administratively under the gram panchayat, but over the years most have been taken over--not by the poor but by the powerful. It is a tense battle within the village to reclaim the commons. Laws to protect such lands are weak, the administration helpless. But without the supportive common pasture, there can be little private gain, particularly for the poor.

Reclaiming the commons is the first step towards regenerating these lands. In these villages a fascinating technique has been evolved, called the 'chauka' system, to trap the little rainfall they get and improve the grasslands.

The villagers dig rectangular trenches--less than 1 feet deep--to temporarily hold rainwater before it flows into the next trench and then the next and so into the tank. With this system in place, the village common land has become a grand water collection area.

The aim is to make the entire village a rain collection system, to recharge the aquifer, withstand drought. In neighbouring Sihalsagar village, every bit of land has been re-crafted for water--villagers have dug three big nadis (ponds), 25 small ponds and made chauka in their grazing land.

Every field has a bund; every drop of rain is trapped and harvested. As a result, the village has water even as its neighbours do not. Since work began on water conservation, the village has never seen bountiful rain. But it still has some water.

In other words, even meagre rain, if harvested, can provide sustenance. The issue then is to increase the productivity of each raindrop. If that scarce water is used for crops, it will benefit some and not all. It will also deplete the groundwater table, for farmers will dig deeper to get water for their fields.

The economy will not be sustainable. On the other hand, if that water is used to turn it into milk, it will add value to that scarce resource. If that milk is processed locally, so that more value is added, it will make the economy prosper. The market will work, but only if this politics of scarcity is understood.

In the dingy dairy of Laporiya I learnt last year, after nine years of persistent drought, when it rained less than 300 mm, the village of 300 households sold milk worth Rs 17.5 lakh. It was a valuable lesson. I will not forget it easily.