Government prefers not to talk about the 931,000 ha collected under land-gift movement 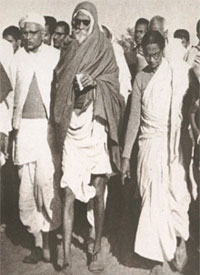 Gifting of land, or bhoodan in Hindi, is the current obsession of the government. It is on a spree of acquiring land. This is often termed as bhoodan to corporate houses. There is another kind of bhoodan that is being talked about. For a country that is demographically young, this bhoodan took place as a movement when India was just four years old. Then, it meant a gift from landed people, assumed rich, to the landless. But why contemplate that movement now?

First, it completes 60 years and we do not know what happened of those precious gifts. Second, the current bhoodan threatens to acquire the land—over 931,000 hectares (ha)—collected under the earlier bhoodan. There are widespread reports of taking over these tracts of land for developing projects. The government’s response to this is passive, if not mute.

Bhoodan Movement was started by Mahatma Gandhi’s disciple Vinoba Bhave in April 1951. Born spontaneously at an evening meeting in an Andhra Pradesh village, the movement saw land owners gifting land to the landless. Within six years, about 1.9 million ha were collected. Over the next two decades the movement took shape of a law called the Bhoodan Act and put the government in charge of distributing land from the land bank. The movement later transformed into Gramdan (village in gift) movement, under which the whole or a major part of a village land was donated by not less than 75 per cent of the residents for equal distribution among all village residents. Tribal areas, currently under vigorous land acquisition, were major participants in the Gramdan movement. Both the movements died eventually but left behind the land bank.

In the past six decades the government has distributed around 971,000 ha of the bhoodan land among the landless. Of the people who received the land many could not take physical possession as influential people encroached upon their land. There are over 931,000 ha more to be distributed. But the government does not talk much about this land bank. In fact, it does not issue a status report except for a stale five- to 10-line paragraph in a voluminous annual report of the Union ministry of rural development. There is no official record of these tracts of lands, their location and status, nor any serious effort to identify and distribute them among the landless.

Reports are that the government is now distributing land from the bank to housing, industrial and other projects. As this happens, the price of the bhoodan land goes up. This is where the nexus of local influential people and government officials come into picture; the land deeds are transferred to undeserving (read influential) people for a windfall. In a way, this has hastened usurping of the bhoodan land. Several documents on the status of land show that 50 per cent of this undistributed bhoodan land has already been encroached upon or transferred to undeserving people. In the absence of specific data, social activists working on land reforms cite instances of bhoodan land being given to corporate houses in nine states.

For example, in Andhra Pradesh the urban development authority of Visakhapatnam has allocated the bhoodan land for housing projects. The state government has allocated large chunks of the bhoodan land in Ranga Reddy district to industrialists; estimated market value of the land is Rs 1,500 crore. Investigations are under way into how the tracts were sold to companies in violation of the Bhoodan Act. A probe is also on in Maharashtra into bhoodan land grab by builders and housing societies involving politicians.

Several instances of land being given away to members of legislative assembly cutting across party lines have emerged in Bihar, where Chief Minister Nitish Kumar claims that distributing the bhoodan land is his priority. The Bihar Land Reform Commission recently unmasked one such scandal. The government’s land bank recorded a gift of 262,430 ha, of which only 103,335 ha had been distributed to 315,454 families and over 112,000 ha were shown as not suitable for distribution. There was no record of how the government reached this decision. There was no record of any verification.

“Without such verification the possibility of lands being utilized by unauthorized persons including land mafia cannot be ruled out,” the commission warned. Though distribution of the bhoodan land is a key activity under the government’s land reform exercise, it has not gained momentum. Instead, it has allowed the government to grab land meant for the poor. To streamline the system, in 2007 the Centre set up the National Land Reform Council with the prime minister as the chairperson. But it has not even met once. In October the prime minister will convene a meeting of the council. Hopefully, it does talk about the bhoodan land.