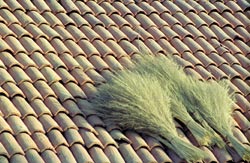 It has been three years since Sumani Jaghodi a tribal resident of Mandibisi village, Rayagada district, Orissa led a successful struggle of hill broom collectors in the district. She still cannot believe that her modest broom could overturn an enormously skewed forest law of the state. Till March 2000, the forest department had sole rights to bind and sell hill broom grass in Orissa. It procured this minor forest produce (mfp) from the collectors -- mostly tribal women -- and then sold it to traders, who marketed the final produce much to the primary gatherer's' detriment. Says Sumani, "We calculated the traders' profits and concluded that we could get the same money by binding and marketing brooms ourselves." So, in 1995 with the support of a local non-government organisation Agragami, she formed a group of women primary collectors called Mandibisi Mahila Mandal (mmm). In about five years, the group succeeded in turning things in the hill broom collectors' favour.

Hill broom grass (thysanolaena maxima) is found in a few Orissa districts, including Rayagada. This district can produce upto 5,000 quintals of hill broom per annum. That means an employment opportunity of one-lakh woman-days if the average collection potential per woman-day is taken as 6 kilogrammes (kg). Processing the broom means an additional opportunity for 1,80,000 woman-days if the average production of brooms per woman-day is 10 -- at the rate of three brooms per kg of the raw material. But recollects Sumani, "We walk 15 to 20 kilometers (km) through deep forest and hilly slopes to source the grass. Before March 2000, this was hardly rewarding. My daily income from about 10 kgs of grass was mere Rs 25 while traders got around Rs 50 from it."
The movement started in 1995 when mmm applied for permission to procure and sell broom grass but got no response from the authorities. In defiance the organisation procured around 174 quintals of the broom grass from primary collectors. The district authority termed this illegal since the Tribal Development Co-operative Corporation (tdcc) was the leaseholder for broom grass in the area. The corporation seized the 'unauthorised procurement' with help from the local police. But mmm now had popular support: the movement had spread to neighbouring villages. In 1996, the organisation appealed against the seizure and managed to get back some brooms. The government also advised mmm to apply for a lease to procure broom grass after tdcc's lease expired.

Accordingly, Ama Sangathana, a federation of the women's groups involved in the campaign, applied for lease on January 25, 1997 and got it in March same year. But that was limited to two years and the federation had to pay an annual royalty of Rs 75,000 to the Orissa government. But within a few months, the state high court ruled that the forest department could no longer monopolise hill broom grass and other mfp trade. Orissa's Tribal Advisory Council also ruled against such monopolisation. The state government complied partially: it told tdcc to compete with others for procuring and selling mfps. But the royalty provision continued. Finally in March 2000, a new mfp policy gave licensing rights of hill broom to gram panchayats. The forest department lost control over this mfp: traders now purchase hill broom products from panchayats and get marketing rights after paying a license fee to it.

Post March 2000, fortunes of Mandabisi's hill broom collectors have improved a lot. mmm's annual turnover is now Rs 2,00,000. During 2000-2001 primary collectors earned Rs 10 per kg of broom grass from traders -- much higher than the earlier minimum procurement price of Rs 8. In certain areas, collectors even got up Rs 15 per kg. The per quintal wholesale price of hill broom went up from Rs 200 in 1991 to Rs 3,000 in 2002. mmm's struggle has also given a spur to similar groups in neighbouring Kalahandi district. "Ours was a small struggle with huge ramification," says Sumani with justified elation.