A law unto themselves

After a gap of more than 30 years, Santhal tribals recently invoked an age-old practice of meting out punishment to a sex offender

A law unto themselves 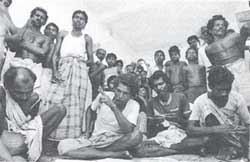 WHEN Ganga Murmu, a 5-month pregnant Santhal tribal of Bhangabandh village in West Bengal's Medinipur district, was raped in February by the son of the landlord in whose field she used to work, the members of her community decided to take the law into their own hands.

Instead of going to the police, the Santhals invoked their traditional system of justice involving the entire village community, which decreed that Lokaranjan Masanti, the offender, be beheaded. The Santhals equipped themselves with bows and arrows and attacked the landlord's house in Jamdohora, a neighbouring village. However, the administration had prior information of the attack and repulsed it. But tension is still simmering among the tribals.

Immediately after the rape, a series of meetings between the elders of the 2 villages were held but they failed to yield any result, especially as the Masantis claimed that Lokranjan was innocent. Then, at a community assembly, Bhangabandh's head priest Janaki Hansda issued a sajamgira, a diktat to behead, against Lokaranjan for dishonouring a Santhal woman. The attack on the landlord's house followed. When the attack failed, the Santhals even filed a FIR against Lokaranjan on March 31, a full month after the incident. The police arrested Lokaranjan, but the Santhals are still angry.
The death sentence on Lokaranjan was passed at a bitlaha, which refers to both a community assembly called to excommunicate an offender and the subsequent ceremony performed in the house of the culprit. The last major bitlaha recorded in eastern India was in 1962, according to The Gazetteer of the Santhal Parganas (see box).

A bitlaha is the most extreme form of punishment for a sex crime against the tribe. It can be called if a Santhal has sexual intimacy with a close relative or if a non-Santhal (dikku) has sexual intercourse with a Santhal. The basic function of the bitlaha is to maintain the purity of the Santhals as a tribe.

The Santhals fear their gods, called bongas. And one of the surest ways of incurring the wrath of the bongas is sex between a Santhal and a dikku. When such a case occurs, the chief of the affected village calls upon his neighbouring villages and tells the people to avoid the offender's family. After this, the final decision on excommunicating the offender is left for the day of the annual hunt of the Santhals.

The hunt is a traditional affair in which all men participate. After the hunt, criminal cases are heard. If a case merits a bitlaha, a date is fixed for it. On the evening before the bitlaha, people assemble to the beating of drums and playing of flutes and buffalo horns. The night is spent relating what British chronicles call "ribald" tales, singing songs with strong sexual overtones and frenzied dances.

On the morning of the bitlaha, people carrying bows and arrows rush into the village of the offender, all the while singing obscene songs and playing their musical instruments in a frenzy. If the headman of the village then meets the crowd on the street with a pitcher of water, the crowd halts. Usually the offender is sent for, and if he comes and begs for mercy, the bitlaha is not performed.

But if the offender runs away, the crowd proceeds to his or her house and places at the entrance a piece of charred firewood on a pole, a wornout broom and some used leaf plates. All this while, the young men dance in the nude, breaking pots and the chulha (earthen cooking place) of the house. After this an animal sacrifice is performed for the bonga and the crowd disperses.

Bitlaha implies that the culprits lose civil rights and they and their families are excommunicated. The excommunicated family is either harassed to leave the village or it can perform certain rites prescribed for rejoining society. These rites involve a feast for a large number of people within the village and outside, along with some symbolic rituals. The law of the tribals is more elastic than the codified modern system: bitlaha also has the provision of the accused to give up his old ways and be forgiven. And the entire process, from excommunication to again accepting the accused back into society is done by the community.


There are nearly 3.5 million Santhals in the country, settled in the Chhotanagpur plateau, the Mayurbhanj area of Orissa and parts of south Bengal. They are mainly employed in agriculture. British administrative official L S S O'Malley wrote in the Santhal Pargana Gazetteer of 1910 that in a Santhal village, the community owns the land. At the time of colonising virgin land for settlement, land was distributed by consensus. Permanent possession came from cultivating the land. Even then, land could not be alienated by the owner: when he died or abandoned the village, the land went into common holding.

The village headman (manjhi), chosen by the people, administers the rights, rules and ceremonies of a Santhal village. If there is anything that affects the village's interest, the manjhi calls the villagers to sit together and settle it. He also has the duty of calling the villagers together to settle any dispute, preferably within the village itself. Even when the dispute in between 2 villages, the attempt is to settle it in a meeting amongst themselves.

The involvement of the community extends into every aspect of Santhal life. Land that has not been occupied is considered common property. Forests and their produce are also for all to use, as are rivers and the fish in them. In fact, if someone dams up the river along its course, then that person invites others to fish in the dammed place.

Similar community control over the forests also exists. Santhal villages also have sacred groves where ceremonies and sacrifices take place, and which are protected from exploitation.

Justice for the Santhals is based on the participation of the whole community, something that today's codified law cannot offer. R K Jain, Dean of the School of Social Sciences at Delhi's Jawaharlal Nehru University, says that the recent bitlaha is part of a larger resurgence of tribal ethnic identity. "Their dissatisfaction with codified law arises from a combination of the non-seriousness with which the government has looked at the dikku problem and the erosion of the Santhals' communal system of justice by a less sensitive, centralised mechanism," he says.

Says social anthropologist B K Roy Burman, "In a bitlaha, violence is always directed against property, never against a person. This makes it less of an 'offence' in official eyes." He also views the revival of bitlaha as a reassertion of the tribal identity. "The traditional dignity and identity of the Santhal cannot be satisfied by the government or politicians," he says.

The government itself is ambiguous about how to view the bitlaha. Usually, the police tries not to interfere. "This is wise," says Roy Burman, "because police interference would escalate the tension." P C Roy Chaudhury wrote in the Santhal Pargana Gazetteer of 1956 that the bitlaha should be allowed to continue, with the adminstration restricting any "excesses".

The recent developments in Medinipur district certainly point towards a protest that the tribals are articulating by invoking bitlaha after 30 years. The protest seems to ask for a more sympathetic look at the traditional rights and priveleges of tribals and indigenous people.

As Jain puts it, "This revival of tradition is the manifestation of a resurgence of the tribal identity. It is the writing on the wall: these incidents will increase rather than diminish, if traditional rights are continued to be ignored".