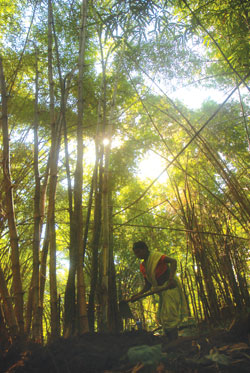 THE FOREST Rights Act, which empowers tribal people and forest dwellers to have absolute rights over their forests, has started a battle at the Centre. Two Union ministries—rural development and panchayati raj; and environment, forests and climate change—are putting pressure on the Union Ministry of Tribal Affairs to withdraw its stand upholding the landmark law enacted in 2006.

The problem started in March this year, when the Maharashtra government issued the Maharashtra Village Forest Rules of 2014, which sought to make communities declare forests under their jurisdictions as “village forests”. On August 13, the Union tribal affairs ministry asked the state to put on hold the rules because they were “prima facie” in violation of the Forest Rights Act (FRA).

Six days later, Nitin Gadkari, the minister of rural development and panchayati raj wrote to tribal affairs minister, Jual Oram, requesting him to withdraw his ministry’s objections against the Maharashtra Village Forest Rules. In his letter, Gadkari said that the rules were empowering the village panchayats in the state and that the state politicians were in favour of their implementation. He requested Oram to discuss the matter with the Union environment and forests ministry as the rules were issued under a law administered by the minsitry. Then on August 29, Union environment minister Prakash Javadekar wrote to Oram with the same request.

“It is shocking that Gadkari, whose ministry has nothing to do with the forests or tribal communities has been writing such letters to the tribal affairs ministry,” says tribal rights activist Madhu Sarin.

Activists say that the new rules, which emerge from the colonial Indian Forest Act (IFA), 1927, are the Maharashtra government’s latest attempt to stop forest dwellers from benefitting under FRA.

Under the new rules, the forest department sets the terms for communities’ access and use of village forest resources. The village forest management committees of the gram sabhas, to be constituted under the rules, are supposed to work under the supervision of forest officials. Even the extraction of minor forest produce such as bamboo can only be done by the communities as per the working plan of the forest department.

This is in contravention of the community forest rights provisions of FRA which give absolute authority to the gram sabha (village council) over forests under the community’s jurisdiction.

The new rules come at a time when several villages in the tribal-dominated regions such as Gadchiroli district have got CFR titles and are benefitting by trading in bamboo from the community forests, which were controlled by the forest department before the FRA was enacted (see ‘Major battle over minor produce’, Down To Earth, November 1-15, 2010 and ‘Bamboo rising’, Down To Earth, January 16-31, 2013). Many more villages in the state are also in the process of claiming CFR status to harvest and trade in bamboo and tendu leaves.

“It is precisely to subvert this process (of FRA) that the forest department has come up with the village forest rules,” says Mohan Hirabai Hiralal of non-profit Vrikshamitra, which has been associated with the CFR movement in Gadchiroli.

In the past, forest communites have demanded implemetation of the 150-year-old provisons because they were the only provisions relating to community forest rights before FRA was enacted. But the forest deaprtments refused to implement them (see ‘Unwilling states’).

According to the new rules, village forests will be notified only in the areas that are not covered under FRA or where communities have not got CFR titles. But the department has also subtly put a clause in the rules saying that “any gram sabha may, suomoto, make a decision, by resolution, to adopt these rules”. On September 17, the state government put the suomoto clause on stay, saying there was a confusion over its impact on CFR.

C R Bijoy of Campaign for Survival and Dignity says, “Through these rules, the forest department wanted to do two things. One, to declare areas that are yet to receive CFR as village forests. This is frightening because only a handful of areas have been brought under CFR so far. And two, through the suomoto clause they wanted to regain its control over community forests.”

The activist’s fear is not completely unfounded. On this Independence day, the state forest department distributed draft resolutions to gram sabhas and asked them to pass the same in the meeting so that they can be included as village forests. The villages that received the draft resolution included several CFR villages including Mendha Lekha, the first village in the country to get the CFR title in 2009. “Even though the suomoto clause has been put on hold after protests from communities, the danger of notifying new areas under Village Forest Rules still remains,” says Bijoy.

“There is no relationship between the two. Besides, if you have read the rules, you must have seen that it is clearly mentioned that the rules will not be applicable in CFR areas,” Saxena told Down To Earth.

Activists point out that the village forest provision has been misused in other states. “In Uttarakhand, forest officials were made a part of the van panchayats, the traditional community forestry institutions in the state, through a notification on village forest rules in 2001. Gradually the van panchayatswere made ineffective. A similar thing was done in Odisha in the 1980s,” says Sarin.

Tushar Dash of Odisha-based non-profit Vasundhara that works on tribal rights, fears that if Maharashtra pulls it off, other states will take the same route.

“Forest departments in almost all states are already looking for different ways to resist the implementation of CFR because they want to retain their control over forests,” he says.