A smile for the camera

At the capitals of three mining hotbeds, AVINASH KUMAR finds a battle to capture public imagination

A smile for the camera

Hoardings of mine owning companies and hot winds greet you once you exit the cool comfort of the aircraft at Raipur airport. Temperatures have been unusually high almost all over the country this year.

But on the second day of my visit to Raipur, I was offered some local explanations for the horrible heat wave. Some of the people I met blamed the weather on excessive mining in the region.

An outsider to Raipur, though, might be forgiven for suspending any thought about the heat generated by the mining operations. Their first impression about the mining big wigs is most likely to be a happy one. The signboards outside the airport boast about the education and health services the aluminium giant, Nalco, is providing to Chhattisgarh’s hapless women and children.

Similar billboards welcome you outside Bhubaneshwar and Ranchi airports as well. Children greet you with twinkling eyes and their mothers flash toothy grins as you make your way to the city. The hoardings, Nalco’s in Raipur, Jindal’s in Ranchi and Vedanta’s and Tata Steel’s in Bhubaneshwar, don’t really showcase the minerals these companies extract. Someone not versed with the mining industry might even be forgiven to think these companies are large international charities like Oxfam or Action Aid.

A newspaper in Raipur congratulated the Chhattisgarh chief minister for managing a 34 per cent increase in mining revenues in a year. The report pointed out that mining revenues in some districts like Dantewada and Korba increased by 300 to 400 per cent. Apparently, China is the largest consumer of these diggings. And as fate would have it, I actually sat next to two Chinese on the flight out of Raipur.

That brings us to another facet shared by the three states. We know very little about the deals cut every day between the state governments and the big private companies. At Raipur, I attended a consultation in which one speaker reported that out of the total MoUs signed by the Chhattisgarh government, 97 per cent pertain to mining alone. In Orissa, during the Tenth Five Year Plan, the agricultural sector grew at a rate of 3.1 per cent while the minerals and the industrial sector showed a growth rate of 15.4 per cent.

Another speaker at the consultation reported on how an industrial house runs a parallel administration in Orissa’s Raigarh district. Someone also described how an iron magnate redirected an international flight to Ranchi airport and also had an entourage of customs and other officials flown in from Kolkata to complete the basic paperwork of international emigration. Of course, the chief ministers of these states are lined up outside the airports to salute the business tycoons just like the tin pot dictatorships of Africa and Latin America.

The three states are similar in social composition. Dalits and tribals constitute 40-45 per cent of the total population of these states. Specific pockets, densely populated by tribals, diverge sharply from other parts of the state in basic development indicators. State government officials I met gloated that Chhattisgarh’s infant mortality rate is at par with the national average. What they did not tell me was in tribal districts like Bastar and Korea, the mortality rate is double the national and state average.

The English language papers I read in Raipur also did not mention this discrepancy— at least not while I was there. They did report, however, the state government’s claim that “it has posted more doctors than required at its primary health centres”. The government in Orissa is a little more candid. It does not obfuscate figures. Tribals and dalits constitute twothird of the rural poor. While the state literacy average is about 65 per cent, the largely tribal districts of Malkangiri and Nabarangpur have a literacy rate of 30 and 34 per cent, respectively.

Chhattisgarh and Jharkhand are young states: they were born in 2000— products of intense struggle. On an earlier visit to Orissa, five years ago, I noticed hope: people were agog about a young suave chief minister leading them to a modernized 21st century. Some of the hope has not extinguished. In Bhubaneshwar, a scholar proudly listed the growth rate posted by the state. Another scholar likened the stateof- affairs with what in African countries is called a resource curse. The revenues of the states have increa sed rapidly but the basic indicators of poverty also shot up to scary rates. An official I met said one can see how the desire to appropriate mineral resources can turn the local elite against their people. 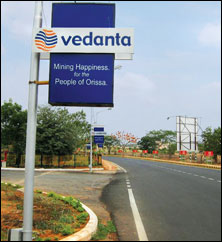 es I could see how. Earlier the state had the monopoly of ousting people from their residence and now it has been joined in by the metal brigade. At another consultation in Ranchi, I heard that Jharkhand is yet to hold its first panchayat elections. The people of this state still cannot benefit from the PESA Act (Panchayat Extension of Scheduled Areas Act) which was passed in 1995 and gave basic decision making rights to tribal people including control over their natural resources. It is not without a reason that the paper presented by the Planning Commission on Extremist Affected Areas devotes a whole chapter on the necessity to implement this law.

The day I reached Ranchi, the roads were empty and the city seemed unusually quiet. Human rights groups had called a three-day bandh to oppose Operation Green Hunt. In Raipur, the bloody memories of Dantewada were still raw. But amidst all this there was hysteria over the Indian Premier League. Some local papers in Ranchi basked in the glory of the cricket star from the town leading the Chennai team to victory.

It seems there is a battle to capture public imagination. There are stories of greed and untold struggles of the local people on one hand and on the other there are the media encomiums for the corporate Samaritans. There are also the happy faces on the hoardings.

I encountered them again on my way to take the flight back to Delhi. As I settled into another comfortable seat on the flight, I wondered why the corruption stories of the corporates in these three states do not make it to the media. The media, after all, is not impervious to stories of pelf. Perhaps the middle class does not see its image getting beaten by corporate corruption in Orissa, Chhattisgarh and Jharkhand. Perhaps it believes in the happy faces on the hoardings.