Acknowledging the role of the arbitrator

Acknowledging the role of the arbitrator 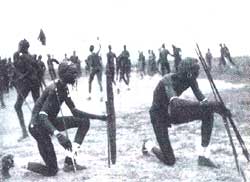 FIRST, Tamil Nadu chief minister J Jayalalitha began a highly publicised fast to back her state's claims to Cauvery water. Then, a flustered Union government came up with a proposal that presumably satisfied Jayalalitha, because she called off her fast. And, finally, Karnataka chief minister Veerappa Moily ungallantly played the spoilsport by rejecting the Centre's proposal outright.

So much for the efficacy of modern systems of dispute settlement, for the only outcome that is assured in the Cauvery dispute is that the water travails of the farmers of both states will continue and worsen.

In contrast, indigenous people the world over, from the Nuers of Sudan to the Sema Nagas of India, had ingenuous mechanisms and institutions to settle their disputes. Conflicts formed an essential part of their social life, but because they were regulated by tradition, they never destroyed the social order. Thus, despite not possessing a formal form of governance, these societies nevertheless had well-established codes of conduct that they had evolved over centuries.

This ingenuity can take many forms. Until recently, some Nigerian tribes resolved their civil disputes by chaining the plaintiff and the defendant to a log of wood in the hot, scorching sun. The sheer discomfort would force them to reach an early settlement.
The Nuer tribals of Sudan provide a good example of the working of tribal law. The Nuers were fiercely independent warriors and numbered about 60,000 till World War II, when the British bombed their cattle and totally crippled their economy. These tribals fought over various things such as cattle, land, women, prestige and damage caused by accidents. Differences of opinion and the interpretation of contracts or rules could also result in a fight. The Nuers had, however, established legal codes that laid down what was right and what was wrong, prescribed compensation amounts for offences and set norms for inheritance.

The tribes believed that local groups were the best units of dispute settlement because they had common local interests. These interests were represented by a group of arbitrators -- called "men of the earth" -- who would be called upon to help settle disputes. Though the arbitrators could neither coerce nor command people, they were recognised as political as well as ritual functionaries.

If a fight broke out, the arbitrator could restore peace by running between the combatants and hoeing up the earth. A murderer was considered defiled with blood and could neither eat nor drink until a purification ritual was conducted by the "man of the earth". If the slayer lived near the house of his victim, to avoid being killed by the victim's kin, he could seek sanctuary with the arbitrator, who would then negotiate between the two groups and induce the victim's kin to accept compensation. This would be refused initially, but the threat of a curse would ultimately ensure compliance.

The Nuers were essentially pastoralists who lived in the vast plains of the Upper Nile. During the monsoon, the river waters engulfed the plains and compelled the tribals and their cattle to retreat to higher ground, where they built their villages and cultivated millet.

When the flood waters receded, water was more easily available and so the younger people dispersed widely with their herds on the exposed pastures. But during the dry, summer months, the Nuers would again congregate with their cattle at low-lying spots where water could be found. Thus, groups of Nuers moved in rotation between their wet-season and dry-season homes. Groups separated by long stretches of flood during one month would camp together at the same water-hole in the next. Many a time they would have to drive their cattle through the territories of other groups to reach the water-holes. Under such circumstances, it was essential for the various groups to be on cordial relations with each other, both for their own safety and that of their cattle.

As food supplies were always scarce, the Nuers lived under the constant threat of starvation. Households and even small areas sometimes suffered severe shortages when their cattle was afflicted by disease.

E E Evans-Pritchard, a British anthropologist who studied the Nuers in great detail during the late 1930s, brought out in great detail the close relation between ecology and the social and political organisation of the Nuer tribes. He points out that ecological necessities forced the Nuers to associate in fairly populous groups for the production and distribution of food. They formed hamlets and villages and the residents of a district maintained a semblance of peace with those of other districts for the greater part of the year. But the ecological needs for such peace lessened with distance so that between districts at extreme ends of Nuer territory, it hardly existed.


The Nuers had no chiefs, but in each tribe there was a clan of aristocrats related to each other by genealogical descent through males from a common ancestor. Not all the members of the aristocratic clan lived in the same tribe and each tribe had members of many clans. The various districts of a tribe were linked together by their place on the clan genealogy. If one district was involved in fighting, all those related to it united against its enemies, who would similarly be joined by other districts. But if one them was involved in a fight with a more distant section, all the districts would unite against the common enemy. While thus allied, internal fights came under truce. And finally, when fighting against foreigners, the Nuers buried their internal differences.

But in this process, which Evans-Pritchard calls fusion of sections against larger groups and fission into sections when not involved against those larger groups, the Nuer recognised certain changes in the rules of war. Warriors of the same village fought each other with clubs, while those of different villages fought with spears. There was no raiding within the tribe for cattle. Fights between the tribes allowed raids on cattle, but women, children and granaries could not be touched. This rule was broken only the war was against foreigners.

The Nuer tribes are just an example, but arbitrators are common in disputes in almost every society. They draw strength from the people's collective desire to live in peace. Thus, among the Ifugao shifting cultivators of the Luzon Hills in the Philippines, the monkalun or the go-between played an important role not only in marriage negotiations, but also in deciding compensations. The settlement of disputes by the arbitrator was accepted by all parties and the decision was not open for renegotiation.

Tribal law generally operated on the principal that its rules were regarded as the obligations of one person and the rightful claims of another. Tribal civil law was a set of rules that controlled and regulated personal relations between kin, clans and tribes, settled economic relations, and decided the exercise of power, the status of husband and wife and of their respective families. However, the fundamental rules safeguarding life and property was criminal law, which also safeguarded institutions such as chieftainship, exogamy, rank and marriage.

The difference between civil and criminal law in tribal societies is often very thin and the major distinguishing principle is that anything threatening the cohesion of the group was considered criminal. The other difference is in the mode of enforcement. Criminal law has as its sanction tribal punishment resulting from the anger and indignation of the whole community. There was no need for a formal administration of justice according to a fixed code and as the community itself was the judge, the punishment varied from case to case, with the accused getting a fair chance to defend himself.

This account of the Nuer tribes is based on E E Evans-Pritchard's The Nuer and Max Gluckman's Custom and Conflict in Africa.