Will the idea of eco-development survive? 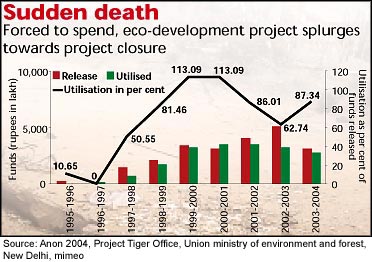 IEDP's larger monitoring mechanism, too, seems to have been primarily meant for the government or Bank consumption. The Bank sent its supervisory missions and its supervisors wrote 'aid memoirs' on whether project sites conformed to project conditions. Their memoirs were not made public, and shared only with the government.

The IEDP directorate, on the other hand, commissioned project reviews that -- even the Bank was forced to admit, at a select gathering -- failed at times. Instead of feeding into the project, reviews became just reams of paper generated because the project demanded so. And everything remained locked inside official drawers. Nothing was denied, but nothing was made public; an 'independent' scrutiny remained a pipe dream. Forget the average project beneficiary in the forest village, not even researchers and policy analysts were able to get these reports, unless government wanted them to. The right to information existed, just as the reports, only on paper. In Nagarhole, some groups had to file a petition in court and use the state's right to information act to get the forest department to divulge data.


Even the Centre showed a lack of will to institutionalise a project whose benefits everyone acknowledged, could flow much beyond its life. The Union ministry of environment and forests was to set up an eco-development wing, but it never materialised. It had to set up an eco-development project steering committee to guide the project on policy; this was formed but rarely met. There was to be an eco-development project implementation board with full financial and administrative powers; the board was never given these. Finally, a panel of three independent experts was to independently review performance; it was never set up. Why? Claims Gopal: these bodies would have gone against the union government's stated policy of downsizing ministries!

Regional coordination committees were to be formed in PAs, to stave off threats -- from the surrounding area -- the forest department could not control. District collectors were to be designated chairpersons of such committees, to influence and moderate land use near PAs. The committees never functioned, except in Palamau Tiger Reserve.


As EDCs gained in resources or money, they often initiated works that made them vulnerable to co-optation by vested interests, or panchayati raj institutions. But Buxa and Periyar apart, EDCs were not supported by the state's legal framework.


The larger question is: can these institutions, created at a cost of Rs 288 crore, survive beyond the project life? The government's answer is that it has carried out a study on this aspect. Truth is, Buxa and Periyar apart, the rest of the PAs have rarely thought beyond the next day. The question is not of mere survival but fulfilling the function -- conserving biodiversity by selecting a development path for people who live inside or on the fringes. Kalakad Mundanthurai Tiger Reserve, which successfully created a network of self help groups (SHGs), is already morphing. The 540 SHGs, which turned Rs 3.04 crore into Rs 10.98 crore by circulating credit, were meant to give primacy to the poorest, those most dependent on the forest (the villages were clearly demarcated on the basis of their dependence on forests). In the first round of credit lending the poorest were preferred. But today the money has become large enough for satraps to get involved and take over in some villages. Whether a person can return a loan, rather than his need, has become the criterion for giving loans. It is difficult to assess how much of this economic activity now helps reduce pressure on the forests and conserve biodiversity.

"Setting up institutions with funds is easy; raising the expectations of people, more so," says Pramod G Krishnan, deputy director of Periyar Tiger Reserve, who has been leading efforts to create a funding mechanism to sustain EDCs beyond June 30, when IEDP ends (see box: The Periyar model).

And if we cannot sustain the existing framework, can government fish for yet another loan? Krishnan admits, "This project more than anything has helped create an alternative thinking in some officers of the department, a vision where they do not look at people as antagonists." Is US $67 million the price for getting the government to do what it should have been doing anyway, without external inspiration -- helping people protect forests?